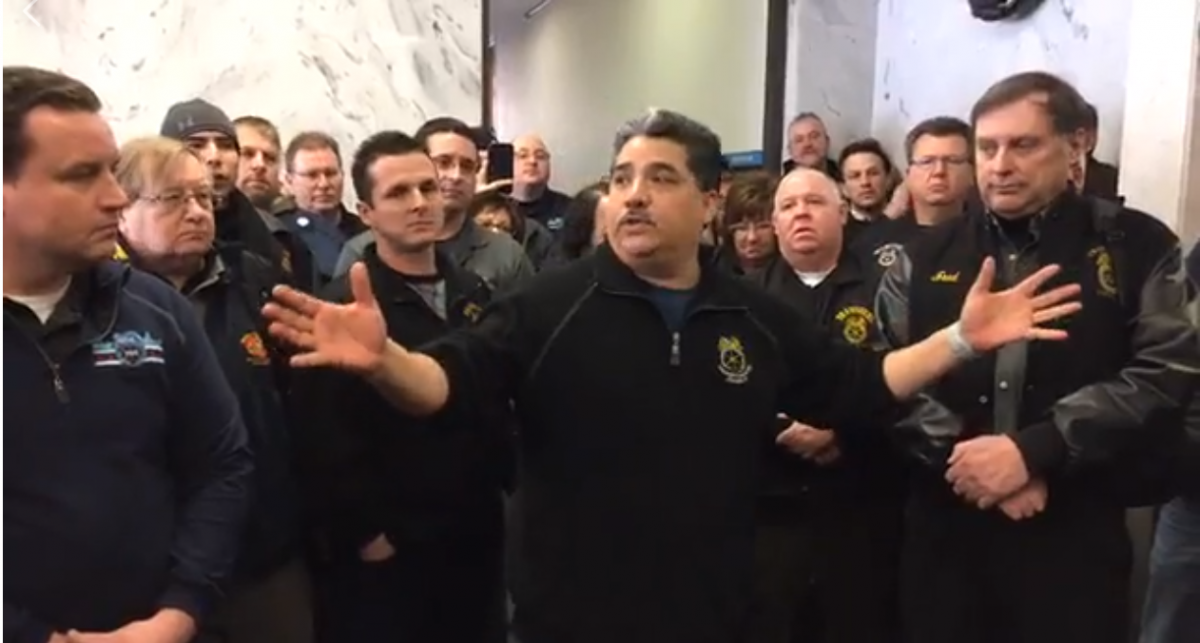 Flanked by Teamsters including Local 89’s Fred Zuckerman, Local 705’s Juan Campos announced he is joining the opposition to run for international union office in 2021. Photo: screenshot from a video by O’Brien Zuckerman 2021

“The straw that broke the camel’s back for me,” said Chicago Teamsters leader Juan Campos, “was seeing the international shoving the UPS contract down the members’ throats.”

That’s why he has joined an opposition slate to challenge the union’s top officers in 2021.

Campos announced January 31 that he will run for an at-large vice president seat, on the ticket with Sean O’Brien of Boston for president and Fred Zuckerman of Louisville for secretary-treasurer.

The slate he joined represents a new coalition formed last year. Zuckerman led the Teamsters United slate, backed by the rank-and-file network Teamsters for a Democratic Union, that won six vice president seats in the South and Central regions and lost the at-large vote by a nose in 2016.

O’Brien, a powerful joint council leader in the Northeast, was on the other side, backing Hoffa. But he finally broke from the administration last year during UPS bargaining and announced he would be teaming up with Zuckerman.

UPS workers around the country are still fuming that last October the union declared an unpopular national contract ratified even after members voted 54 percent “no.”

The grassroots vote-no movement, backed by Teamsters for a Democratic Union, had several major complaints: The deal would create a new low-paid tier of drivers. Raises for part-timers fell short. And it would do nothing substantial to address the epidemic of excessive forced overtime, technological surveillance, and harassment by supervisors.

UPS could certainly afford to do better. Numbers released this week show that the company finished out 2018 with a record $6 billion in profit.

To push the deal through, union tops exploited a loophole requiring a two-thirds vote for a “no” to stick. Teamsters who found this undemocratic are calling for the repeal of this "two-thirds rule" at the union’s next convention.

Campos’s Local 705 publicly mulled a strike last fall. The union’s 17,000 members include 8,500 Chicago-area Teamsters who have their own contract with UPS—that is, they’re not included in the national deal.

On major issues, Chicago’s contract tends to follow the national pattern. But after the union pushed through such a weak agreement, the local bargaining team declared it was determined to do better.

A strike just after Thanksgiving—the beginning of the frenzied peak season of holiday package delivery—would have been big leverage against UPS. It would also have taken a serious commitment from members, who count on the money they make in long hours of peak-season overtime.

Unfortunately, bargaining team members said the message they got from intermediaries speaking for Teamsters headquarters was clear: We set the bar. You can’t get more than we got.

“My phone kept ringing every time there was a proposal that differed” from the national deal, said Campos.

“We were both negotiating against the company and our own international union at the same time,” said Dave Bernt, a UPS feeder driver and bargaining committee member.

In particular, the international would not accept a pact that didn’t include the new Article 22.4, which allows package delivery work to be reassigned from full-time delivery workers to a new category of lower-paid hybrid drivers.

It was the Teamsters, not UPS, who proposed this major concession in the first place. Hoffa and his buddies weren’t about to let Chicago show them up by winning a deal without it.

What could Hoffa do? He could take away Local 705’s right to negotiate its own UPS contract—something he already did with the YRC Freight contract a decade ago. Or he could take over the whole local in a trusteeship.

The bargaining committee discussed those possibilities frankly. When it became clear that getting a contract without Article 22.4 was going to be “extremely hard, close to impossible,” said delivery driver Raul Medina, another bargaining committee member, “we figured, ‘We have to go another route. How are we going to protect our drivers?’”

Days before the strike vote was to take place, the local reached an agreement with UPS. Members ratified it January 27 in a 2,455 to 640 vote.

The deal includes Article 22.4. On that point, “we’re not selling it as a win to our members,” Bernt said before the vote. “It’s something we were forced to accept. However, we did negotiate some protections in that I think will put us in a better position to police the implementation of the 22.4 jobs.”

The contract solidifies a 40-hour guarantee for full-time drivers regardless of package volume. New work rules won’t allow any 22.4 workers to start driving until all the full-time drivers for that day are out on the road.

Bargaining team members are proud of other advances. One of the local’s top priorities was to increase pensions, and they did it—a rare feat in a time when many other Teamsters are fighting pension cuts and failing funds. Monthly payouts will increase by $200 for current retirees and a total of $600 for future retirees.

Local 705 also won a $15-an-hour minimum wage for current part-time workers, significantly better than the $13 the international got—though to placate union tops they put it in a side letter, as a market rate adjustment, rather than in the agreement itself. The higher rate applies only to workers on the payroll as of the date of ratification; new hires will get $13.

Bottom line: though he’s proud of the deal, Campos believes that with the international’s support, “we could have done a lot better.”

It’s part of the change he wants to bring to the union by running for international office. He also wants to shore up pensions, be transparent with members about how the union is spending every dollar, and put more money and staff into helping locals organize—including at the subcontractors that displace union workers as well as at competitors like Amazon.

The momentum against Hoffa continues to grow. New leaders propelled by anger at the UPS contract concessions took office in January in two of the country’s biggest UPS locals—Local 804 in New York and Local 767 in Dallas-Fort Worth.

TDU has not yet announced plans for 2021. But the rank-and-file group is sure to be a major factor in the election, as it has been in every Teamster contest since it won the right for members to directly elect the union’s top officers in 1989.

Once the full slate is assembled, supporters will need to gather 50,000 signatures to get the candidates accredited, then win enough local delegate races to win a vote at the union’s international convention to get their candidates nominated and onto the ballot. That’s also where they’ll get their chance to abolish the two-thirds rule.

Around the country—and now in Chicago—plenty of Teamsters are newly motivated to put in the work to leap those hurdles over the next two years. They say the events of this year show how much the union needs a change.

“If a contract gets pushed through,” the way the Hoffa administration did to UPS workers, “I believe you’re no longer working in the interest of the people that elected you to be in that position,” Medina said. “That is something I don’t believe Campos would ever do, or allow to happen as long as he has any kind of say in it.”

Correction: This story has been corrected to reflect that it was YRC Freight, not UPS Freight, where the international union took local bargaining rights away from Local 705.

Related
Brooklyn Teamsters Protest UPS Harassment of Black Shop Stewards »
Can Auto Workers Win the Right to Vote? Here's How Teamsters Did It »
Viewpoint: 'The Irishman' May Win an Oscar, But It Shouldn't Win Union Members' Hearts »
Teachers and Public Workers in Argentina: Four Months of Strikes and Pickets »
Reformers Take Back the Reins in New York City UPS Teamsters Local »
A Bad Day for Hoffa: Chicago Teamster Leader Joins Opposition Slate “The straw that broke the camel’s back for me,” said Chicago Teamsters leader Juan Campos, “was seeing the international shoving the UPS contract down the members’ throats.” That’s why he has joined an opposition slate to challenge the union’s top officers in 2021. Campos announced January 31 that he will run for an at-large vice president seat, on the ticket with Sean O’Brien of Boston for...