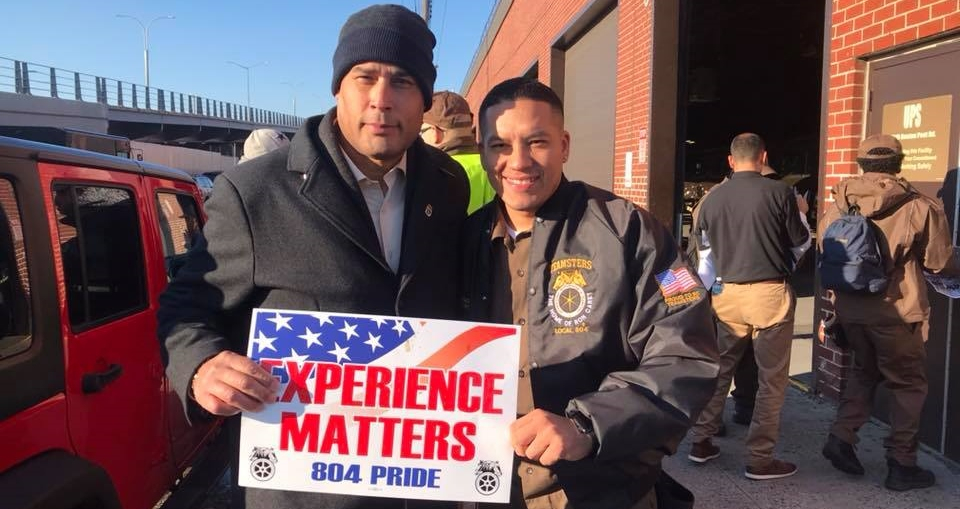 After Local 804 members repudiated their leadership with a 95 percent no vote on the UPS contract this fall, it was clear that “vote no” sentiment would translate to “vote them out.” Photo: Experience Matters

The biggest UPS local in the Northeast is back in the hands of reformers.

Teamsters in New York City’s Local 804 elected the Experience Matters slate far and away the winner in a four-way race December 20.

The winners are aligned with the Teamster reform movement. They were local leaders in the campaign that nearly toppled Teamsters General President James P. Hoffa in 2016, and have worked closely with Teamsters for a Democratic Union.

Their victory in the 7,200-member New York union follows close on the heels of reformers taking over the largest UPS local in the South, the 8,000-member Dallas-Fort Worth Local 767.

“Everybody is just fed up with the way their locals are being run by Hoffa cronies,” said Local 804 Vice President-Elect Chris Williamson, a 30-year UPS inside worker and former business agent.

The election results represent a return to Local 804’s briefly interrupted tradition of reform-minded leadership. Long ago this was the home local of Ron Carey, who went on to win the union’s national presidency and lead the 1997 UPS strike.

More recently, Local 804 was a thorn in Hoffa’s side for several terms under previous President Tim Sylvester. The union ran fierce local contract campaigns that improved pensions and added full-time jobs, while UPS workers nationally suffered concessions on pensions and health care. Perrone and some others on the slate were business agents on Sylvester’s team.

Then Hoffa operatives intervened in the 2015 election and won a squeaker of a four-way race. This administration participated in the bargaining team for this year’s unpopular UPS national contract, which creates a new lower-paid tier of delivery drivers and falls short of the $15 minimum wage part-timers wanted. (Nationally members voted the contract down, but Hoffa’s administration has indicated it will exploit a loophole to impose it anyway—though that can’t happen until various rejected local and regional contract supplements, including 804’s, are approved.)

After Local 804 members repudiated their leadership with a 95 percent no vote on the UPS contract this fall, it was clear that “vote no” sentiment would translate to “vote them out.”

Williamson said one of the new leaders’ first tasks will be to turn their attention to Local 804's contract supplement. The tentative agreement that members rejected, he said, dealt mostly with minor issues but didn’t touch the big things—confronting managers’ rampant harassment of workers, turning more part-time jobs into full-time ones, and limiting the number of the new second-tier hybrid driver jobs the company can create.

“Being there 30 years, this is the worst I’ve seen it, as far as the way the company treats us,” he said. “I believe everybody’s going to have to come together to fight. We’re not scared to fight the company.”

Alexandra Bradbury is editor and co-director of Labor Notes.al@labornotes.org
Related
No One Else Was Going To, So These Teamsters Saved Their Own Pensions »
In a Six-Day Strike, Bronx Produce Workers Doubled Their Raise and Inspired New York »
Opening the Door to a More Democratic UAW »
It's Been a Long Nightmare Before Christmas for UPS and Postal Workers »
Auto Workers to Vote on Direct Elections »