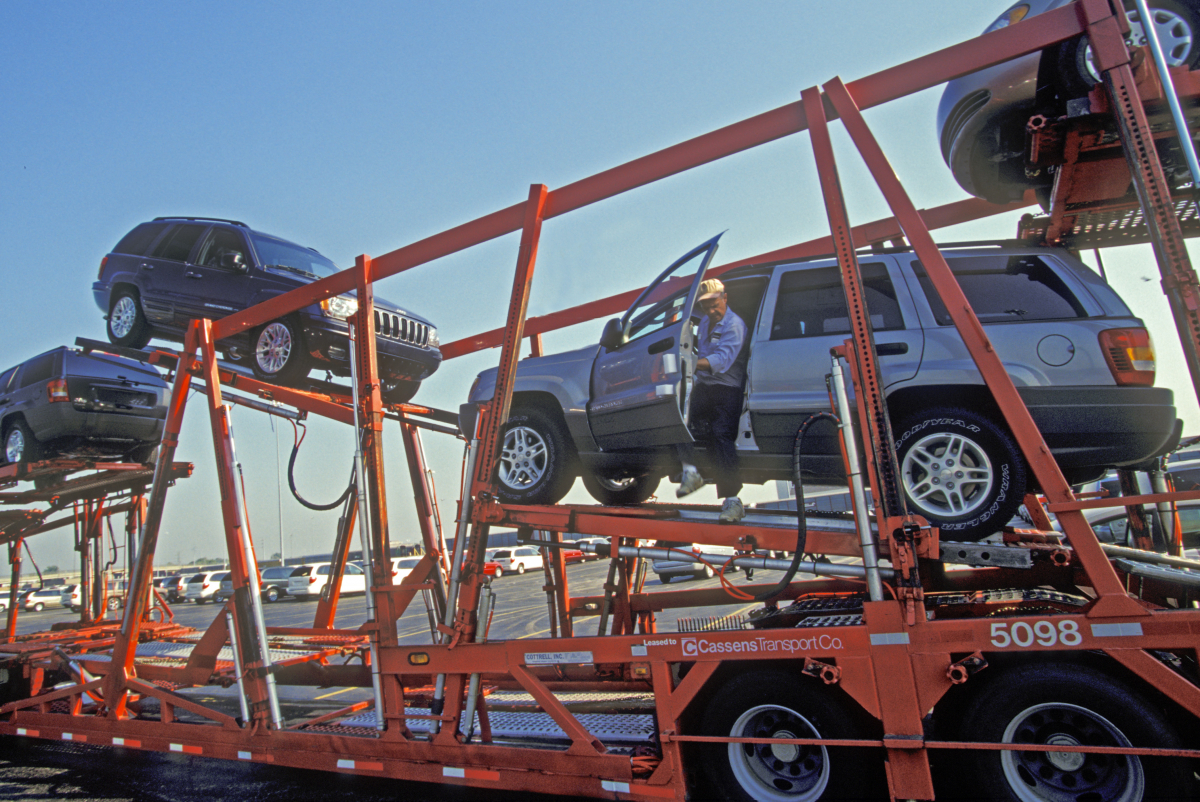 Teamsters who transport new cars to dealerships slammed a concessionary master agreement that "would have been the nail in the coffin of unionized carhauling." Photo: Jim West, jimwestphoto.com

Chrysler workers weren’t the only ones in the booming auto industry this fall to vote down a weak contract. Carhaulers—who transport new cars from auto plants and railyards to dealerships—slammed a concessionary deal, with 87 percent voting no in a mail ballot counted October 15.

The companies are “bursting at the seams now. They can’t haul enough cars,” said Fred Zuckerman, president of Local 89 in Louisville, Kentucky. “This isn’t the time you make concessions.”

For decades this was a solidly union industry. But in the late ’90s, the automakers and carhaul companies began colluding to shift work to new nonunion companies—and the Teamsters did little to fight back.

The rejected pact would have changed that, letting companies outsource work anytime they were short on drivers or trucks—which they perpetually are. “That would always be their excuse,” Zuckerman said. “They’d never hire another guy or buy another truck.”

“That would have been the nail in the coffin of unionized carhauling,” said Kirk Sikora, who drives for Cassens out of Smyrna, Tennessee.

The rejected deal would have cut wages, too, with a confusing new formula that took away incentive pay, fueling pay, and even loading pay.

Loading cars onto the huge trucks is the hardest part of the job. It can take hours, said Bill Frisky, who heads Local 964 in Cleveland: “You work on the docks in 17 below zero windchill, in blizzards. You work till your hands hurt so bad. It’ll beat your body up.”

And the deal would have eroded drivers’ control over their routes, giving the companies wider leeway to stack one head haul (a trip directed away from the driver’s home terminal) on top of another. Traditionally a driver tries to line up a backhaul to get home before hitting the limit of 70 hours’ driving in eight days, which requires a 34-hour break to reset.

“If you’re forced to sit in a motel for 34 hours, they’re only paying you for eight,” said Cassens carhauler Matthew Studd. “If you end up at home, you could spend the 34 hours with your family.”

Meanwhile, since carhaulers are in the Central States Pension Fund, they’re being hit with a double whammy. Trustees just sent out a letter announcing that working and retired Teamsters in the fund will suffer severe cuts to their already-earned benefits.

“All these years we took contracts on the assumption they were going to protect our pension,” said Kyle Shrader of Local 964. “If it weren’t for our pension, we would have negotiated for more raises.”

BACK TO THE TABLE

The international union has directed carhaul locals to hold meetings to find out why members voted no.

The reasons aren’t exactly a mystery to officers like Zuckerman, Frisky, John Thyer of Local 604 in St. Louis, and Tony Jones of Local 413 in Ohio.

Though they head some of the union’s biggest carhaul locals—and three of them have worked in the craft themselves—these four were conspicuously excluded from the bargaining committee.

No wonder, since they’re all candidates for international union office on the reform slate Teamsters United, headed by Local 804 President Tim Sylvester. Instead of appointing leaders with carhaul experience—but who threaten his power—President James Hoffa assembled “a yes-man committee,” Frisky said.

Zuckerman was on the bargaining committee last time around, before he and Hoffa fell out. He said it wasn’t just luck that the carhaul contract opened up at the same time as the Auto Workers’ contracts with the Big 3.

“I negotiated the last contract, and I made the expiration coincide with theirs,” he said. “We knew the auto industry would rebound and put us in a very strong bargaining position.”

Carhaulers are a tightknit group. Most have worked this job for years, and gotten to know their peers who work in the same terminals or stay in the same hotels along the highways.

They organized the no vote through Facebook groups and a series of conference calls that Teamsters for a Democratic Union helped arrange. The latest call drew nearly 1,000 participants.

Now what? Activists are pushing to add Thyer, Zuckerman, and Frisky to the bargaining committee. And if the union comes back with another bad deal, Frisky believes members will vote no as many times as necessary: “We have to keep sending them back to the table till they get it right.”