Interview: The Backstory to the Migrant Caravan Is Repression of Democracy and Labor in Honduras 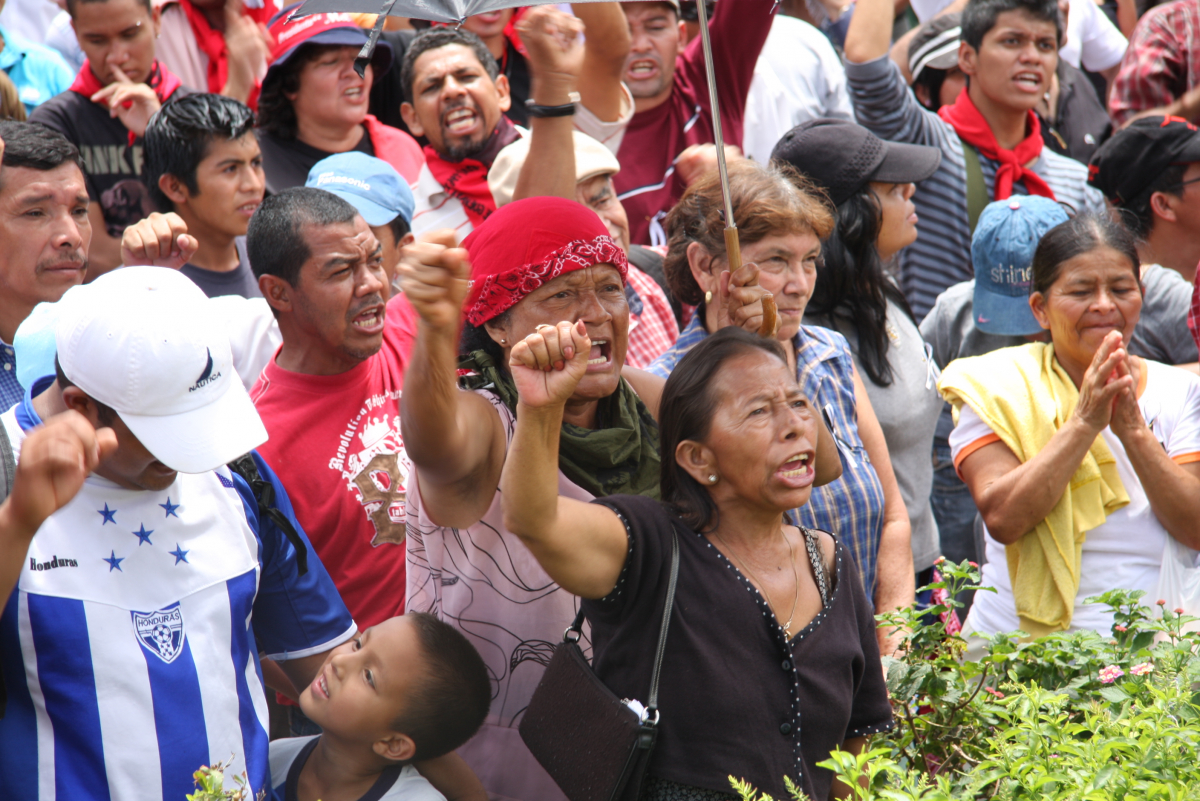 Honduras exploded in demonstrations following a coup by a general and the country's oligarchs in 2009 that ousted President Manuel Zelaya. The post-coup regime, propped up by the U.S. government, has waged a war on workers and democracy, a crucial backstory to the migrant caravans arriving at the border. Photo: Francesco Michele, CC BY-NC 2.0

For anyone who cares to know why thousands are fleeing Central America alone and in caravans, what role the U.S. has played in creating the crisis there, and how unions, workers, and popular organizations are fighting back, historian Dana Frank’s new book is a must-read.

I took my first trip to Honduras in 2009, less than two months after a general and Honduran oligarchs had staged a coup d’etat. They removed the elected president, Manuel Zelaya, in the middle of the night, shooting up his back door and packing him off to Costa Rica in his pajamas. They made a brief stop to grab a plane at the local U.S. Air Force base.

Honduras exploded in demonstrations, repression, and the killing of innocents. There was widespread outrage in most of the Americas, except the U.S.

When I got there, the resistance was already well organized and major leadership was coming from the labor movement. I attended resistance meetings at the Bottlers Union (STIBYS), which represented workers at InBev (Budweiser) and many soft drink companies.

I marched miles along with tens of thousands of Hondurans, many of whom were destitute but still picked themselves up and walked across their beautiful and mountainous country to get to Tegucigalpa or to San Pedro Sula to protest. It was truly inspiring.

Today Honduras is a dictatorship propped up by the U.S. Democracy was never restored. Despite all the protests, things are worse—it’s become a narco-state.

Dana Frank is a professor, recently retired from the University of California-Santa Cruz. She’s my kind of professor—an activist and a labor historian. Her book Buy American: The Untold Story of Economic Nationalism is one of my favorites; I’ve been touting it for years to all who think that “Buy American” campaigns are pro-worker. She also wrote Bananeras, about the women’s banana unions in Central America.

Her new book is called The Long Honduran Night: Resistance, Terror, and the United States in the Aftermath of the Coup. I spoke with her for our local radio show, the Heartland Labor Forum. –Judy Ancel

Judy Ancel: Let’s start with the fact that Honduras was called the first “banana republic.” What does that mean? And are bananas and banana workers still important to the economy?

Dana Frank: Hondurans today think that “banana republic” is an insulting term. It has been called that for many years, because it was under the control of the United Fruit Company and the United States for decades and decades.

Honduras did have as many as 60,000 or 70,000 banana workers in the ’60s and ’70s. There are fewer now. They had the strongest labor movement in Central America for decades.

Bananas still matter today—the banana companies, Chiquita and Dole are still down there, though they don’t have the political power or dominance that they used to.

But the banana workers are one of the two backbones of the private sector labor movement, along with the bottling plant workers.

Tell us about the coup—why did it happen, and why did the Obama administration endorse it?

The president who was deposed in the coup, Manuel Zelaya, came from one of the two right-wing parties that had ruled Honduras for decades. But he was moving to the center, even the center-left.

He had doubled the minimum wage. He was starting to align himself with the democratically elected left and center-left governments that had come to power in South America and Central America in the previous 15 years.

Those governments were a threat to U.S. domination of the region, and Zelaya was the weakest link. He didn’t have a mass base. He didn’t come out from the opposition party himself. So the U.S. was sending a message to all those governments that we are going to overthrow you.

We don’t have a smoking gun that the U.S. actually greenlighted the coup ahead of time. But we do know that afterwards the U.S. made it very clear they wanted the coup to stabilize.

Talk about the resistance. To me it was just overwhelming, the diversity of the resistance movement, and you cover that very well in this book. While the resistance has had its ups and downs, it still exists almost a decade later.

Initially the resistance was this huge coalition, with the labor movement, but also the women's movement, the Afro-indigenous people’s organizations, the campesinos [small farmers], the women’s movement, the LGBT movement, and also the people from the traditional Liberal Party and even the other ruling party, the National Party, who were committed to the rule of law and constitutional order.

After about two years, through complicated machinations, certain elements of the resistance turned it into a political party. That party, Libre, has been extremely important ever since—but it also widened a divide between those who thought electoral action was the most important priority and those who wanted to keep building the social movements from the base. Labor movement people span both camps.

The labor movement is still struggling, but sometimes it can actually achieve important victories. People don’t know that the maquiladora export processing sector has unions. They don’t have a lot of gains because of those unions, but in some cases they do. And many of the banana workers have good, solid union contracts, and bottling plant workers, too.

There are also public sector union people who are very strong in the opposition. The government has been going after them and eliminating whole government departments that were unionized over the last five or six years.

And the social movements of indigenous people to protect their lands against hydroelectric dams and mining projects go on as we speak. People have probably heard of Berta Cáceres, who was central to one of those struggles and was assassinated in 2016. The campesinos’ struggle to reclaim lands that elites had taken away from them in the Aguán Valley also continues.

Most people in the United States know very little about Honduras. In the reporting on the caravan, nobody is asking why these people are pouring out of Honduras. The media never connects the dots. What did you learn about the media as you researched this book?

After some initial reporting about the coup, some of which was good and much of which just ignored the human rights violations, there was complete silence for two years.

In 2012, when it became clear that things were going south fast, there was some coverage about how terrible things were. The next moment was in 2014, the so-called “crisis” created by Breitbart News of 57,000 unaccompanied, undocumented minors arriving at the U.S. border.

Then the coverage was: “Things are really terrible down there. Everyone’s powerless.” My classic is the powerless mother sobbing over her son’s dead body in the morgue. The Washington Post, for example, covered that kind of story.

You would have never have known that there was the biggest opposition political party in Honduran history thriving, that there were strong unions, a strong women’s movement.

We’ve really seen this with the caravan. It’s as if Honduras is a natural disaster. You just have a country that can’t govern itself somehow, or that’s just naturally poor.

U.S. support for the regime, and the dictatorship’s repression, and the post-coup regime’s destruction of the rule of law, which opened the door for the gangs and the extortionists, and the fact that they’re deeply embedded with drug traffickers themselves at the top of the government—that narrative disappears.

And of course they don’t point out that the Trump administration has cut all development aid and is just giving them bullets and tear gas.

It’s actually more complicated than that. Trump said we should cut everything, but the State Department hasn’t done that.

The position of the opposition, and of the solidarity movement in the U.S., is to cut the security aid to the police and Honduran military who are killing people with impunity, and also to look at the economic development aid and who it’s really going to.

There’s a great line from a friend of mine’s book—he says the U.S. has historically trained people to think that the only solution to problems caused by U.S. intervention is more U.S. intervention.

Hondurans will say, “Please leave us alone. Let us have our own democratic processes.”

The Honduran opposition, and many groups from the center as well, are calling for a new election. It’s very clear that current president Juan Orlando Hernandez stole the election a year ago.

We need to be listening to what the Honduran people are saying. Let them have their own government, not one imposed by the United States.

We’re going to reintroduce the Berta Cáceres Human Rights in Honduras Act at the beginning of the year, which calls for a suspension of U.S. security funding in Honduras. We had 71 members of the House on it in the last two years. We need to get all those people back on.

Our local Congressman Emmanuel Cleaver has signed on to the Berta Cáceres law, and has been very cooperative. Now that we have a new Congressperson from the Kansas 3rd District, we’re hoping that she also will become supportive of human rights in Honduras.

We have so many Congressmembers on there because of grassroots support. They don’t just randomly support these things. They do it because if they’re good, they listen to what their constituents want.

Talk about the current president, Juan Orlando Hernandez. Hondurans call him “Juan Robando” [“Juan the Robber”], or they just refer to him as his initials. “Fuera JOH” [“Out with JOH”] is all over the walls in Honduras—they can’t seem to white it out fast enough, because it reappears. Can you talk about his policies, especially toward workers?

He himself is a criminal who supported the coup and overthrew the Supreme Court in 2012.

Honduran labor law isn’t so bad, but it’s not getting enforced—even in really famous cases, like the melon workers, or banana workers, or maquiladora workers, that gain international attention. In terms of the public sector workers, they’re getting laid off. Forget bargaining—they’re having their whole jobs eliminated.

It’s definitely a war on the workers, but that is possible because of this larger context of repression.

For example, a year ago when people were protesting the stolen elections, the military and the police used live bullets against peaceful protesters and bystanders. That’s the first time they’d used live bullets, even since the coup.

This is an edited and abridged transcript of an interview that Judy Ancel did with Dana Frank on the Heartland Labor Forum on December 27, 2018. Listen to the interview at heartlandlaborforum.org.