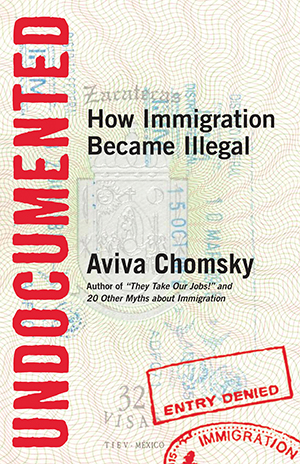 On November 20, 2014, President Obama announced a series of executive actions on immigration. Up to 5 million of the estimated 11 million undocumented immigrants in the United States will be protected from deportation. In addition, parents of U.S. citizens and lawful residents who have been in the country for five years or more will be able to request employment authorization.

The reaction from conservatives was swift and predictable. Heritage Foundation President Jim DeMint described the order as an “attempt to put out a fire with gasoline.” Senator Ted Cruz accused Obama of being “openly desirous to destroy the Constitution and this Republic.” Twenty-four states have filed challenges in federal court.

As the cries of “what part of illegal don’t you understand” escalate, it is useful to review the larger context of this country’s immigration practices. Fortunately, Salem State University professor Aviva Chomsky recently published “Undocumented: How Immigration Became Illegal,” a comprehensive look at the history of our immigration system. Chomsky reminds us that the concept of illegal immigration only came into existence 50 years ago.

Before World War I, the government only excluded 1 percent of the 25 million who landed at Ellis Island, and those exclusions were primarily for health reasons. In 1929, entry into the U.S. without inspection became a misdemeanor. But it was not until 1965 that Congress enacted a quota mechanism that applied to all countries.

Given that Mexican and Central American immigrants accounted for three-quarters of the growth of the undocumented population between 1980 and 2008, it is worth noting that the Mexican border was virtually unpoliced and crossings were rarely restricted until 1924. In a further historical irony, the current dividing line between the two countries is a product of the U.S.-Mexican War of 1846-48, prompting the saying in the Southwest, “We didn’t cross the border, the border crossed us.”

Chomsky argues that the current debate is based on artificially created assumptions, suggesting that countries, sovereignty, citizenship, and the laws that define them “are all social constructions” and she insists that “the idea that countries are such discrete entities is inherently flawed.” Whether or not the very notion of national sovereignty is defective, there is no question U.S. immigration policies appear to be irrational, a combination of intended and unintended consequences.

Roughly half of the undocumented population consists of those who have overstayed legal visas; the other half entered the country illegally. Chomsky vividly describes the dangers of border crossings and the horrors that have been visited on the tens of thousands of Central Americans who have been murdered on the “Train of Death” from Chiapas, or kidnapped and held for ransom payments from relatives already in the United States. Men and women routinely risk their lives to flee civil strife in their native lands and to seek economic opportunities in El Norte.

Dysfunction Works for Some

However, our system is not simply in chaos; the state of dysfunction actually works well for powerful constituencies. The human ebb and flow has always been part of a strategy by American employers to reduce costs by driving down wages. As U.S. manufacturers began outsourcing labor to Third World countries in the 1970s and 1980s, businesses that needed to remain on American soil insourced immigrant workers in order to accomplish similar goals. Regardless of the era, legislative remedies have not limited the corporate appetite for a workforce whose uncertain legal status makes them easy to exploit.

For American labor and community organizations, there has always been a tension between respecting the human rights of all workers and the view that immigrants represent a threat to wage standards. The notion of raising pay by controlling the size and quality of a workforce–whether a labor union or a professional association–runs counter to the concept of open borders and limitless replacement workers. Like some immigrant advocates, Chomsky threads this needle with the claim that “immigrants don’t take American jobs” (her italics). This may be true of agricultural jobs, but it is hard to sustain that position in industries where the shift from high-waged union jobs to low-waged non-union jobs has coincided with the emergence of a sizable undocumented workforce.

Meatpacking was once a strong union industry with a mostly Eastern European and African-American workforce. The jobs were dangerous and dirty, but by 1970 the typical meatpacking worker earned 20 percent more than the average factory worker. In the following three decades, urban unionized plants shut down and re-opened on a non-union basis in rural areas actively recruiting Mexican and Central American workers. Wages fell by 45 percent and, by the end of the century, one-quarter of the industry’s workers were undocumented. In 1980, nearly half the workforce was unionized; today fewer than 1 in 5 is a union member.

Construction has followed a similar story. Once a pathway to the middle class, building trades jobs have become poorly compensated outside of union strongholds in the Northeast, Midwest, and West Coast. Fifteen percent of the nation’s construction workers are now estimated to be undocumented, and the numbers are even higher in the lower paid non-licensed crafts, such as carpenters, painters, roofers, and laborers. These workers are often paid off the books and subject to unsafe working conditions. A 2013 Texas study estimated that half the state’s construction workforce was undocumented and 41 percent were victims of wage theft. It is a disservice to immigrant advocacy to maintain that existing Americans don’t want these jobs. It’s the sharply reduced compensation and sweatshop conditions they don’t want.

Progressive groups have shifted political positions on immigration policy over the years. In the 1970s, the leadership of the United Farm Workers campaigned against illegal workers, arguing that they were undermining the gains won by Latino farmworkers who resided in the U.S. on a permanent basis. In 1973, the first employer sanctions were enacted–with the support of the AFL-CIO and the NAACP–in an attempt to focus on the source of the problem rather than blaming the victims. (A 1952 bill had made it illegal to conceal or harbor–but not to employ–an undocumented person.)

The landmark 1986 Immigration Reform and Control Act (IRCA) regularized the legal status of 3 million immigrants and included employer sanctions, once again supported by the AFL-CIO, NAACP and the Leadership Council on Civil Rights. But penalties under the sanctions provision required that the employer “knowingly” hired undocumented workers, virtually impossible to prove.

It quickly became clear that actual enforcement ignored the employers and targeted the workers instead. For example, federal agents raided the Agriprocessors meatpacking plant in Iowa owned by the Rubashkin family in 2008. Most of the workers were from two small villages in Guatemala and 75 percent were undocumented. While 389 of the 900 workers were arrested, the Rubashkins went untouched. As Chomsky points out, “becoming undocumented is a highly racialized crime.” The on-the-ground enforcement schemes caused the NAACP to reverse its position on sanctions in 1990; the AFL-CIO followed suit in 2000.

Chomsky proposes abandoning all border control and abolishing the category of “illegal.” Her maximalist position is unlikely to gain much political traction at a time when Obama’s order has provoked such controversy. Will incremental steps matter? The National Employment Law Project (NELP) has suggested that the president’s plan “will make a world of difference for undocumented construction workers” because the ability to work legally will allow the assertion of rights and the elimination of fears of retaliation. While that may be overly optimistic, our experience organizing undocumented carpenters in New England has been that many are ready to grasp an opportunity to challenge the exploitative conditions they often face.

The immigrants who build our buildings, serve our fast food, and clean our offices deserve all the protections of workplace laws and the right to organize. But if there is one thing our nation’s history has demonstrated, it's that U.S. employers are unlikely to abandon the search for a low-cost labor alternative.

Mark Erlich is Executive Secretary-Treasurer of the New England Regional Council of Carpenters.