Moral Mondays Renew the Spirit of the Civil Rights Movement 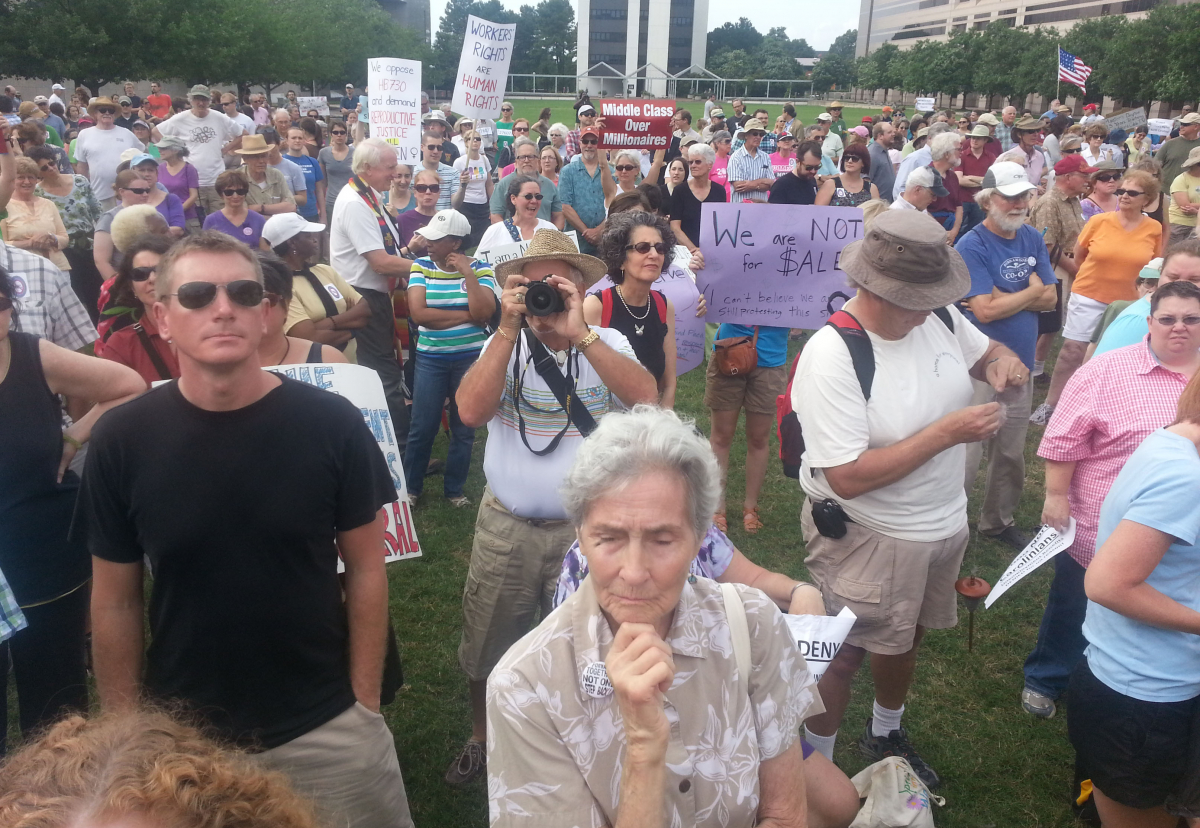 Every Monday, hundreds or thousands of demonstrators are protesting the all-out assault on human rights and worker rights in North Carolina. Photo: Nichele Fulmore.

I have been fascinated with the Civil Rights Movement for a very long time. When I was born in 1971, the movement was over and the Civil Rights Act had passed, opening up many doors for me as an African-American woman.

But now in North Carolina, the Republican-dominated administration is regressing the people of this state back to the days of Jim Crow.

They have put forth a very radical agenda: restricting voting rights, cutting Medicaid for 500,000 people, raising taxes on 900,000 working poor, cutting pre-school for 30,000 low-income children, and rejecting federally funded Emergency Unemployment Compensation—causing 70,000 to lose their unemployment benefits and thousands of others’ benefits to be cut.

For the first time in my life, I am seeing the people of North Carolina come together, to fight this radical agenda by protesting at Moral Mondays. Thousands of people come out each week to say No.

I attended July 1 in support of the unemployed. A cousin affected by these cuts attended with me. After working in manufacturing for 21 years, the industry she worked for moved to Mexico, leaving her jobless in this economy.

Her situation has opened her eyes to how important it is to be involved in social and political issues. At this particular Monday, it is speculated that 1,500 to 2,000 people attended, and nearly 100 were arrested.

My cousin and I understood how our brothers and sisters in the ’60s felt when they came together to fight the “Goliath” of their day.

Rev. William Barber, president of the state NAACP, has vowed to continue having Moral Mondays as long as it takes to repeal this radical agenda. A very positive thing that is coming out of this movement is that labor unions are joining the fight, which may open up some doors for them in the future.

Moral Mondays continue to bring people together from all different backgrounds. We are uniting to insist that North Carolina represent all of its people, instead of a few.

Nichele Fulmore is a member of Teamsters Local 391.

Related
North Carolina Nurses Seek Their First Union »
North Carolina Teachers Shut Schools and Flood the Capital for a Day »
They Don’t Need a Majority To Get Things Done »
In North Carolina, Fast Food and Moral Mondays Movements Build Ties »
Tens of Thousands in North Carolina Vow ‘Not Now, Not Ever’ »