They Don’t Need a Majority To Get Things Done 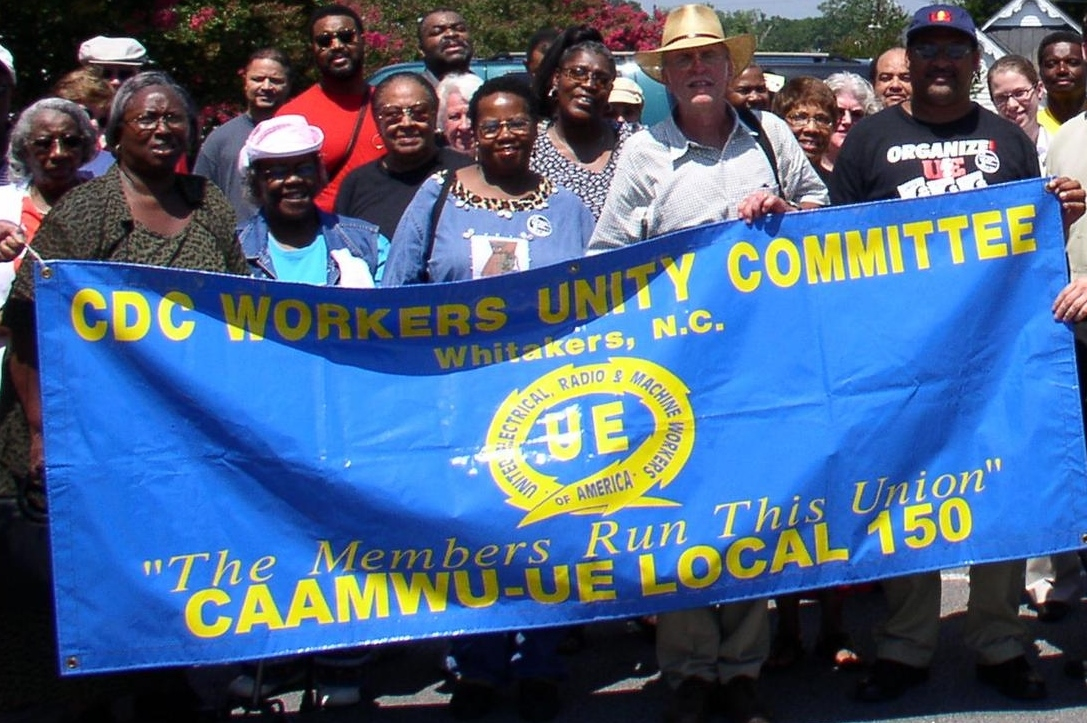 Members of the non-majority local at the North Carolina Cummins diesel engine plant celebrate a wage victory. Even without recognition or a contract, the union has made gains through group actions like petitions and sticker days. Photo: UE Local 150.

Workers at the North Carolina Cummins diesel engine plant won wage increases this summer—even without having a recognized union or majority union support inside their shop.

It all started last summer when management decided to give raises to one set of workers, the skilled workers who already earn more, and nothing to everyone else.

The double standard upset many employees, including the skilled workers, said Jim Wrenn, a 30-year employee. So he and other activists gathered more than 300 signatures to protest the decision.

“Even though we have no contract and no recognition, our union is alive and well,” Wrenn said.

They wrote about the issue in their union newsletter, Unity News, which they’ve been distributing for 22 years. In the newsletter they reported the profits, over $1 billion, made by the company while it claims to not be able to afford an across-the-board raise. They passed out copies to as many as they could of the 1,000 employees.

When the company’s board of directors and CEO visited the plant in October, several hundred workers wore stickers that said “RMEP Workers Want Fairness.” While the plant managers tried to shield the board and CEO from union activists that day, when they joined even non-stickered employees in the lunchroom they got an earful about the unfair pay policy.

Cummins’ CEO had already gotten a letter from the group of workers to make their case about why they wanted a raise. The CEO was even spotted reading Unity News during his visit.

Workers continued to wear stickers and agitate on the issue—and in May, management changed its tune, offering an 80-cent raise to the rest of the workforce as well. “Clearly the message got across,” Wrenn said. This was larger than the raises they had received in the past (or the 75 cents they demanded) and was in addition to merit raises.

UNION ALL THE SAME

For 20 years workers at the Rocky Mount Engine Plant have worked with the United Electrical Workers (UE), using the minority union strategy to get management to hear their demands, address problems, and improve pay.

The workers are both skilled trade workers and production and operations technicians who work on the diesel engines. They call themselves the CDC Workers Unity Committee, and they’re part of the Carolina Auto, Aerospace and Machine Workers Union, a manufacturing branch of UE Local 150.

They have fought for and won a wage scale, raises, and paid holidays—all through petitions, sticker days, and other group actions.

“These are the key things in our arsenal that have been effective over the years,” Wrenn said.

They also filed and won a lawsuit when workers were denied part of their promised bonuses. The company claimed it hadn’t made enough of a profit in 2002 to give the entire bonus—but because of the suit, an audit proved that the company was lying, and that it had violated state wage and hour law. The workers won in 2006, getting the company to give them back pay in addition to the merit raises they had already received.

They later won improved wage scales, after demanding a sit-down with management.

The company always denies the changes have anything to do with the union. But most workers in the plant knew the latest victory is the result of the union’s actions. “Even people in management congratulated us,” Wrenn reports.

Next, workers want to use this momentum to take on other problems at the plant. Wrenn said management wants to reduce the number of vacation days workers can carry over from year to year, and make reductions in their yearly bonuses.

Maintenance workers at the plant are subcontracted, but Wrenn and the other union activists try to work with them too. For example, when the subcontracted workers didn’t get the raise they were promised, UE activists used their newsletter to spread the word around the plant while they were fighting for their own raises—and the workers were later given raises plus back pay.

Wrenn and other UE activists continue to sign new people up in support of their union. They don’t yet have enough members to win majority recognition—but they do have enough to make an impact.

A version of this article appeared in Labor Notes #426, September 2014. Don't miss an issue, subscribe today.