The Only Way to Survive Janus 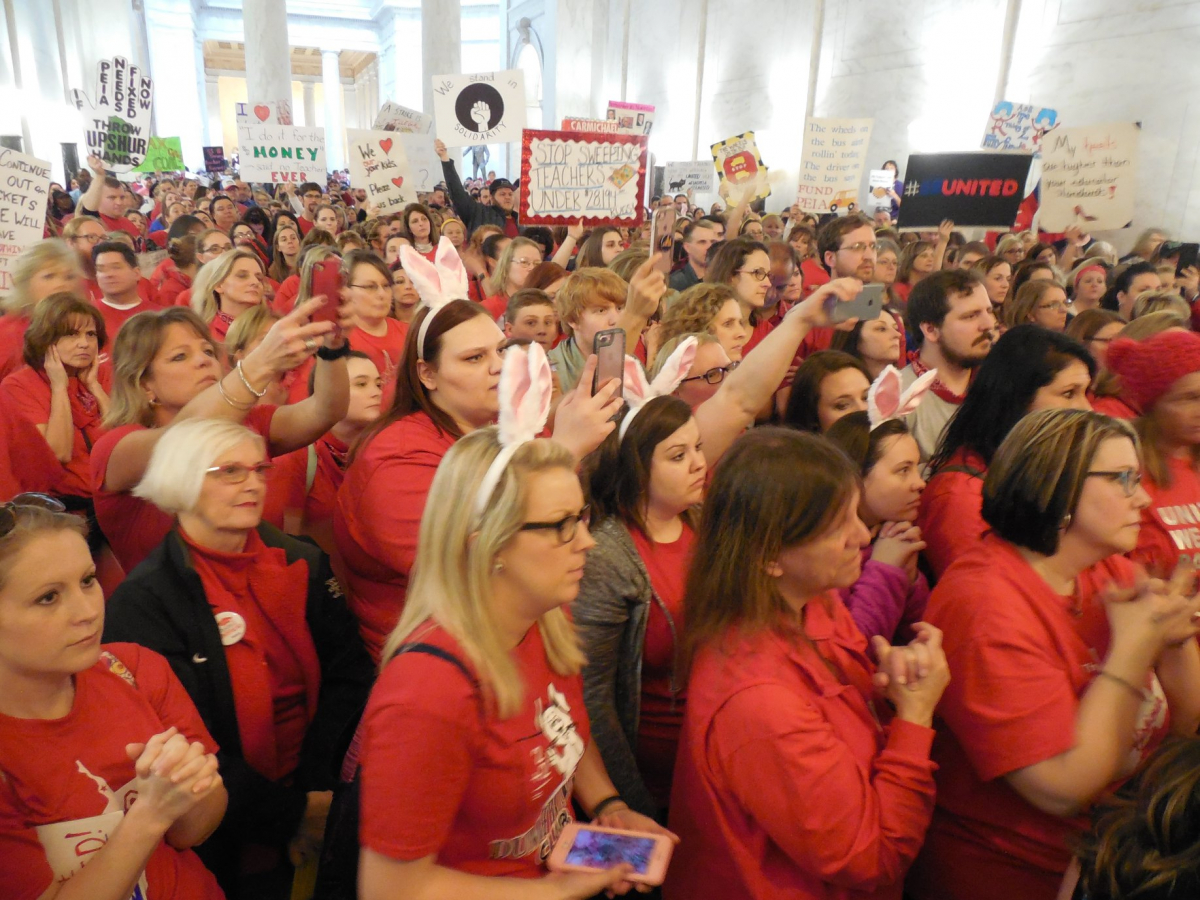 Leaders need to welcome, not begrudge, rank-and-file initiative, and to do everything they can to help it happen. Pictured: When the West Virginia governor called teachers "dumb bunnies," they got out their ears. Photo: WVEA Communications.

The snows were still flying, but for unionists, spring came early this year. West Virginia’s teacher uprising burst onto the scene like rhododendrons opening: first one walkout, then another, and before you knew it a statewide strike was in full bloom.

The strikes were born at the grassroots, and that’s how they spread. Classroom teachers passed the word on Facebook, organized school votes, and rallied at the capital. Union leaders followed their members, but never took the reins.

No one seemed much concerned that public sector strikes are illegal in West Virginia. “What are they going to do, fire us all?” said Jay O’Neal, treasurer for the Kanawha County local.

It didn’t take long for the spirit to spread to underpaid teachers in three other states—thus far.

Their actions drove home a point that’s crucial for anyone who wants to see the labor movement survive. What’s required is members organizing themselves like those teachers did.

As our readers know, the labor movement is in crisis.

Twenty-seven states have “right-to-work” laws and, very soon, the Janus case at the Supreme Court is expected to make the whole public sector right to work.

That makes union democracy more important than ever for union power.

Democracy means a culture of control by the members (not just formal rules such as fair election procedures, though those are important).

Union leaders can make bold demands at the bargaining table or in the legislative halls. But neither the boss nor the government is moved by strong words. What moves them is action—as the West Virginia teachers demonstrated when they held out for their raise, and got it.

A union’s power rests on how many workers will act together and how strong an action they will take.

IT’S NOT SERVICE VS. ORGANIZING

What does this have to do with democracy?

For years now you’ve heard unionists draw a distinction between the “servicing model” and the “organizing model.”

The service model is based on reps providing a service for members, such as filing grievances. The organizing model asks members to get involved and do things for themselves, like join a march on the boss.

But this distinction doesn’t get to the heart of the matter. Filing grievances and marching on the boss are both essential activities for a strong union.

Sleepy union locals are often as weak on the service as they are on the organizing. At our Troublemakers Schools around the country we meet plenty of frustrated members who say, “I wish I could get my rep to file a grievance!”

And some unions that profess to follow an organizing model can be top-down, run by staff. Members may be asked to show up for rallies, phonebank, knock doors, or have their photo in the union newsletter—but they’re not part of making the strategy.

When members are treated like a faucet that leaders can turn on or off for effect, they’re not really being organized, just mobilized.

People won’t stay involved for long if they don’t have real input. An open shop just heightens this problem. If unions have only shallow connections to their members, when people get the chance to opt out, they will.

Even if West Virginia’s teacher union leaders had wanted to, they couldn’t have called members out on a sudden, two-week unlawful strike by decreeing it from the top. The strike wave worked because teachers devised the strategy, owned the strategy, and believed in it. It was theirs.

This is why democracy is not simply a moral question—we need it if we’re going to survive. Union members need to exponentially expand the number of us who have the skills, confidence, and authority to be the union. Leaders need to welcome, not begrudge, rank-and-file initiative, and to do everything they can to help it happen.

One of the principles that guide us at Labor Notes is that the issues to organize around are the on-the-job concerns that shape people’s daily lives.

Pay and benefits are obvious, but here are some others: Does your supervisor harass you with nasty comments? Are you constantly monitored by cameras?

Can you reliably take your breaks, chances during the workday to rest your feet and rest your brain? To joke with your co-workers? Or do you work alone?

Is your workload increasing? Does your job make your wrists ache all night, or put you at risk for cancer, or heatstroke?

Do you get some autonomy in how you approach your tasks? If you work with the public and they treat you disrespectfully, are you required to smile?

If you can build an organization that tackles these questions, people will flock to join—open shop or not. The unions that build power in open-shop America will be the ones that fight hard on workplace issues their members care about, and where large numbers of rank-and-file members take on their own fights.

To become this kind of organization, many of our unions need a serious overhaul, a transformation from bottom to top.

Unfortunately, some union leaders aren’t interested in building this kind of militant, member-run organization. They may find the idea threatening to their own little fiefdoms. In those cases, running for office to replace them has to be part of the solution.

That’s why the most influential strikes of my lifetime—by UPS Teamsters in 1997, Chicago Teachers in 2012, and Verizon workers in 2016—were all built on top of fights for union democracy.

In Chicago, for instance, teachers fed up that their union was doing nothing to fight school closings formed a caucus and started doing it themselves. Soon their following far outstripped anything the union leadership had going.

Before and after they won office, the heart of their approach was engaging more and more members in taking action and devising strategy. The result was their electrifying 2012 strike—and all the other teacher insurgency it has helped inspire, including this year’s wave.

It was only after organizing a sickout at her school this year that Arizona teacher Kassandra Dominguez decided to join the union. She and other teachers had hesitated before, out of fear: “Would a union be able to protect us, since we are a right-to-work state?”

Those doubts make sense. Why would you stick your neck out to join an organization unless you’re convinced it has power? Unions prove themselves through deeds, not words—so it’s a big mistake to focus your union’s Janus prep on refining the sales pitch for membership.

What boosted the confidence of Dominguez and many others like her was a direct experience of collective action. To grow, unions need to come through to support bottom-up initiatives like these—and foster many more of them.

A version of this article appeared in Labor Notes #469. Don't miss an issue, subscribe today.

Alexandra Bradbury is the editor of Labor Notes.al@labornotes.org
Related
'It's Different Here' Is No Excuse »
Viewpoint: Don’t Fall for the Members-Only Unionism Trap »
How to Jump-Start a Weak Union to Fight Open-Shop Attacks »
2017 Year in Review: Turning Lemons into Lemonade »
NYC Building Trades Make a Stand at Biggest Project since Rockefeller Center »