Bracing for Right to Work, Public Sector Unions Up the Ante 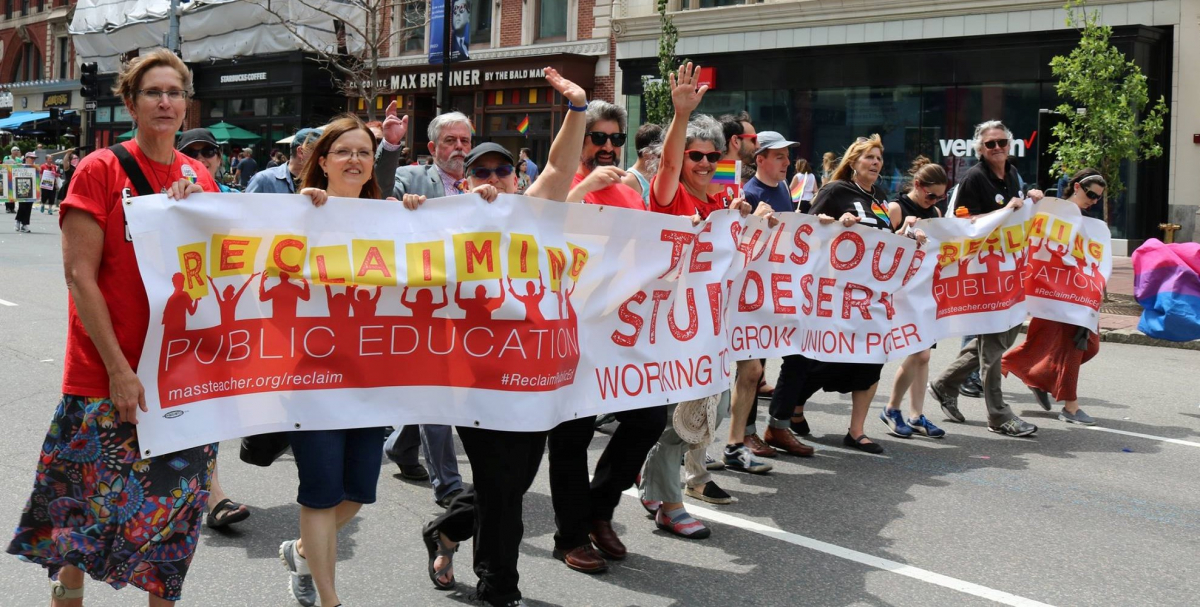 The whole public sector will likely become “right to work” next year, barring another miracle at the Supreme Court. Photo: Massachusetts Teachers Association

The whole public sector will likely become “right to work” next year, barring another miracle at the Supreme Court.

Once the conservative majority rules in Janus v. AFSCME, likely before June, life will change for unions in the 23 states that till now have rejected right-to-work laws. Public sector unions in those states will no longer be able to collect “agency fees” from workers whom they represent but who choose not to join their locals.

Agency fees, charged to non-members to cover the cost of bargaining and representation, are typically at least 90 percent of union dues, and in some cases are equal. But under Janus, non-members will pay nothing.

If that weren’t bad enough, in states such as Wisconsin, Michigan, Iowa, and Indiana, the passage of right to work has been packaged with even more measures to hamstring unions and limit collective bargaining.

The Supreme Court ruling is just “the first of many hits that we are going to take,” says Barbara Madeloni, president of the Massachusetts Teachers Association (MTA). “But what we have that Wisconsin didn’t have is an opportunity to prepare.”

The commitment card is an organizing tool that can serve several purposes.

Second, it serves as documentation in case the employer tries, after Janus, to make the union start from scratch in signing up members.

Third, the date on the card creates a narrow and individual time frame when a member is permitted to quit the union, usually a year after signing. This is a common strategy already used in open shops, sometimes negotiated in the contract. (Note, though, that it might not hold up to legal challenges down the road; in Michigan the state appeals court said unions cannot limit when members may quit.)

Fourth, and most centrally, the card is a tool to measure the union’s reach into the workplace, and to make sure members have been inoculated about right to work before the decision drops.

Recognizing the threat for several years now, big national public sector unions such as AFSCME and the National Education Association have thus far focused on convincing agency fee payers to become members. But today, unions realize that current members are also at risk of quitting and that a more ambitious engagement strategy is needed.

Most unions would agree that building stronger connections with members and non-members alike is key to survival. But some locals are building leadership structures inside the workplace that can not only keep member numbers up but also lay the basis for shop floor campaigns—where members act on their own behalf on the job.

AFSCME Local 3299, which represents University of California campus and health care employees, is a good model.

The 22,000-member local is preparing for Janus at the same time that it launches a contract fight. That way workers are encouraged not just to join the union but to use it to actively fight management.

The union settled its previous contract in 2013 after multiple short strikes, and used that momentum to prepare for a predicted loss of agency fee when the Supreme Court heard the Friedrichs case. (That Janus predecessor became deadlocked in the Court when Justice Scalia died last year.)

During that campaign, the local built up Member Action Teams (committees in each workplace with an ideal ratio of 1:10) and signed up 4,000 agency fee payers as members. The MATs have now turned to signing up existing members on commitment cards. Their goal is 90 percent.

This time around, the local also waged a six-month campaign for a membership vote to increase dues from 1.5 to 2 percent, knowing that after Janus it will have to spend more money on full-time and part-time organizers.

In Massachusetts, MTA launched its “All In” campaign this fall not just to hang on to members but to develop record levels of activism in the union.

The union is fresh off last year’s big victory against a ballot initiative that would have expanded charter schools in the state. The new campaign will deploy 10 organizers for 15 months to work with locals and train them on identifying leaders and having organizing conversations.

MTA is offering resources and support to locals that want to participate in the campaign. While the campaign includes signing up new members, “it has to go beyond card signing and just talking at someone about why it matters to be in a union,” says Madeloni. Local leaders are enlisted to “find things members care about and develop a plan [to win them]. That has to be a key part of what we are training people to do.”

“You can’t put it up on your webpage or only put it out in your newsletter,” says Maureen Posner, president of the Springfield local. “It’s not going to be enough.”

In Posner's local, building reps (stewards) at each school are tasked with getting each member to fill out an updated contact form. Reps are encouraged to chart their buildings. “That’s a way to test which buildings are organized,” says Posner.

The local has identified buildings that don’t have a rep and are now pushing to recruit one rep for every 10 members. Building reps will share their experiences when they bring back the first round of cards to their next meeting.

California’s Electrical Workers (IBEW) Local 1245 is preparing its 2,500 public sector members, including city and public utility workers, for Janus as if they were joining the union for the first time.

The union has launched a card-signing campaign, aiming to re-sign 100 percent of current members. Rather than pile that job on top of stewards' existing duties, they’re reaching out to other respected workers willing to work on union building.

The local starts with a small group of volunteers in each workplace, who are asked to recruit a representative committee of members, and to make a plan to launch the card signing.

These unions' campaigns all look to achieve these goals:

1. An accurate worksite and membership list.
2. A representative organizing committee.
3. A super-majority of the workforce signed up on new membership cards.
4. Campaigns on issues members care about.

Steps toward these goals build on each other. Through a campaign, you find new leaders who step up and join the union leadership team. A representative leadership team can better update existing lists and sign up more members.

And by showing a visible union fighting on issues a lot of workers care about, more will join and stay active in the union.

Volunteers also get education on the issues. In August, they were invited to a public-sector-wide meeting to learn about the union difference: What are wages and benefits like for comparable jobs in right-to-work states? What are contracts like? Research shows weaker contracts, lower pay, and fewer job rights.

At Sacramento Regional Transit, Connie Bibbs, a maintenance worker and steward, is on a committee that set up Q&A’s at each bus station to talk about Janus. Each volunteer on the committee started with 10 assignments, people to talk to in their work area.

Bibbs says their diverse 25-person committee includes different work areas and social groups. “We realize some people might be more comfortable with certain people,” she said.

Each committee plans its own campaign. Leaders in the City of Redding launched theirs by having a member BBQ and inviting family and community, to show that the importance of strong unions goes beyond the workplace.

The union at Glendale Community College in California faced a tough situation: like many faculty and grad student unions, the local had high turnover, especially among adjuncts. Only 66 percent of workers were members in 2015.

With support from their statewide union, the California Federation of Teachers, Glendale activists formed a Membership and Mobilization committee (M&Ms) and practiced one-on-one conversations. They organized pizza parties after work to give updates on contract talks.

At those meetings they sought out non-members and new employees. “It wasn’t just signing up people to be members, it was giving people the opportunity to get involved,” said Zohara Kaye, the local’s president at the time.

But adjuncts don’t work full schedules or have offices, so the local took other steps to reach them. They pulled up class schedules and made a plan for every person. Each M&M had a membership card and an update about the contract campaign to give to potential members, often right after their class ended.

M&Ms even left campus to find potential members at their second jobs or at local libraries. “Most people were extremely pleased,” Kaye said about newly signed members, “and we had a face to put a name to.”

In two years the local grew from 66 to 95 percent membership. And then it signed existing members on new cards.

Meanwhile, in contract talks, the administration was pushing for pay cuts, so the M&Ms' pitch became, “Come stand with us to show you support a fair salary deal,” Kaye said.

When the call went out to pack a board of trustees meeting, 200 people (a fifth of the membership) showed up. Kaye was expecting 50. And when the local finally reached a contract that fought off concessions, the bargaining team made sure there were material wins for everyone, including higher raises for adjuncts.

The open shop is the rule for private sector workers in 28 “right-to-work” states, for public sector workers in 25 states, and for federal workers all over this country. That means workers covered by a union contract get to enjoy the benefits of representation without being members or paying dues.

But even in states and sectors where membership is legally optional, some unions have high percentages of workers signed up as members. How do they do it? Read more from:

For a short exercise to help your union start preparing to survive an open shop click here.

For advice on how to orient new hires to the union (and sign them up as members), click here.

For examples of unions that have turned things around and become a more visible presence in the workplace by fighting on issues members care about:

For more in-depth examples, check out our books:

And for more from our "Organizing in Open-Shop America" series, click here.

A version of this article appeared in Labor Notes #464. Don't miss an issue, subscribe today.