Minority Union at Volkswagen, For Now 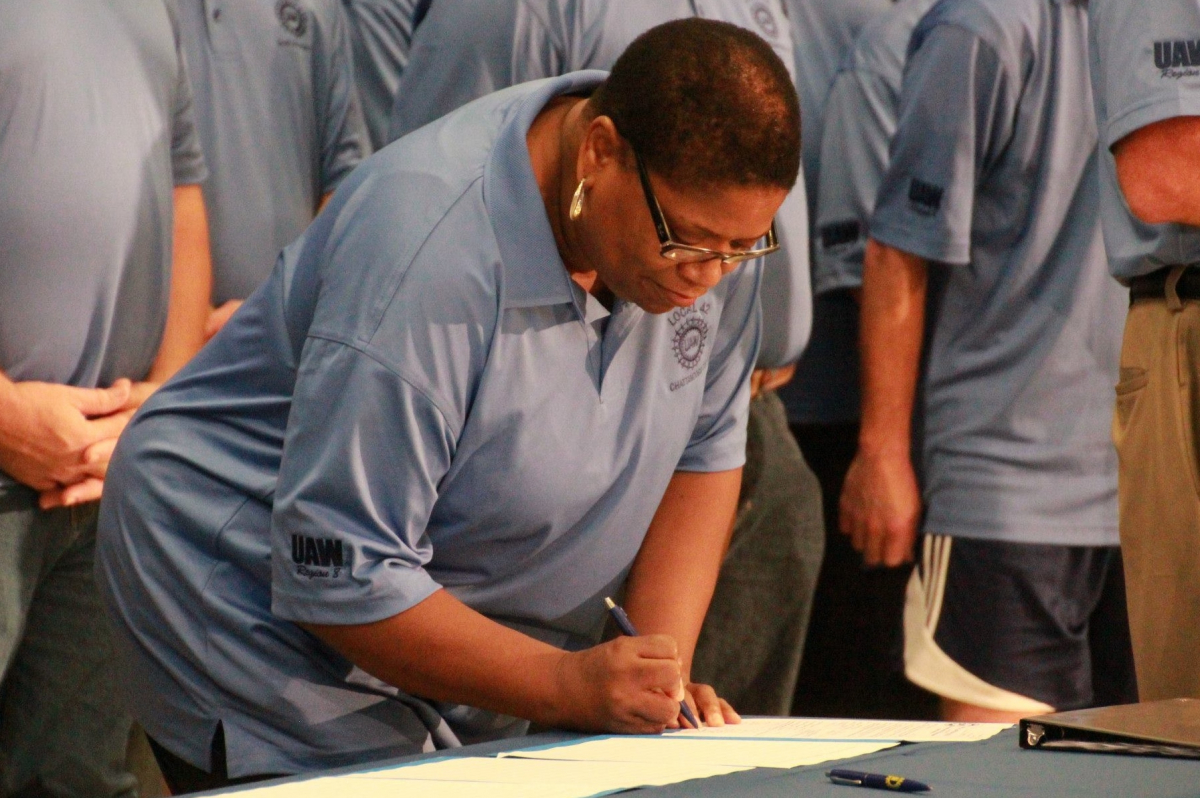 For Volkswagen workers organizing in Tennessee, it’s been a roller coaster of a year. Workers narrowly voted down the union in February, after an onslaught of anti-union pressure. But the latest twist is the chartering of a new United Auto Workers local in Chattanooga. Photo: UAW.

For Volkswagen workers organizing in Tennessee, it’s been a roller coaster of a year. In the latest upbeat twist, the United Auto Workers announced July 10 that it’s forming a local in Chattanooga.

The organizing campaign has been unusual. Though top management tacitly encouraged unionization, workers voted down the union 626 to 712 in February after an onslaught of pressure from union opponents inside and outside the plant.

The brand new Local 42 has already begun signing up and swearing in members who work at the VW plant. Membership is dues-free for now, since there’s no official recognition or contract. But the UAW says it has an informal “consensus” with the company to recognize and deal with the local “as a members’ union that represents those employees who join” when it signs up a “meaningful” share of the workforce.

What does that mean, exactly? UAW statements have been vague, but it seems to be going back to a card-check approach: VW will voluntarily recognize and bargain with the union once it represents a majority.

Works Council in the Wings

In a sense they’ve come full circle. A year ago workers were collecting authorization cards from their co-workers, expecting the company to voluntarily recognize a union once it got a majority. The workers had a good committee, about 100 strong in a workforce of 1,500.

But they ended up going to the ill-fated election after pressure from a national anti-union group that made the usual claims: people hadn’t understood what they were signing, the union had pressured and intimidated people.

Both management and union tout the same goal for the union effort: setting up a works council in the plant. That’s the German system of labor-management cooperation, already used in every big VW plant around the globe—except this one. (Read more on how it works here.)

The UAW and the company even agreed that, if the union won the February election, its collective bargaining agreements forever after would include the works council system. Under U.S. labor law, you can’t have a works council without a union. Pressure from the German union IG Metall has been a big factor in pushing German-owned VW to accept both in Chattanooga.

The works council is still front and center in the UAW’s promotion of its newest local. But none of the workers I spoke with thought it would—or should—happen until after they’d won a union and bargained its terms. Lauren Feinauer, a pro-union activist who does quality troubleshooting in the plant, put it this way: “I like the idea of a works council negotiated by a strong and organized union.”

With no opposition from management, the February vote might have seemed like a shoo-in. But if VW corporate wasn’t fighting the union drive, others picked up the slack. Managers and salaried employees stood outside the plant handing out anti-union flyers. National anti-union groups spent big bucks on billboards and press. Perhaps most damaging were the threats of job losses from Senator Bob Corker and Governor Bill Haslam.

And the UAW had only a narrow majority even before the opposition campaign started in earnest, according to a worker I spoke with who didn’t want to be named. The margin was enough for the expected card check, but not the supermajority it takes to endure the tension and pressure of a contested election.

“I had heard about prejudice against unions in this region, but I was not expecting what I saw,” said Feinauer, who is originally from Michigan. At first she was very direct in talking with people about the union, but “I learned from that I had to be more careful in my approach, I had to try to understand more of why there is that prejudice, that fear,” she said.

Workers narrowly lost the vote, and in April the UAW gave up its Labor Board appeal of the outcome.

Feinauer says the accusations that people had misunderstood last year’s authorization cards were laughable. “I personally was accused,” she said. “It’s just ridiculous. I even turned someone down from signing a card, because they asked if they could sign just to have a vote, but they didn’t know if they wanted a union. I said ‘No, you can’t sign one then.’

“And I’m a female who wears a pink bandanna and carries a little pink purse, so if anyone was intimidated by me…”

But this time workers are being asked to sign a membership card, so it should be plenty clear that signing one means you support the union.

What happens in the meantime? What does “a members’ union that represents those employees who join” look like?

Activists in other plants have proven you can win gains through workplace action, even with only minority membership. Workers who make diesel engines for Cummins in North Carolina, for instance, have a longstanding worker committee affiliated with United Electrical Workers Local 150.

Though they don’t have union recognition or a contract, their latest win is a 75- to 80-cent raise across the board for the plant’s thousand employees. The win came after hundreds signed petitions to top management and wore protest stickers when the CEO visited the plant.

But there’s no talk of that kind of shop floor mobilizing in Local 42. Instead, besides signing up new members, UAW says it will do community service activities and work with the employer to offer job training.

Byron Spencer, a pro-union worker on the door line, said he’s suggested mobilizing in the plant on such issues as retaliation against workers injured on the job. But he’s gotten shot down by UAW organizers.

“I feel these are stories that should be told,” he said. “People might not realize their co-workers are getting injured and getting fired for it. I work on a line with a lot of injury. People get injured and are not reporting it because they’ve seen what’s happened to their co-workers…

“We have things that really need to be addressed. Why not use that as part of strategy?”

When he and others raised these strategy questions after the election, Spencer says, UAW staff organizers smeared them to their co-workers. “They made implications that we had become anti-union, but we had not,” he said.

“It almost feels like the UAW is afraid of any kind of direct action like that, because they’re afraid it will jeopardize whatever they’re working on with management.”

But in his view, “if it hurts the neutrality, that shouldn’t matter, because we have a good ground-up organizing strategy,” he said. “If workers support the union, it shouldn’t matter if the company doesn’t.”

Still, he went down to the union headquarters and joined the new local, and is backing the membership drive. “I see the UAW as the quickest route to having a union that’s recognized as the bargaining agent,” he said simply, “and that’s something we need.”

Wayne Cliett, on the other hand, is fed up. Though he was a pro-union activist throughout the drive, he says organizers smeared him for simply trying to talk to anti-union workers the night the vote results were announced. “After the election results of 626 YES to 712 NO, I realized we needed to gain support from some of those who voted no,” Cliett wrote in a flyer to co-workers.

For this, Cliett wrote, “now I have been demonized for meeting with the enemy.” Days after the news of Local 42’s formation, he handed out his flyer outside the plant, letting co-workers know he no longer supports the UAW effort. But “I still believe solidarity is the answer,” he wrote.

As Feinauer sees it, her most important goal in forming a union at the plant is “to see some kind of consistency in how people are treated.”

Or as another worker put it, in the everyday enforcement of rules, “there’s a profound sense of unfairness at the plant.”

Feinauer describes lower management in Chattanooga—not VW corporate—as the root of these problems. “The company has always spoken about how they want their employees involved in the decision of the direction we go,” she said, “and at the plant level it just has not been happening.”

Will VW live up to workers’ hopes, allying with them against the plant’s petty tyrants? One worker reported a good sign—the company has begun getting rid of some of the most anti-union managers.

But what the company supports, clearly, is the limited version of unionism the UAW has promised. Executives would surely look less kindly on a militant unionism that threatened its bottom line.

Asked whether the minority union might do worksite actions, the anonymous worker I spoke with didn’t think that would be feasible without VW’s permission.

“The majority of [plant] management is anti-union, so it’s been a struggle to even get them to adhere to the National Labor Relations Act. People have been hassled for doing protected activities like signing cards on break,” he explained.

As for petitions or sticker days, “it would be difficult to accomplish any of that inside the plant effectively without VW’s at least tacit approval.”

Reportedly, the UAW has more quietly launched the same “members-only local” approach in its organizing campaign at a Vance, Alabama, plant owned by another German company, Mercedes-Benz. The German union has been backing that drive too, though Mercedes hasn’t been as friendly so far.

There’s no reason to think that Nissan, the villain of UAW’s other big auto plant campaign in Canton, Mississippi, would be friendly to card-check. Few employers in the U.S. would.

One scenario in which you could imagine the works council system spreading in the U.S., though, is if VW expands its reach by buying Fiat Chrysler, as industry press rumors suggest it might.

Just days after the union’s news, VW announced it had finally chosen the Chattanooga plant to build its new SUV, adding 2,000 new jobs this fall. Till now the plant, opened in 2011, has been making only one car, the Passat.

VW and Tennessee public officials had negotiated for months over financial terms. Result: VW will “invest” $600 million in Chattanooga, with $262 million of that coming from taxpayers in “incentives.”

Chattanooga seemed the logical choice all along. But in the tense lead-up to the union election, Senator Corker threatened that if workers voted the union in, the SUV would go to Mexico instead.

Simultaneous with the SUV news, VW announced that Bernd Osterloh, chair of its global works council, would join the board of the company’s American arm. This too was seen as a pro-labor move.

It’s unlikely the close timing of all these announcements was a coincidence. “I think it’s fairly obvious that management tipped off the UAW as to when they would make the announcement about the car, so they could form the members-only local right before,” said Spencer.

“I definitely feel like the management of the company did not appreciate Bob Corker’s threats,” he said. “I don’t think they cared for that.”

NOTE: This article has been slightly revised from its original version, to clarify the points about possibilities for Nissan and Chrysler plants.