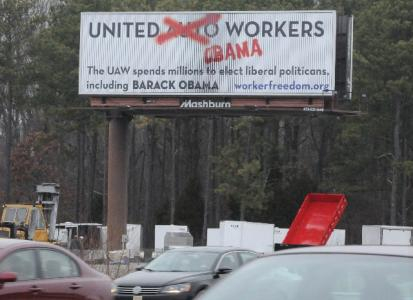 A win for the United Auto Workers at Volkswagen looks likely this week, as 1,550 workers vote on union representation Wednesday through Friday. The UAW had previously gathered a majority of pro-union signatures and management has made its approval clear.

Last week at joint meetings of VW management and UAW leaders with workers, management said, in effect, “We want you to have a works council, the only way to have one is to have a union, and the only union you can vote for is the UAW.” UAW Regional Director Gary Casteel then made a pitch.

But the vote takes place in a tense atmosphere in which Tennessee politicians, major media, and national anti-union groups are all urging a “no” vote. On Monday, State Senator Bo Watson of Chattanooga said a “yes” would lead the senate to turn down any additional subsidies to VW.

The National Right to Work Committee has helped anti-union workers to file charges trying unsuccessfully to block the vote, and the Center for Worker Freedom, a new project of right-wing gadfly Grover Norquist, has erected 13 billboards in the area.

Norquist’s group is going further than simply claiming the UAW will destroy Volkswagen jobs as it supposedly destroyed Detroit. (One billboard shows a picturesquely crumbling Detroit plant that was shuttered 55 years ago.) The website calls attention to what it calls the union’s liberal political stands, such as support for President Obama and for gun control. Obama won 39 percent of Tennessee’s vote in 2012.

“UAW wants your guns,” blares a headline. “As part of a larger strategy to change the political culture of the South, the UAW has already given large sums to politicians who favor strict gun control legislation, including in Tennessee and Alabama.”

Both Norquist and the Wall Street Journal are angry about what they call management help for the UAW. Norquist’s site complains:

"Sources tell the Center for Worker Freedom that United Auto Worker members are roaming at will through the halls of Volkswagen’s Chattanooga plant this afternoon.

"The union troops are reportedly walking up and down the aisles wearing black shirts with the UAW logo emblazoned across them in a clear effort to intimidate the employees.

"The union has reportedly been given safety glasses by the company so that they can fully access the production lines."

Walking around in T-shirts, wearing safety glasses—this is a reign of terror?

Why Is Management On Board?

VW headquarters in Germany has acceded to the UAW because the company’s Global Works Council, with representatives from factories around the world, has said U.S. workers should have a plant-level works council. At present the Tennessee factory is the only major VW plant without one.

Under German law, which requires works councils in many enterprises, a council’s explicit charge is to work for the interests of both workers and company, finding non-conflictual ways of dealing with new technologies, reorganization of jobs, and plant closings. Works council members are elected by non-management employees and paid by management. (See box.)

But that job description goes against U.S. labor law, which says management may not “dominate” a labor organization nor “contribute financial or other support to it.” A works council would be legally possible under U.S. law only if the workers involved also had their own independent representative: a union.

Ironically, the UAW’s organizing tactics at VW call that independence into question, politically if not legally. The union has repeatedly stressed that its goal is a stronger company, with resulting job security. President Bob King says he wants “innovative labor-management relations that benefits the company, the entire workforce, shareholders and the community.”

He consistently maintains that the union’s combative past is behind it and now says the cooperative “works council model is in line with the UAW’s successful partnerships with the domestic automakers and its vision of the 21st century union.” Those partnerships led the UAW to become an early adopter of the two-tier wage model, at the Big Three in 2007, and to give up pensions for new hires in that contract.

Pro-UAW workers at VW have said they want a works council in order to press the company to build a new SUV at their plant. They say that “voice” will aid them.

But any works council in Tennessee will be “lite”—it will not have the legal rights of works councils in Germany, where management is required to bargain with councils on some issues (not including wages, which, there and in the U.S., are the union’s purview). Any works council structure VW management comes up with will be purely voluntary.

Around the world, workers’ representation within VW’s local works councils varies widely, from the big national metalworkers union IG Metall in Germany to the state-controlled union in China.

As to the SUV, VW says it will sell a mid-size SUV in the U.S. within two years, but won’t say whether it will be built in the Tennessee plant or in its Mexican facility—which also has a works council. With a voice.

Related
Volvo Workers in Virginia Vote Down Bad Contract by 90 Percent—Again »
Inside the Alabama Amazon Union Drive: An Interview with the Lead Organizer »
Draw the Line in Permanent Marker: Three Organizing Principles »
Don't Guess What's on Your Co-Workers' Minds: Allow Yourself to Be Surprised »
Opening the Door to a More Democratic UAW »