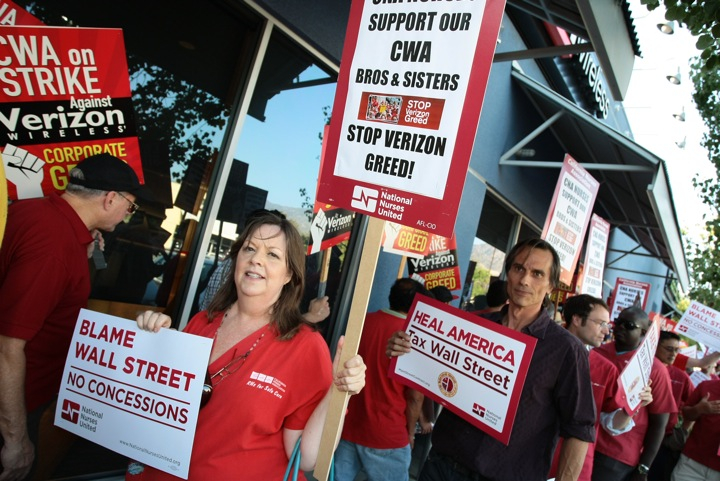 Strike supporters like these in Long Beach, California, were asked to call off the pickets while the unions plan the next phase of their strategy. Photo: Slobodan Dimitrov.

The striking unions at Verizon made it clear from the beginning that they might return to work without a settlement if they were convinced management would get serious at the bargaining table.

But the 45,000 union members returning to work on Tuesday after a two-week strike would do well to remember the words of Verizon’s Marc Reed when picket lines were taken down Saturday. Said Reed: “We remain committed to our objectives.”

The company’s vice president for human resources wasn’t just referring to Verizon’s onerous giveback demands—which will still be on the table, even if winnowed down, when bargaining with the Communications Workers (CWA) and Electrical Workers (IBEW) resumes next weekend.

Reed is a major architect of Verizon’s long-term de-unionization strategy that has already achieved the “objective” of cutting union density in half—to only 30 percent within the company.

In a fashion that created confusion and some consternation over the weekend, CWA and IBEW told their growing network of labor and community supporters to end public protests directed at Verizon Wireless (VZW), where Reed was long a top executive.

Many local groups had already “adopted” a local VZW retail store for their continuing attention. The back-to-work agreement negotiated with Verizon only suspends striker picketing at these locations, but the message immediately conveyed to Jobs with Justice chapters and other union members was that “support activities should now end,” as UNITE HERE President John Wilhelm put it in a “stand down” message sent to hundreds of activists Saturday night.

From Washington, JWJ national director Sarita Gupta announced that “all leafleting at stores, work sites, and other events” must “cease,” when in fact such activity is not barred by the back-to-work agreement.

At least one longtime Jobs with Justice local leader has already offered, in contrast, “to keep fighting until [IBEW-CWA] have a signed contract.” He pointed out that Verizon union supporters “have the public’s attention so we could continue with Workers Rights Board letters, store leafleting, etc.” to make sure that the unfinished VZ contract struggle doesn’t disappear from everyone's radar screen.

In addition, if each already involved local union, inside or outside of CWA and IBEW, plus their allies in Jobs with Justice, proceeded with their local adoption of VZW retail and call center locations around the country, they might be able to build ongoing relationships of solidarity with the non-union workers inside. Over time, this networking and contact making could lead to building committees inside and a revived fight for bargaining rights at VZW, a longstanding union goal.

The continuing failure to unionize more than 80,000 workers at VZW and other non-union subsidiaries is the Achilles heel of organized labor at Verizon. The givebacks management still wants to extract from IBEW-CWA, in talks that resume next Sunday, mirror the conditions unilaterally imposed on the non-union majority of Verizon employees.

Those non-union “associates” have “merit” pay, costly medical benefits, and no pensions, job rights, or grievance procedure. For Marc Reed and new Verizon CEO Lowell McAdam, that’s exactly the kind of employment conditions that union-represented employees, retirees, and new hires should have in some form, as well—along with weakened unions that operate only on the company’s wireline side.

In a CWA phone briefing yesterday, strikers were told that their picketing at 1,000 VZW stores had generated a flurry of calls from non-union workers wanting to organize. (According to the company’s numerous injunction requests, protests at the retail stores also sharply reduced sales at a number of stores.)

The wireless worker response was an encouraging sign. In past strikes, like the four-month walkout at Verizon’s predecessor NYNEX in 1989, the picket-line hassles endured by 2,500 non-union customer service reps in New England made subsequent recruitment overtures to them more difficult. In fact, it took another five to ten years for these call center workers, serving landline customers, to be recruited by CWA and IBEW, even with the help of negotiated neutrality, an uncontested National Labor Relations Board (NLRB) election, and/or a card check process—all favorable conditions missing on Verizon’s wireless side today.

Unlike the last work stoppage 11 years ago, this month’s walk-out was not framed, in part, as a defense of VZW workers’ rights. Although mentioned in the unions’ pre-strike mobilization materials, the need to “Tear Down the Wall” between IBEW-CWA bargaining units and the company’s “Wal-Mart” side was not stressed as a theme, as it was in the 2007-08 Verizon contract campaign. As part of that effort, CWA and IBEW did win joint recognition three years ago for 600 technicians employed by Verizon Business, another non-union subsidiary.

In 2000, CWA and IBEW made organizing the unorganized a key part of their strategy at Verizon, waging a two-week strike against concessions and for organizing rights. Their aim was a deal that would have enabled both unions to grow on the wireless side of the company.

The contract campaign in 2000 highlighted Verizon’s record of union-busting when workers tried to organize in wireless call centers and retail stores like the ones widely picketed during the last two weeks. Beginning in the mid-1990s, top Verizon officials had made it clear that collective bargaining would have no place in their share of America’s fast-growing and hugely profitable wireless market. VZW now has 90 million subscribers. Its chief rival is AT&T Mobility, the only fully unionized firm in wireless.

In the corporate mergers and restructuring that led to the creation of Verizon a decade ago, two IBEW wireless bargaining units in Boston were destroyed. In New York City, a 75-member CWA cell site technician unit, originally organized in 1989, managed to survive this concerted assault, but remains the only unionized portion of a VZW workforce that now numbers about 80,000.

In 2000, after much intensive membership education about the implications of “the wall” Verizon was erecting between its landline and wireless operations, CWA and IBEW struck not just to defend the pensions, health benefits, and job security of existing members. They also tried to win contract language that would restrain Verizon’s aggressive and often illegal interference with wireless worker organizing.

During preparations for the 2000 strike, I helped a group of VZW workers build a CWA organizing committee at a 400-worker customer service center in Woburn, Massachusetts. Workers faced illegal threats, harassment, and surveillance of their activities, as later confirmed by the NLRB, which issued an unfair labor practice complaint against the company, one of many over the years.

The August 2000 strike by 75,000 CWA and IBEW members was settled with what we thought at the time was a great union breakthrough: card-check recognition and management neutrality in any future organizing at VZW locations from Maine to Virginia. As Marc Reed explained the four-year deal: “Our agreement simply provides an expedited procedure for employers to make an informed choice”—between unionizing and staying non-union.

Verizon quickly reneged on this written commitment, in ways that thwarted employee free choice at every turn and ever since. Follow-up negotiations on appropriate bargaining units for VZW retail store employees in the 12-state region quickly bogged down in a morass of arbitration proceedings that made NLRB elections look “expedited” in comparison.

Meanwhile, the Woburn call center and two others in New York and New Jersey, where CWA also had active committees, were all shut down. The work handled by these 1,500 workers was shifted to North and South Carolina, both right-to-work states and safely outside the geographical scope of the unions’ organizing rights agreement.

Verizon’s retaliation sent a powerful message to other VZW workers around the country: union activity leads to lost jobs. Not a single VZW worker was ever organized using the recognition procedure negotiated in 2000.

Verizon’s bad-faith bargaining about card check and neutrality was followed by fitful CWA attempts, over the next few years, to punish the company for its misbehavior. This “leverage campaign” tried to brand VZW as an industry rogue and get labor-friendly customers to switch to more union-friendly Cingular, now known as AT&T Mobility. To its credit, AT&T has not interfered with wireless worker organizing during the last decade. Using a negotiated procedure similar to the one VZW flouted, about 40,000 AT&T Mobility workers have been able to win contracts in call centers, retail stores, and technical units across the country.

In the rest of wireless, VZW is not alone in its anti-unionism. Other major players include T-Mobile, which has 20,000 workers, all of them non-union except for 15 technicians in Connecticut who just won a narrow NLRB election victory.

Another longtime union-buster in the field is Sprint. Sprint uses a media-savvy reseller called Credo to dupe well-meaning progressives into signing up for its cellular service by promising to share a small portion of its profits with good causes. Credo’s ads claim that AT&T and Verizon are “socially irresponsible” and Credo is not. Non-union Credo’s hypocrisy about worker rights reached new heights last week when it sent out an email blast about “bad corporate actors [Verizon] squeezing money out of their own employees.”

(For more on the Credo scam, which is a great source of ad revenue for left/liberal publications, go here.)

This confusing muddle of consumer choices makes “union label” marketing of AT&T quite challenging, particularly since East Coast customers have long associated Verizon with high-profile strikes and bargaining, leading many to assume that VZW is unionized as well. Even other labor organizations—like SEIU’s huge East Coast affiliate, 1199/United Healthcare Workers East— failed to switch carriers, sticking with VZW out of ignorance or indifference. Individual customers faced penalties for extricating themselves from their plans ahead of expiration.

One Bay Area strike sympathizer who got a union leaflet this month with the message “Don’t Shop @ Verizon Wireless!” quickly discovered that it would cost her $620 to cancel her account with VZW and take her business to AT&T.

In the recent community-labor outreach at VZW stores—hopefully only temporarily suspended—switching to AT&T was even not even mentioned in such leaflets, despite many years of CWA investment in that strategy.

As CWA and IBEW enter the uncharted waters of what could still be an intermittent strike (that is, going back out if bargaining breaks down again), continued mobilization on the job and in the community is essential to keep maximum pressure on Verizon.

The creative, militant, and even Facebook-assisted strike activity since August 6 need to be translated into “inside strategies” that make the company pay a continued price for its giveback demands and foot-dragging in negotiations.

Both rank-and-file activists and their community-labor supporters will have more success organizing the unorganized within Verizon if they tackle this longer-term project together, with no let-up, until the job gets done.

Steve Early was involved in CWA-IBEW telephone worker organizing, bargaining, contract campaigns, and strikes in New England from 1980 to 2007. For more background on “bargaining to organize” in telecom, see The Civil Wars in U.S. Labor.