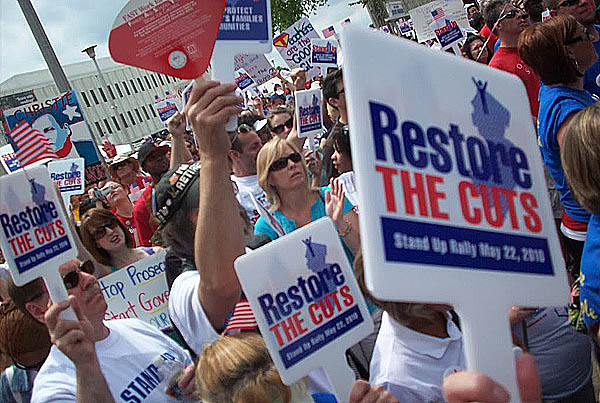 The stock market may be climbing, but city and state budgets across the country are stuck in a downward spiral.

From California to Maine, double-digit deficits have left civil servants with a giant bull’s-eye on their backs, as politicians across the spectrum have pushed furloughs, layoffs, wage cuts, and farther-reaching measures like pension modifications as the main way to close yawning budget gaps.

At the same time politicians have shunned the other side of the equation—raising taxes on corporations and the wealthy. Where new taxes or fees are on the table, they are the regressive type that shift more of the burden onto working people, such as New York’s ill-fated soda tax. The deep tax breaks handed out to business and the rich over the last 30 years (see page 11) don’t seem to be up for discussion, and most public worker unions are stuck supporting these half-hearted revenue-raisers that leave the public feeling nickeled and dimed by the government.

Most state and local governments are legally required to balance their budgets every year. But since the start of the recession 48 states have faced budget shortfalls, for a cumulative total of $375 billion. Last year’s stimulus package postponed much of the initial damage, but now federal aid is drying up.

Not content with saving money immediately by laying public employees off or furloughing them, politicians are using today’s budget crises as a chance to roll back longstanding benefits.

• Pensions are the big target. Nearly 80 percent of civil servants have traditional defined-benefit pensions, compared with a third of private sector workers.

Several states are working to change that. Michigan and Utah recently instituted 401(k)-style pensions for new hires, and Nebraska and Alaska have mandated similar plans.

More than a dozen other states have made changes to their traditional pension plans, including new or higher contribution requirements, raising the retirement age, stretching out the period before vesting, changing the formula used to calculate the final average salary, and lowering credits for years of service.

• Retiree health care is another benefit on the chopping block, with at least a half dozen states limiting future increases for current retirees and another handful eliminating benefits for future hires.

• With almost half of all public workers concentrated in education, elected officials across the political spectrum have been busy taking on teachers. The Obama administration’s “Race to the Top” incentives have fueled efforts by several states to abolish “just cause” dismissal provisions for teachers (commonly referred to as teacher tenure). New legislation in Colorado ties job security to student test scores. Several states have lengthened the period required to qualify for tenure, and a host of other modifications—such as streamlining dismissal procedures—are working their way through state legislatures across the country.

• Government workers are losing jobs not just to layoffs but to a new wave of privatization and outsourcing. The extreme end of the spectrum is Maywood, California, which recently outsourced all of its services, including its police force, in an effort to save money, betting on the fact that contractors will do them more cheaply. Because of steep cuts in the procurement department in Colorado Springs, Colorado—where eight of its nine staff were booted due to budget woes—the city was forced to outsource its outsourcing.

• Managers are also targeting job protections like seniority and work rules. New York is attempting to stop paying city bus drivers during their wait times between morning and evening rush-hour runs, and make it easier to shuffle routes during slower mid-day stretches. In Portland, Oregon, city officials are trying to limit overtime so that it’s paid only after 40 hours of work, rather than after eight hours in a day. Workers in Chicago’s McCormick Place convention center will see the size of their crews trimmed and will no longer be paid overtime for early morning or late-night shifts.

Take New Jersey, where Governor Chris Christie responded to the state’s $11 billion deficit—the third-largest in the country—with $9 billion in cuts July 1. Christie proudly vetoed a “millionaire’s tax” that Democratic legislators walked to his desk. In addition to refusing any tax hikes, Christie is pushing to privatize several state agencies as part of a crusade to “get the government the hell out of your pocket.”

“We have a governor who vows to give people earning over $1 million a year a tax break. Is that shared sacrifice?” asked Barbara Keshishian, New Jersey Education Association president, at a spring protest of 35,000 public employees in Trenton.

CHOP FROM THE BOTTOM

New Jersey’s chop-from-the-bottom strategy includes a law capping property tax increases at 2 percent, in addition to slowing state aid to cities and slashing social programs. A property tax cap passed in California in 1978 has created a structural revenue shortage in the state ever since.

Christie’s plan has not proceeded without resistance. The May march on Trenton came after an unprecedented walkout of high school students throughout the state to oppose Christie’s plan to cut education spending. Still, the new budget slashes $820 million, 7 percent of the state’s education budget.

Under threat of a shutdown of basic services at the budget deadline, the Democratic-controlled legislature voted up the smallest budget in years. A 5 percent reduction in spending across the board also includes defaulting on the state’s $3 billion payment owed to state worker pensions.

Still, mobilization by a public sector coalition including AFSCME, teachers (AFT and NEA), and the Communications Workers (CWA) kept Christie’s threat to lay off 1,300 workers at bay.

CWA, which represents 40,000 New Jersey state workers, is no stranger to mobilization. Workers hounded former Governor Jon Corzine for weeks last year, setting up pickets outside his public events after he attempted to solve last year’s budget gap with three weeks of furloughs—equal to a 5 percent pay cut for most state workers.

Eventually, CWA forced Corzine to back down and agree to reduced furloughs and no layoffs in exchange for deferring raises.

Are taxes too high? That all depends on where you sit on the income ladder. When it comes to the state and local taxes that pay for basic services, working people pay nearly twice as big a proportion of their income as the wealthy do.

Nationally, the bottom fifth of earners—making an average of $10,700 a year—pay 11 percent of their income in state and local taxes. By contrast, those in the top 1 percent—with incomes from all sources averaging $1.8 million—pay less than half that, 5.2 percent.

This upside-down tax system is the result of states' heavy reliance on sales taxes and property taxes, which hit working people much harder than the rich. Personal income is taxed at a much lower rate by states than by the federal government, and nine states don't collect personal income tax at all. Seven states—including Colorado, Illinois, Michigan, Massachusetts, and Pennsylvania—have a "flat tax," where everyone pays the same rate, rather than a "progressive" tax where higher income brackets pay a higher
percentage.

What about big corporations? State and local governments get less than 5 percent of their tax revenue from corporate taxes. At the federal level, corporate taxes have declined tremendously in the past two generations. Whereas corporations used to pay a third of all federal taxes collected, today they are paying 10 percent, thanks to expanded loopholes, a steady stream of business tax cuts, and rampant tax avoidance.

California is facing a deficit even worse than New Jersey’s, and Governor Arnold Schwarzenegger is tackling his final budget with the slash-and-burn approach that has defined his tenure. He’s vowing to restructure the state’s pension system, and wants state workers to be paid only the minimum wage until the legislature passes a budget.

Schwarzenegger is opposing any revenue measures floated by Democrats, including a tax on oil companies that drill in the state.

California’s wealthier locales are feeling the squeeze. San Francisco Mayor Gavin Newsom announced a record $483 million deficit June 1 and privatization, service cuts, and 1,600 layoffs to solve it—while tip-toeing around taxes. Layoffs would save $64 million but reduce the city’s workforce to the lowest level in 12 years.

Though he promised to fully fund the city’s universal health care system, Newsom’s cuts would result in clinic closings. Health services provided by the city, including those in jails, would be privatized.
A labor coalition that includes recently elected reformers in the SEIU “megalocal” 1021 is pushing a revenue campaign. With the central labor council, UNITE HERE, and others, Local 1021 is gathering 20,000 signatures for a ballot measure to close a tax loophole that’s kept giant hotels from paying about $70 million a year. The measure would also have hotel guests paying $3 a night more for four years.

As governors and mayors whittle away at pensions, public services, and the workers who provide them, public sector unions face a clash of world views with the likes of New Jersey’s Christie.

“Should there be one specialized sector of our society that is sheltered from the recession?” he asked at this summer’s National Governors Association meeting, exhorting public workers to join their private sector brethren in the economy’s precarious cold.

“When times are tough it takes a lot for people to understand that the only way to make it better is to pull together, not tear each other apart,” said Lisa Kermish, vice president of the University of California’s Professional and Technical Employees. “Unfortunately, there’s a lot of encouragement to be at each other’s throats.”

Businesses are into a phase of creative disassembly where reinvention and adjustments are constant. Hundreds of thousands of jobs are being shed by Lockheed Martin, Chevron, Sam’s Club, Wells Fargo Bank, HP, Starbucks etc. and the state, counties and cities. Even solid world class institutions like the University of California Berkeley under the leadership of Chancellor Birgeneau & Provost Breslauer are firing employees, staff, faculty and part-time lecturers through “Operational Excellence (OE) initiative”: last year 600 were fired, this year 300. Yet many employees, professionals and faculty cling to old assumptions about one of the most critical relationship of all: the implied, unwritten contract between employer and employee.
Until recently, loyalty was the cornerstone of that relationship. Employers promised work security and a steady progress up the hierarchy in return for employees fitting in, accepting lower wages, performing in prescribed ways and sticking around. Longevity was a sign of employer-employee relations; turnover was a sign of dysfunction. None of these assumptions apply today. Organizations can no longer guarantee work and careers, even if they want to. Senior managements paralyzed themselves with an attachment to “success brings success’ rather than “success brings failure’ and are now forced to break the implied contract with their employees – a contract nurtured by management that the future can be controlled.
Jettisoned employees are finding that their hard won knowledge, skills and capabilities earned while being loyal are no longer valuable in the employment market place.
What kind of a contract can employers and employees make with each other?
The central idea is both simple and powerful: the job or position is a shared situation. Employers and employees face market and financial conditions together, and the longevity of the partnership depends on how well the for-profit or not-for-profit continues to meet the needs of customers and constituencies. Neither employer nor employee has a future obligation to the other. Organizations train people. Employees develop the kind of security they really need – skills, knowledge and capabilities that enhance future employability. The partnership can be dissolved without either party considering the other a traitor.
Let there be light! Speak your mind 916 651 4007 925 942 6082

I Agree with you.
i am working on project which one related to this topic.
and you help me.
thank you.
keep it up!!