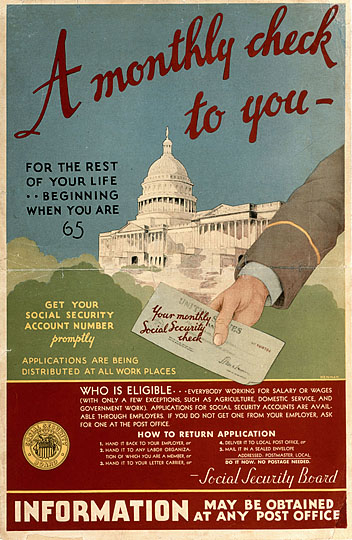 The Social Security Act of 1935 promised “a monthly check to you for the rest of your life...beginning when you are 65.” Now politicians want to raise the retirement age to 70. Poster: The Art Archive/Alamy

When President Obama named his Commission on Fiscal Responsibility and Reform this spring, he chose 18 wealthy members for whom Social Security will make up only a tiny fraction of their retirement income. The commission is charged with reporting back December 1 with recommendations on how to decrease the ballooning federal budget deficit.

The commission’s chairs and many of its other members seem to have been chosen for their hostility to Social Security. Co-chair and retired Senator Alan Simpson, a Wyoming Republican, told CNBC, “A lot of blood, hair, and eyeballs have to lay on the floor before we finish.”

Erskine Bowles, who was President Clinton’s chief of staff, warned that America will become “a second-rate power…in my lifetime” if we don’t “mess with Medicare, Medicaid, and Social Security.”

The commission is meeting behind closed doors. Its proposals will be voted on after the November elections by a lame-duck Congress, on a fast-track basis—no hearings, no amendments.

The commissioners’ proposals will affect every American—except people like themselves who don’t need Social Security. That’s why so many groups are up in arms to stop Congress from getting set up by the commission.

Now is the time to tell your representatives whether you want your benefits cut. See Alliance for Retired Americans for a list of events in August and early September.