Friedrichs Reprieve, But We're Not Out of the Woods Yet 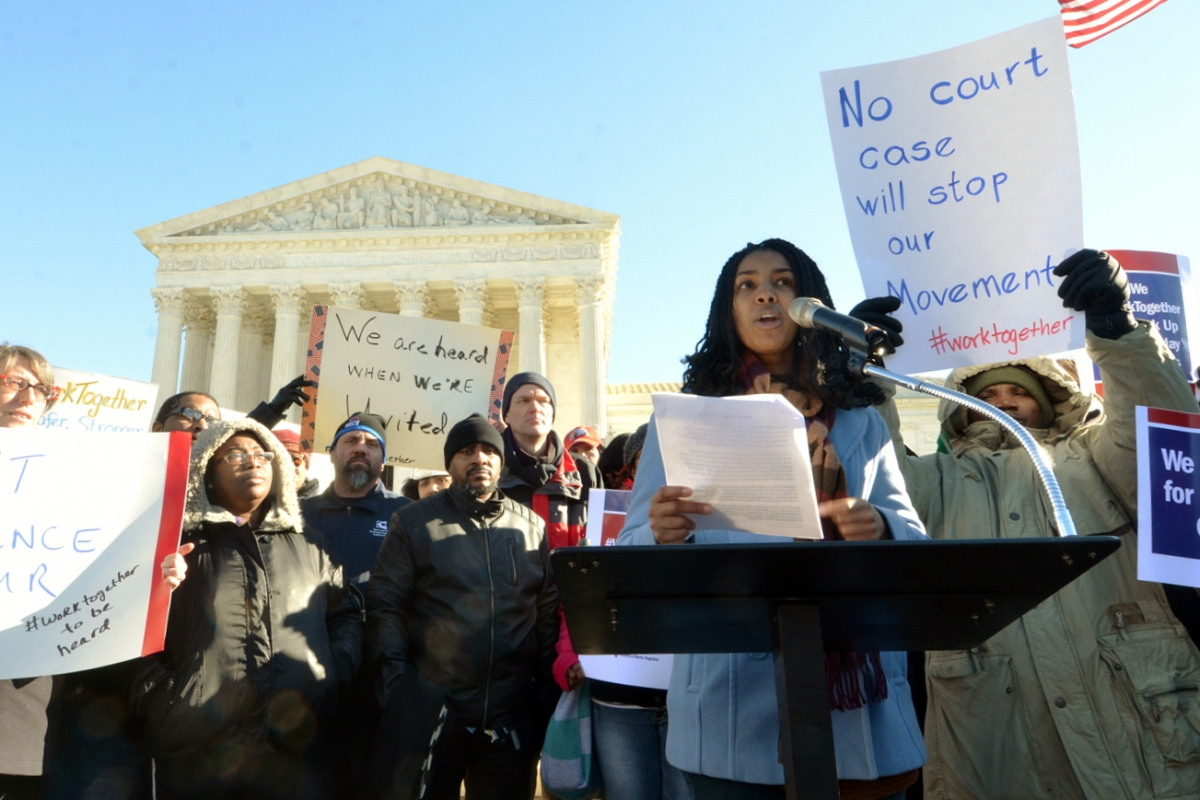 Members of the National Education Association rallied as the Supreme Court heard the Friedrichs case. Labor has dodged a bullet, for now—but returning to business as usual would be a mistake. Photo: NEA, Patrick G. Ryan.

Yes, we dodged a bullet—for now. But any union that takes the Supreme Court shakeup as a cue to go back to business as usual will be making a big mistake.

The decision, expected by June, could have imposed so-called “right to work” on the whole public sector—meaning unions could no longer collect “fair-share” fees from the nonmembers they’re legally required to represent.

Now the court looks deadlocked, which could mean the lower court’s ruling in favor of the union is upheld; more likely, Friedrichs will be reargued after a ninth justice is confirmed.

There’s no question—this reprieve is good news. Losing fair share would be a serious blow.

The evidence is in, from state after state that’s gone “right to work.” Even for a union that’s well-prepared, the loss saps a portion of members, budget, staff time, and strength. For the unprepared, membership goes into freefall. That’s why anti-union forces keep pushing these laws.

So it’s no wonder unionists are breathing a sigh of relief. But we’re not out of the woods yet.

Friedrichs will be back. If this case is dead in the water, the same conservative billionaires who bankrolled it will bring another. Scalia’s replacement could prove unfriendly. A liberal justice could exit the court. Congress could do what the court hasn’t.

And even if a genie let us wish away these anti-union legal crusades forever, that wouldn’t solve labor’s deeper problems.

That’s why the Friedrichs wake-up call had a silver lining. Unions, especially in the public sector, were starting to ask the uncomfortable question—why do so many workers jump ship when they get the chance?

A hard look in the mirror reveals the deep disconnect between most members and their unions. That’s the underlying problem labor must solve if we hope to tackle the enormous challenges of our day—among them spiraling privatization, evaporating pensions, proliferating two-tier wages, a poisoned planet, and record extremes of wealth and poverty.

A union’s strength, after all, is its members—not just how many are paying dues, but how many have caught the spirit of solidarity, how many will stand together on the job, how many are training their co-workers to see through the boss’s agenda, how many will go to the mat for the union because it’s their organization, fighting for what matters to them.

That kind of commitment can’t be ginned up from headquarters, or turned on and off like a faucet. Too often a handful of top officers set the agenda—in bargaining, in politics, and on the shop floor—and members view the union as an insurance policy, at best.

Membership has to mean more than reading a newsletter or voting on a contract minutes after hearing the highlights. But how many members have a real opportunity to do more?

The democracy deficit doesn’t make “right to work” fair—or dodging dues acceptable—but it does help explain why so many members feel disengaged. It’s also a huge waste of our movement’s potential.

With legal landmines looming, some unions started scrambling to change course, a process that can be messy and slow. One staffer quipped that shifting the culture of a big local is like changing course aboard a giant cruise ship.

We lucked out and missed the iceberg. But now is no time to turn back to racquetball and Mai Tais.

Turning the ship around goes deeper than hitting workers with a sales pitch or a guilt trip. Thankfully, we’ve got a little more breathing room to do it right.

What’s required is no mystery. Unionists have known the fundamentals of good organizing for a century or more: listen more than you talk; find on-the-job problems your co-workers care about; take action to solve them; map out natural leaders and groups; act together instead of alone.

Our new book Secrets of a Successful Organizer, coming in April, lays out how any rank and filer can get the ball rolling in her own workplace. It’s simple—just not easy.

A version of this article appeared in Labor Notes #434. Don't miss an issue, subscribe today.

Alexandra Bradbury is the editor of Labor Notes.al@labornotes.org
Related
Every Boss Has a Weak Spot. Find and Use It. »
Richmond Educators Are First In Virginia to Win Bargaining Rights »
Steward's Corner: How to Think Like an Organizer »
Steward's Corner: Recruiting and Keeping Volunteers »
How We Turned Bargaining Around at Law360 »

Currently there is language within the NLRA that allows for partial bargaining units, even though they are HIGHLY unpopular with unions and management. Much more common within the language of the agreements is a clause that makes it such that the union is the only bargaining agreement at the table...

Therefore, this creates a one union "shop" that the management gets to deal with. If they strip that language from the agreement, suddenly things get interesting. Now unions are no longer required to cover those that refuse to pay union dues... Of course, this hasn't happened in MANY years, and I doubt our NLRB is ready to bring up such a contentious and crazy issue.

Multiple bargaining units within a workplace creates a VERY hostile working environment. It's kind of our Nuclear Option if things really get bad.