Immigration Reform May Come with Big Gifts to Employers 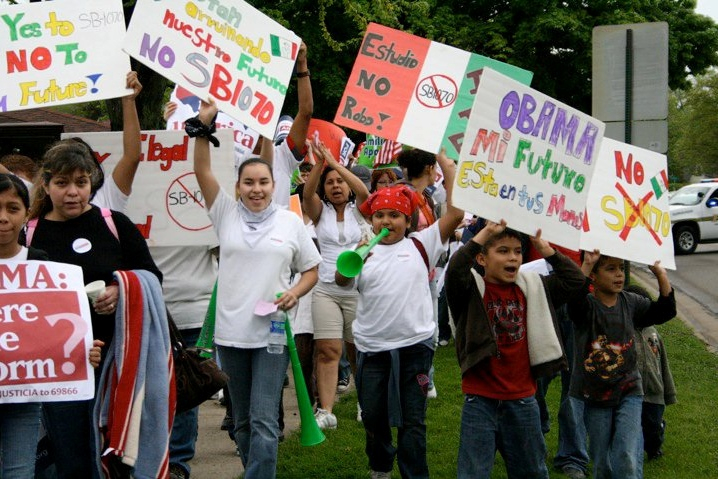 Immigration reform could get 11 million undocumented workers on the path to citizenship, but watch out for poison pills that compromise workers’ rights. Photo: Promise Arizona.

Unionists and immigrant rights activists are at once excited and apprehensive about the immigration law overhaul proposed by the Obama administration.

A path to citizenship, though it will be arduous, could give some of the nation’s 11 million undocumented workers a chance to get their papers and become full participants in work and civic life.

This could be a breakthrough for unions: every worker who becomes documented is a worker whose boss can no longer threaten to have her deported if she stands up for her rights on the job.

But, as a pro-business trade-off, the law may also come with an expanded “guestworker” component. Historically, defenders of worker rights, including unions, have objected to guestworker programs, calling them “modern-day indentured servitude.”

Guestworkers are tied to their employers on pain of deportation—making it hard for them to protest mistreatment or low pay, causing employers to hire them instead of U.S. residents.

“One fundamental starting point for any immigration reform is that deportation of the undocumented has to end immediately,” said Saket Soni, executive director of the National Guestworker Alliance. “You can’t deport today the citizens of tomorrow.”

But Obama’s administration has deported more people than Bush’s, and many immigrant rights activists have spent the past four years protesting these deportations.

The new law is also certain to step up border security enforcement. And the package includes stricter electronic verification of job applicants’ legal status, which could lead to heightened profiling and intimidation for immigrants, both documented and undocumented.

Even the proposed path to citizenship—the carrot alongside all these sticks—requires payment of fines and back taxes and proof of long-term employment, all of which could be difficult or impossible for a large portion of undocumented immigrants.

They must start at “the back of the line” behind other immigrants applying for citizenship. In 2010 alone more than 700,000 people applied for naturalization, according to the Department of Homeland Security.

After years of harsh anti-immigrant rhetoric, some Republican lawmakers are open to some kind of immigration reform, as a way to gain a foothold in the growing Latino electorate that overwhelmingly voted for Obama last fall. But they will seek to give it a pro-business cast—as do some of the administration’s proposals.

The number of Latinos in unions actually grew in 2012. To re-activate the many who worked to elect Obama in 2012, unions in the AFL-CIO and Change to Win are holding rallies in 14 cities across the U.S. in February and March, beginning in Raleigh, North Carolina, and Las Vegas.

The two labor federations reiterated their 2009 joint framework on what needs to be included in immigration reform. It includes a path to citizenship for the undocumented, a de-politicized plan for future immigration flows, a rational border control system, a secure and effective system to verify workers’ status, and improvement, not expansion, of current guestworker programs.

But what are the devilish details? Representatives of both coalitions, including the AFL-CIO’s Rich Trumka and the Service Employees’ Eliseo Medina, are speaking to the media alongside representatives of the Chamber of Commerce, to show common ground between business and unions.

Although advocates don’t want to go on the record, some fear that labor’s willingness to collaborate with business interests could weaken its position. By analogy, at the end of the health care reform debate in 2010, union leaders were willing to back just about any bill the administration proposed, even when some provisions would hurt union members.

So despite labor’s stance against expanding guestworker programs, Trumka and Medina may end up backing expansion in hopes of citizenship for some current immigrants. Already they are speaking of flexibility, based on U.S. employment levels and other “data-driven” factors, to decide the number of foreign workers to be allowed into the U.S. in the future.

Guestworker programs allow employers to bring in foreign workers on temporary visas. Current law allows an unlimited number of agricultural workers for up to 10 months at a time; in 2011 there were are about 80,000 agricultural guestworkers in the U.S., according to the Department of Labor—a small proportion of all farm workers.

A second program brings in workers for industries such as landscaping, forestry, seafood processing, and hospitality. The 2012 cap on these workers was 66,000. Highly skilled workers such as engineers enter under a separate program.

Some employers want flexibility to expand the type and number of guestworkers they can import. The American Health Care Association, for instance, wants to import nurses, nurse assistants, and LPNs to work in nursing homes.

The Laborers say one in five workers in construction now is an immigrant. The union’s immigration coordinator, Yanira Merino, said for years employers have misused guestworker programs, hiring workers for jobs in other industries and then moving them into construction work as a way to cheat the system.

The law requires employers who recruit guestworkers to first demonstrate that there aren’t enough U.S. workers able to do the job—but enforcement is weak. The union doesn’t want to “open up a situation where employers will be able to bring in workers with not much of an effort, and that will undermine standards in our industry,” Merino said.

Despite concerns about some provisions, the union doesn’t want to be labeled a spoiler of historic immigration reform. “We don’t think a ‘no’ position is a constructive one,” Merino said. “But we will speak out if we think it will hurt workers.”

Josh Stehlik, a workers’ rights attorney at the National Immigration Law Center, was encouraged that the president spoke about the need for workplace protections as part of immigration reform. But the employment verification system raised a red flag, he said.

NILC has opposed mandatory status-verification systems because immigrant workers—even those with legal status—are vulnerable to the error-ridden databases used.

NILC and the Guestworker Alliance want any new law to include the protections contained in the POWER Act, which was introduced in 2011 but garnered little support in Congress. Undocumented workers who report workplace law violations, including wage theft, would be granted temporary visas, to protect them from retaliation.

Saket Soni of the Alliance said any reform will be tainted if workers’ rights aren’t explicit. “No matter what the size [of the program], the labor rights of guestworkers and their right to access basic civil rights and organize collectively have to be protected,” Soni said.

The Alliance is part of the United Workers Congress, a coalition representing workers excluded from labor law protections, such as domestic and farm workers. They gathered in Washington in February to pressure Congress for their own immigration platform—which is strikingly different from Obama’s.

Their proposals include social safety net protections for immigrants during the legalization process; an end to collaboration between police and immigration enforcement; minimization of fines and high fees; no mandatory expansion of E-Verify, “the error-ridden electronic verification system which has repeatedly been used to destroy union organizing campaigns”; a “labor law enforcement fund” for industries with large numbers of immigrants; and partnering with worker organizations to help implement legalization.

Adrienne Der Vartanian of the advocacy group Farmworker Justice said that, to avoid the abuses guestworker programs have allowed in the past, they must allow workers portability—so they’re not tied to one employer—among other protections.

More broadly, she says, all farm workers, including guestworkers, should be eligible for the path to citizenship.

One union has organized guestworkers, and Baldemar Velasquez, president of the Farm Labor Organizing Committee (FLOC), thinks it’s not realistic to keep them out. “I would venture to say guestworkers would be a necessity in agriculture,” Velasquez said.

Temporary workers from countries like Mexico, he said, are the only group willing to take such short-term, low-paying jobs as bringing in the crops during the short northern harvest seasons.

It’s not a bad thing to allow workers from other countries to make money to bring home to their families, Velasquez said. But “if you are going to have a guestworker program, give them their right to organize.”

FLOC’s contract, covering 8,000 seasonal guestworkers at cucumber and other farms in North Carolina, includes a grievance procedure and seniority. It took years of organizing, boycotts, and other pressure on the Growers Association to win.

Many in labor are skeptical that guestworkers can be organized on a large scale.

FLOC, part of the AFL-CIO, is now working with the United Farm Workers, a union formerly at odds with guestwork in agriculture, to push for agricultural workers to be protected in whatever legislation passes. The UFW plans a series of marches in farmworker communities in California and Arizona.

Gone are the days when most union policies were simply anti-immigrant. Unions have committed to organizing immigrants and supporting equal rights at work.

The questions for labor in this year’s reform debate are whether it can nail down immigrants’ rights on the job, how many it can include under the umbrella, and how it can avoid a bill that contains too many sticks for too small a carrot.

A Spanish translation of this article is here.

Samantha Winslow is co-director of Labor Notes.samantha@labornotes.org
Related
Viewpoint: Abolish the H-2A Program! »
Trouble in the Tulips: Organized Farmworkers Win Basic Demands in a Quick Strike »
Mexico’s Only Independent Farmworker Union Struggles On Despite Obstacles »
Billionaires Can Have the Cosmos—We Only Want the Earth »
Don’t Compromise on Farmworker Rights »

Labornotes readers might be interested in the exchange/dialogue that took place on the Labornotes webpage when the AFL-CIO and CTW issued their position on immigration reform, the document that guides their present position. The URL is: http://www.labornotes.org/2009/06/immigration-reform-whats-labor It would have been a good idea for this article to have also interviewed people supporting a much more progressive and pro-labor reform proposal, the Dignity Campaign, which involves groups around the country including several labor councils and unions, LCLAA, day labor centers, farm worker organizations and longtime immigrant rights defenders. This proposal has been the progressive pole in the national debate over immigration reform for at least the last three years. For unions and workers, the repeal of employer sanctions (not simply saying that E-Verify shouldn't be expanded) is a longtime progressive demand, because it is the basis for E-Verify and I-9 audits, which have led to the firings of thousands of undocumented workers. In addition, this demand is what we fought for and won at the AFL-CIO convention in Los Angeles in 1999. I was surprised at the absence here of any voices calling for the elimination of guest worker programs, the historic demand of labor activists dating back to Bert Corona, Ernesto Galarza and Cesar Chavez. Progressive labor and immigrant rights activists have also called for scrapping, or at least renegotiating NAFTA, CAFTA and other trade agreements and structural adjustment policies as part of immigration reform, because they cause massive poverty and displacement of people and make their migration a matter of survival.