Viewpoint: When Auto Plants Reopen, Some of Us Will Die for Corporate Profit 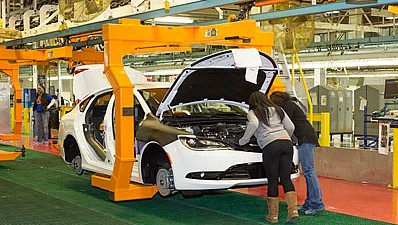 Distancing is impossible in auto assembly plants. These workers are at Chrysler's Sterling Heights Assembly Plant near Detroit, where a refusal to work was a trigger of the industry-wide shutdown. Photo: Jim West, jimwestphoto.com, cropped from original.

Despite all the evidence that we are nowhere near out of the woods with the coronavirus pandemic, the Detroit automakers and the United Auto Workers (UAW) have agreed to restart production at most facilities on May 18. Various part supplier facilities will restart even sooner.

When the auto industry first started addressing the pandemic in March, the joint task force of UAW President Rory Gamble and executives from the Big Three claimed there would be “extensive deep cleaning of facilities between shifts” and “extensive plans to avoid member contact.” But before the plants were idled, workers at many facilities reported that the bathrooms still weren’t regularly cleaned and were often without paper towels, soap, or toilet paper. Deep cleaning occurred at hardly any of the production plants at the time.

What's more, virtually nothing was done—or can be done—to avoid member-to-member contact on the assembly lines on many of the jobs in these plants.

It’s no surprise then that many auto workers are skeptical that safety precautions will actually be implemented successfully as production resumes.

Not one worker who will actually be exposed to the working conditions in these facilities on a daily basis was a part of the joint task force. Instead, these decisions were made entirely by the Detroit Three executives and the top brass of the UAW, who rarely—if ever—visit these worksites.

For all the bluster from Gamble, who claimed that the UAW would not move on the point of worker safety, ultimately the union yielded on the Big Three’s terms.

Gamble told the Detroit Free Press on April 23, “We don’t see a solid opinion from medical doctors or scientists that it is time to reopen society. You’ve got to understand, in a manufacturing environment we can put a lot of protocols in place that will help mitigate the spread of the virus but it’s almost impossible to practice 100% social distancing. Our members are going to be working in this type of environment for a long time with the threat of infection hanging over them.”

What medical or scientific opinion has changed since then?

NO TIME FOR A SIGH OF RELIEF

Erin Bromage, an associate professor of comparative immunology, recently wrote, “It seems many people are breathing a sigh of relief, and I’m not sure why. An epidemic curve has a relatively predictable upslope and once the peak is reached, the back slope is also predictable. Assuming we have just crested in deaths at 70,000, that would mean that if we stay locked down, we lose another 70,000 people over the next six weeks as we come off the peak.”

The automakers have agreed to give paid leave of up to 14 days for any worker who must self-quarantine because of a coronavirus infection. But obviously this is after infection. Fourteen days of paid medical leave means little in a body bag.

In a press release about the Ford restart date, Gamble said, “the companies have the sole contractual right to determine the opening of plants.” Apparently, it never mattered whether the UAW was actually satisfied with working conditions or not.

They can beg. They can plead. But in Business Unionism 101, a union has no power when it comes to worker safety during a worldwide pandemic. Collective action by the rank and file is an afterthought. Negotiations start with the union already on its knees.

As General Motors retiree Gregg Shotwell said, “The Big Three tells the UAW to jump, and the UAW asks, ‘How high?’”

The United States is still confirming roughly 25,000 new cases of the coronavirus every day. At least 1,000 Americans have died from the disease every single day since April 2; there have been nearly 1.4 million reported cases and more than 80,000 deaths.

According to the Centers for Disease Control, racial and ethnic minority groups, the elderly, and people with underlying medical conditions are at higher risk to contract the virus. These underlying conditions include moderate to severe asthma and other respiratory problems, obesity, high blood pressure, diabetes, and kidney or liver disease.

How many of our brothers and sisters have at least one of these underlying conditions? The Kaiser Family Foundation estimated that 4 in 10 adults in the U.S. are at elevated risk, including 41 million people under age 65.

If you’ve ever worked on an auto assembly line, you know there is very little the corporations can do to carry out the CDC’s six-foot social distancing guideline. Many of us work side by side with others for at least eight hours a day, at least five days a week.

For example, in my plant on the door line, many workers do their jobs face to face with co-workers only a couple of feet apart. On the headliner install job, where workers attach a composite material to the inside of the vehicle's roof, at least three workers are within six feet of each other as each worker snaps in a corner of the headliner. Masks are not a fail-safe precaution.

Bromage describes how workplaces can quickly become some of the worst breeding grounds for COVID-19. He explains that “if a person is infected, the droplets in a single cough or sneeze may contain as many as 200,000,000 (two hundred million) virus particles which can be dispersed into the environment around them.”

He advises against using public bathrooms at this time, as a toilet without a seat to close releases “8,000 droplets into the air during a single flush. If the person using the restroom before you was infected, you have a chance of contracting the virus breathing the air in the bathroom.”

To my knowledge, none of the men's restrooms at my plant have seats that cover the tops of the toilets. These are toilets that are each used dozens of times a day.

Talk is cheap, especially during this pandemic. Most workers don’t care about PR statements by the corporations and the UAW continually assuring workers that worksite health and safety are their top priorities, and that “we are all in this together.”

If these press releases were true, UAW Local 167 Bargaining Chairman Travis Watkins would not have been terminated for informing members about suspected coronavirus cases in his plant. Workers have a right to know what health and safety risks they may encounter. Watkins was fulfilling his union duty. He was placing the members’ safety first—as every union official should!

Travis Watkins has still not been reinstated, and the UAW appears to have very little to say about the situation.

What message does this send to the members? If our health and safety are the stated top priorities of our leaders, where is the outrage from our International officers when a union official is fired for protecting his brothers and sisters?

It's worth noting that as International UAW officials return to their own workplaces, they will all receive a nasal swab test for the virus and a test for antibodies. Workers in the auto factories will not be so lucky.

CAN’T WAIT FOR LEADERS TO SAVE US

Autoworker Caravan, a reform activist group within the UAW, has started a petition to demand N95 respirators for every worker and other precautions before plants are reopened. The petition now has over 1,500 signatures.

The petition won't be enough to change the minds of Detroit auto executives.

Ultimately, the only power that the rank and file has ever had is through collective action. Auto workers keep waiting for the next Walter Reuther, but no one is going to protect us during this pandemic unless we protect ourselves. As Eugene V. Debs, one of the founders of the Industrial Workers of the World, said more than a century ago, “Too long have the workers of the world waited for some Moses to lead them out of bondage. He has not come; he never will come. I would not lead you out if I could; for if you could be led out, you could be led back again.”

If workers genuinely feel unsafe about their working conditions, they have the right to refuse the work.

If we don’t stand in solidarity now to protect the most vulnerable of our brothers and sisters during this pandemic, we are all but assuring that some of us will die so that corporate executives can extract a few million more dollars from our labor to buy another beachfront property. Not one single solitary worker’s life is worth losing for that.

Justin Mayhugh is a UAW auto worker at the GM Fairfax Assembly plant in Kansas City and a member of Unite All Workers for Democracy (UAWD).