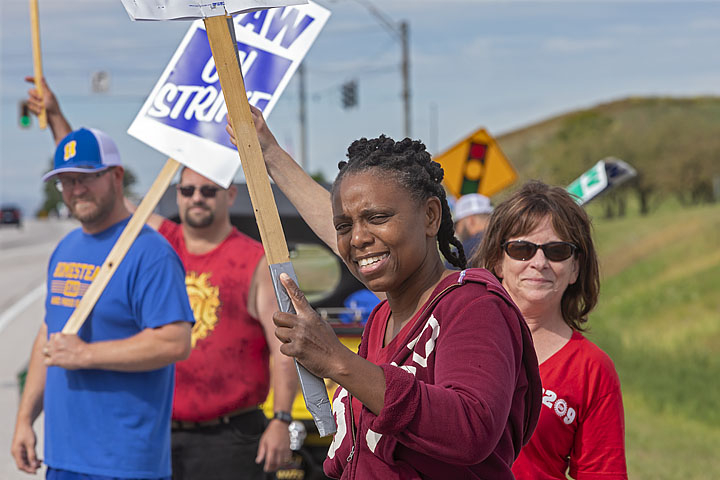 General Motors workers have been on the picket lines for 17 days now, and just picked up their first weekly strike pay of $250. Strikers wonder who will hold out the longest—a workforce seeking justice or an immensely profitable corporation demanding more concessions?

GM’s huge profits—$35 billion in the last three years—are both a spur to the strikers, who know GM can afford to pay, and a source of strength for the company, which has a well-padded cushion. Strikers, some of whom make as little as $15.78 an hour, have less of a fallback. With strikes a rarity at the Big 3 automakers, workers may not have expected their leaders to call one this year.

But GM turned out to be playing harder ball than the United Auto Workers pro-cooperation leaders were expecting, and thus the strike, which has gone longer than Wall Street expected. UAW Vice President Terry Dittes reported Monday that the two sides were not close to an agreement.

The company has reportedly floated raising workers’ health insurance costs; creating a new, lower-paid tier of workers to build batteries; paying bonuses in alternate years instead of wage increases; and keeping the wage boost to 4 percent over four years.

If there’s a picket line near you, show up! Bring a friend, or a whole carpool.

Maybe bring some refreshments. Pick up a sign, join in the chanting, and walk the line for a couple hours.

This is besides GM’s ambition to staff the factories with even more temporaries than it has now. The company admits to 7 percent of the hourly workforce; it also has thousands of contractors with no job security in the salaried ranks. German, Japanese, and Korean-owned factories in the U.S., with no union contracts, already rely heavily on permatemps.

And of course GM sees no reason to give back any of the myriad concessions the union made in 2007-2015: half pay and no pensions for new-hires, plus other new “tiers,” a total of at least eight; an end to COLA; no daily overtime pay after eight hours (only after 40 hours per week, as required by law); and elimination of the supplemental unemployment benefits fund, designed for the predictable times of layoffs in the cyclical industry.

WHAT TO LOOK OUT FOR

What should GM workers—and their Ford and Chrysler counterparts—be looking out for when a tentative agreement is finally reached?

UAW leaders said next to nothing about concrete demands before the strike began, and they have been almost as tight-lipped since. Official communications now call for “fair wages, job security, our share of profits, affordable quality healthcare, and a defined path to permanent seniority for temps.” Four of these are vague, leaving negotiators plenty of wiggle room. What is a fair wage? When is health care affordable?

The exception is the language on temps. A cynic could worry that members are being warned in advance—temps will not be made whole anytime soon.

Nor is there a mention of shortening the eight-year “path” from second tier to first, or making axle plant workers equal to assembly plant workers, or getting rid of super-low-paid GM Subsystems workers, who handle parts inside assembly plants. A category created ostensibly to build electric vehicles more cheaply, they work for a GM subsidiary but are under a separate, bare-bones UAW contract.

On the picket lines, there’s a whole different sense of what’s needed. Almost to a person, workers asked their priority demand say some variation on “hire the temps permanently.” The notion that temps are in any sense temporary, hired to fill in for emergencies, has long been given up. The 2015 GM contract spells out wages for temps who have five, six, and seven years’ seniority. (It also cut wages for temp new-hires by 7 percent.)

“End the tiers. Pay everybody the same with the same benefits,” said Detroit-Hamtramck Assembly worker Greg Frost—who, with 42 years’ seniority, is at top pay himself.

James Fulks, another 42-year veteran, said, “Make the temporary employees whole, because they’ve been working here for years. And bring down the years to get to the top tier—eight years is kind of stretching it... It’s unfair to take advantage of them, someone who has four mouths to feed, while upper management is making what they’re making.”

Liz Malone, a Ford worker visiting the line, said, “Give us back everything they took and don’t take no more. The TPTs are working just as hard as we do.” (“Temporary Part-Time” is Ford’s term for these workers.)

One body shop worker, Cassandra Gaddis, had bounced from one Ford plant to another and undergone a plant closing before ending up at GM. Her top demand was to keep open her current plant, Detroit-Hamtramck. What if the cost of doing so was a $17-an-hour wage, as GM has floated? “Absolutely not,” Gaddis said.

A large number of Big 3 workers have a child, a parent, or another family member in the plant. The companies have long given hiring preference to relatives.

But this seemingly sweet policy is backfiring now. As new hires fell behind in pay and benefits, they had their own advocates inside the plants. GM divided workers by pay within families; families are uniting to fight back for their own and for others’ young relatives. Divide-and-conquer by age bites back.

Melanie Binder is third-generation GM. Her grandfather, dad, and uncles worked there. “When I call my dad and I tell him what’s going on in here,” Binder said, “he always says, ‘That’s not right.’ He can’t believe how things have changed. I’m in prayer that [the UAW bargainers] will do what’s best for all of us and not just for themselves.”

Binder spoke of not wanting her father’s pension to be cut: “You have to be careful and not vote away something that could be crucial.”

The UAW has floated the idea that it would keep workers on strike while they vote on a tentative agreement, which is not its usual practice.

UAW bargainers will likely try to thread the needle between GM’s demands and the rank and file’s. They don’t want a repeat of 2015, when Chrysler workers voted down 2-1 a contract that had no “path” to regular wages for the second tier at all. Bargainers were forced to return to the table, where they negotiated the eight-year path—but also allowed a far greater use of temps.

Will a long strike make GM workers even more determined to get a good contract, and thus more willing to vote no? Or will it wear them down?

They should beware of a contract with a big signing bonus and big buyouts aimed at eliminating “legacy” workers, if all it offers temps is a raise and a bonus—no permanent status. Or the bargainers might move some of the current temps to the lowest rung of the second tier—and then start a new, unlimited pool of temps, thus re-creating the inequality for another four years.

In any case, GM workers have the right to read their entire contract, not just the rah-rah “highlights,” discuss it among themselves, agitate at the informational meetings, rally, and print up flyers and Vote No T-shirts as Chrysler workers did in 2015. They have the right to vote no, and the union has the right to re-start the strike after a no vote.

Jane Slaughter is a former editor of Labor Notes and co-author of Secrets of a Successful Organizer.
Related
Ohio Auto Parts Workers Strike to Unionize »
Opening the Door to a More Democratic UAW »
Auto Workers to Vote on Direct Elections »
General Motors Returns to Oshawa—But Offers Only Second-Tier Jobs in a ‘Pop-Up’ Plant »
Canadian Auto Workers Fight for Contract Transparency »