Unionized Judges and Public Defenders Demand Due Process for Immigrants 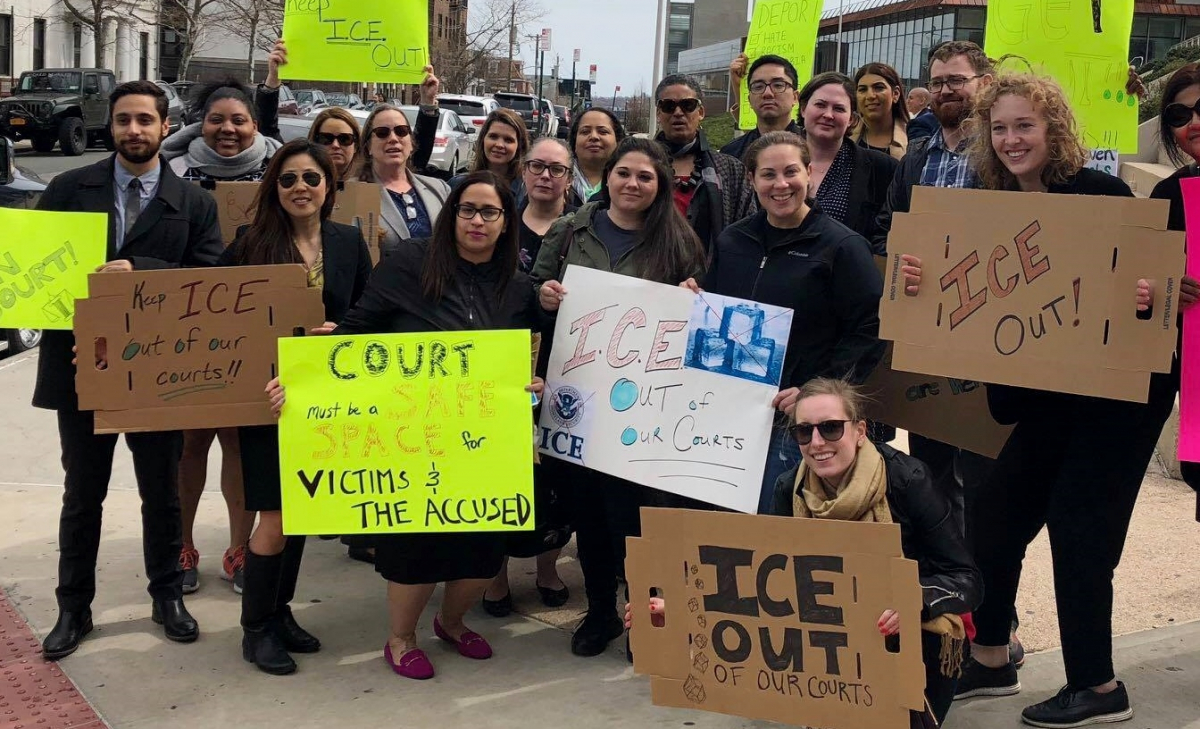 Legal Aid client Genaro Rojas Hernandez was meeting with his lawyer in Brooklyn when ICE agents grabbed him. The arrest sparked an impromptu walkout by dozens of Legal Aid Society’s public defenders, members of Auto Workers (UAW) Local 2325, to demand that the state agency that runs New York's courts must stop cooperating with ICE. Legal and immigrant rights advocates have continued the fight ever since. Photo: Association of Legal Aid Attorneys - UAW 2325

Why have New York City public defenders been walking out of the courts in the middle of the day to hold spirited demonstrations in support of their clients?

The outcry began last November when Immigration and Customs Enforcement agents were reported to lurk in the vicinity of the courts, targeting people as they entered or exited court proceedings.

Legal Aid client Genaro Rojas Hernandez was meeting with his lawyer in Brooklyn when ICE agents grabbed him.

The arrest sparked an impromptu walkout by dozens of Legal Aid Society’s public defenders, members of Auto Workers (UAW) Local 2325, to demand that the state agency that runs the courts must stop cooperating with ICE.

Legal and immigrant rights advocates have continued the fight ever since. Two hundred lawyers and allies rallied in March, insisting that ICE presence in public courts can intimidate and prevent New Yorkers from showing up to proceedings and thus interfere with equal access to adequate representation.

A sanctuary city sounds like it would mean refusing to let ICE detain undocumented immigrants. But in many cities, it only means that ICE presence is regulated and limited.

New York has continued to share enforcement databases, leading to targeted enforcement. ICE is prohibited to carry out these detentions in “sensitive” public areas such as schools and hospitals, a practice widely seen in post-Trump enforcement.

Athena Bernkopf, a paralegal at Legal Aid and 1199SEIU member, called on de Blasio, Governor Andrew Cuomo, and the state’s Chief Judge Janet Difiore to “implement policies that put this commitment into practice and not only words.”

Meanwhile another union, the National Association of Immigration Judges, has openly criticized the Department of Justice under Attorney General Jeff Sessions for interfering with the independence of the courts. The union is bringing a grievance after Philadelphia-based immigration judge Steven A. Morley was removed from a case because he had not followed the administration's preferred method of a quick deportation order.

This incident highlights how the Trump administration is targeting judges who do not follow the agenda of rapid deportations. The implications of this grievance are vast—its resolution would affect judicial independence throughout the entire immigration court system.

Another point of concern is that effective October 1, 2018, immigration judges will be subjected to performance metrics that include quotas for case completions. These quotas would drastically limit time and quality, leading to “assembly line justice.”

If the zero tolerance policy were fully applied, immigration courts would collapse due to the vast number of cases scheduled and the limited number of judge staffing.

An example of these ramifications of zero tolerance can be seen on the United States-Mexico border, such as in Texas, where judges are being video-conferenced in from across the country due to an overwhelming caseload.

Members of the coalition have documented a 1,200 percent increase in courthouse arrests from 2016 to 2017. And this year the pace of arrests is already higher than in 2017.

The coalition sent out an “ICE in NYS Courts” survey to advocates and legal service providers throughout the state. Around 225 advocates and attorneys from 31 counties in New York State participated.

The key findings were troubling:

The coalition has endorsed a state assembly bill, the Protect Our Courts Act, which would require federal immigration agents to present sufficient evidence to a federal judge before making an arrest in the court that would result in detention and deportation proceedings. The federal judge would have to authorize such an arrest before it occurs. In addition, the bill would require New York’s office of court administration to create and implement procedures for reviewing judicial warrants and court orders.

Not Just for Clients

Even legal workers can be affected by immigration issues. Another legal service union, the National Organization of Legal Service Workers (UAW Local 2320, which represents attorneys and support staff in nonprofit legal services organizations across the country) unanimously passed a recent resolution guaranteeing union support for any member who stands to lose their job if the Trump administration abolishes Temporary Protected Status, which protects immigrants from Haiti, El Salvador, and eight other countries affected by armed conflict or natural disaster, or Deferred Action for Childhood Arrivals, which offers protective status for some immigrants who came to the U.S. when they were children.

The union also committed to aid affected members in negotiating severance packages and health benefits, and getting access to social services.

Besides ICE out of the courts, rank-and-file members of the Association of Legal Aid Attorneys (ALAA, UAW Local 2325), and 1199SEIU, which represents Legal Aid paralegals and social workers, have continued our organizing in support of targeted immigrants.

We were involved in the recent campaign that stopped the deportation of Pablo Villavicencio, an undocumented immigrant who was detained by ICE while delivering pizza to the Fort Hamilton Military Base in Brooklyn.

A team from the Legal Aid Society was able to win Villavicencio a stay of removal, and filed a habeas corpus petition to have him released from detention. The day of the hearing, our unions joined with other groups to organize a rally and press conference.

ALAA and 1199 got involved in the Villavicencio case in a very direct way, helping create the campaign to “Free Pablo” along with community activists. The ALAA provided the space for organizing meetings along with acquiring official release time from work for union members at Legal Aid to participate in the rally day of Villavicencio’s court date.

The case also became a chance for members of the two unions in our workplace to organize together, and to learn organizing skills that we could use in future labor fights.

The role of our unions in this fight is a new development. Nonprofits often dominate activism for immigrants’ rights.

But “these issues that deeply affect us and that are also workers’ issues,” said Legal Aid attorney Evelyn Malave. “Pablo was at work when this happened to him.”

Legal Aid workers’ public role in his case reflects our growing understanding that it’s not enough to fight deportations solely through litigation and prosecutorial discretion, which gives judges the authority to close deportation cases based on a particular situations.

Long-lasting change, especially under the Trump administration, will require mass mobilization, publicity, workplace action, and an unwavering commitment to due process for all immigrants, regardless of past criminal backgrounds who also are entitled to due process.

“I think my role as a union member is to organize my sisters and brothers to take action,” Malave said, “to leverage the power of the collective structure that we already have in place to make change happen.”

Related
Pandemic Discrimination Against Asian Americans Has Long Roots »
Viewpoint: A ‘Union’ That Pushes to Deport People Is the Labor Movement's Opponent »
Work Is the Reason Latinos Are Getting Slammed So Hard by the Pandemic »
Corona Capitalism in Honduras »
South and Southeast Asian Workers Grapple with Management, Government, Coronavirus »