Viewpoint: Unions Are Class Organizations, and Should Act Like It 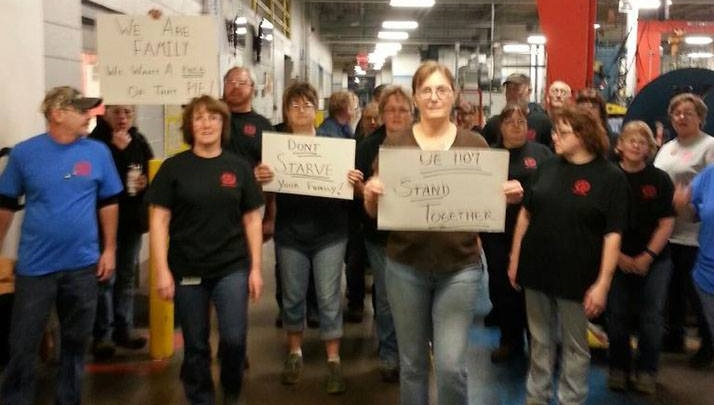 The debate over whether to give up exclusive representation is a distraction from what it takes to build power and maintain membership in a "right-to-work" state, Jonathan Kissam argues. UE Local 1107 in Necedah, Wisconsin, responded to the threat of impending open shop by pulling out all the stops to reverse a divisive two-tier wage scale--and maintained nearly 100 percent membership. Photo: UE

Introduction: How Should Unions Deal With Free Riders?

An open shop means workers are not obligated to make payments to the union. Exclusive representation means that for a given bargaining unit, only one union at a time can be officially recognized—and this union is obliged to represent all the workers, even those who don’t pay.

Brooks describes how right-to-work Tennessee’s elimination of exclusive representation in its collective-bargaining law for educators led to competition from pro-corporate “associations” of educators.

Downs counters that Brooks is overgeneralizing from his experience, and that public sector unions in highly unionized states like New York and New Jersey who lose the ability to collect “fair-share” payments from all workers should “make quitters pay” by refusing to represent them in grievances or look out for their interests in collective bargaining.

My union, United Electrical Workers (UE), covers workplaces that have recently become open-shop and others that have always been open-shop. Our experiences suggest that the question of giving up exclusive representation is a distraction.

Instead, it’s in the best interests of union members to build maximum unity against the boss, in order to extract the best possible conditions for all workers—regardless of whether they are union members or not.

Two UE locals in Wisconsin recently bargained their first contracts under the state’s 2015 right-to-work law. In each case local leaders understood that, in order to maintain membership under the new contract, they would have to put on a real fight that involved everyone, so that everyone in the shop understood the union’s value.

Local 1107 in Necedah responded to the threat of impending open shop by pulling out all the stops to reverse a divisive two-tier wage scale that had been imposed on members during the 2009 downturn in the auto-parts business.

This meant months of preparation in the shop and at membership meetings, keeping members regularly informed of what was happening at the bargaining table. T-shirt days, creative protests involving penny jars and Legos, and rallies and marches in the shop and at the bargaining location united older and younger workers, many of whom had never participated in a rally before.

These actions produced a new contract which will eliminate the two-tier system over the life of the contract, and includes no rollback of union rights other than the legally-mandated elimination of union shop language.

Local leaders at Local 1121 in La Crosse, which represents workers at an industrial laundry, knew that the looming threat of open shop meant they needed to ratchet up the struggle against the boss and make an extra effort to include all workers, not just the bargaining committee or elected leadership.

So the local began its contract negotiations with a potluck meal and discussion demands at the Hmong Community Center, with interpretation, to ensure that the large number of Hmong workers in the shop were united with other workers around their shared concerns and what demands to bring to the company.

A series of escalating actions culminated in a 45-minute walkout—the first in the local’s 20-year history—joined by every single worker in the shop.

At the contract ratification meetings, union leaders emphasized that the victory was due to members’ unity—and that to maintain the gains in the contracts, they would need to maintain that unity, including by continuing as union members.

“If someone tries to drop their membership in the union, they are trying to take food off of your kitchen table,” is how UE Western Region President Carl Rosen put it.

This moral persuasion, based on an appreciation of the importance of unity in order to win gains for all, has been successful. Both locals have retained almost 100 percent membership.

IOWA: THE BENEFITS OF LEGITIMACY

I got my own start in the labor movement a little over two decades ago, organizing with my fellow graduate employees at the University of Iowa to form UE Local 896.

Iowa was a right-to-work state, but at the time had a fairly robust public-sector collective bargaining law (later eviscerated by Republicans in 2017).

Although we won a representation election in our diverse and far-flung bargaining unit of 2,600 workers, and built a powerful and activist local that won significant wage increases and health care improvements in our first contract, we were never able to reach majority membership.

As a newly established local in an institution where we potentially had to compete for legitimacy with the Graduate Student Senate, the benefits of exclusive representation to our own members far outweighed the costs of having to represent non-dues-payers.

Had we been relieved of the “burden” of exclusive representation, the university administration almost certainly would have used that to give higher wages, better jobs, and other preferential treatment to individuals who did not join the union—thus creating an even stronger incentive for people to not join the union than just saving on their dues.

NORTH CAROLINA: A ‘MEMBERS-ONLY’ UNION FIGHTS FOR ALL WORKERS

The workers at the Cummins Engines plant in Rocky Mount, North Carolina, who are members of a Workers Unity Committee affiliated with UE Local 150, have been fighting for justice at work through their “pre-majority” or “members-only” union for over 25 years.

In fact, they were one of the primary case studies in a 2015 report on members-only unions by the progressive Century Foundation. Their experiences suggest that even without exclusive representation, unions should seek to act on behalf of all workers and prove the benefits of collective participation in struggle.

In 2004, the CDC Workers Unity Committee launched a lawsuit because, in 2002, Cummins had only paid workers 70 percent of what was due to them under the company’s bonus plans. The workers decided not to file it as a class-action lawsuit—in some ways the equivalent of exclusive representation, as all workers in the “class” would have benefited from a successful settlement.

Instead, to demonstrate the importance of worker participation in collective struggle, they formed a CDC Workers Unity Legal Fund. Workers who joined as plaintiffs were asked to pay $25 each—not only to offset the cost of the lawsuit but also, more importantly, to commit to collective action. Those who joined the Legal Fund also became associate members of the union; a number of them later joined as full members.

The union used the lawsuit to build organization. Leaders sorted the 202 workers who joined the lawsuit into 10 areas of the plant; in each area they designated lawsuit “communicators” who later became union stewards.

When the union was required to go to mediation prior to court, the members of the Legal Fund elected a 12-member negotiating committee. At the time, most Legal Fund members, and even a majority of the 30 workers nominated, were not full union members. However, the 12 workers who were elected to the negotiating committee were all full members and union leaders, which reinforced the union’s mandate as a legitimate representative of the whole workforce.

In July 2006, the workers won a summary judgment in their favor. Under the terms of the suit, the company was only legally obligated to make payments to the 202 workers who had joined the suit as plaintiffs. However, even though they had no legal obligation to, the union agitated successfully for the company to make the payout—the lost 30 percent plus 8 percent interest—to all workers who had been employed at the plant in 2002. This action sent the message that the union fights on behalf of all workers, not just its own members, and resulted in both membership growth and increased prestige for the union in the plant, with many previously anti-union workers thanking and congratulating UE members.

Unions are, or should be, organizations of the working class. Workers who are not class-conscious enough to choose to pay union dues are still members of the working class, and while we can and in some cases should shame freeloaders, we should not stop bargaining for and representing the whole class.

Related
After Strike Threat, Wisconsin Nurses Get a Possible Path to Union Recognition »
Wisconsin Nurses Set to Strike, As Employer Claims It's Banned from Bargaining »
UPS Says No to Air Conditioning, But Here’s a Surveillance Camera »
This Year, Let's Coordinate Our Contract Fights to Bargain for the Common Good »
Richmond Educators Are First In Virginia to Win Bargaining Rights »