At Home at Labor Notes 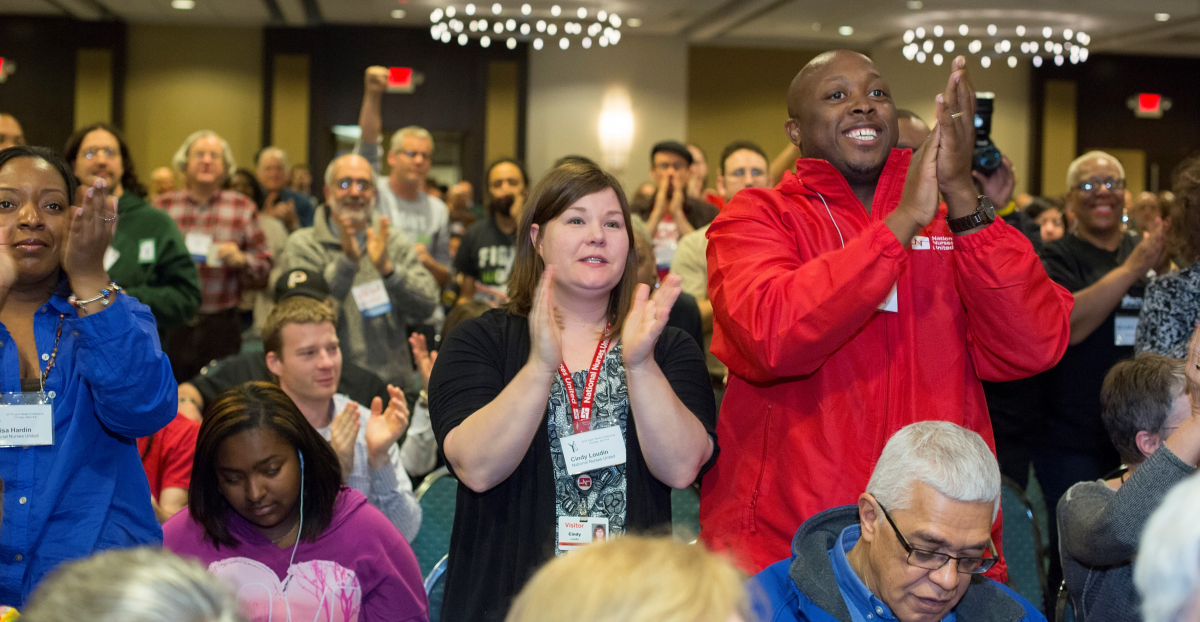 If you’ve read about an exciting campaign in the pages of Labor Notes, chances are good you’ll meet the organizers at the conference. Photo: Jim West, jimwestphoto.com

While I'm excited about seeing many of our regulars, I’m especially looking forward to meeting first-time attendees at what could be the biggest Labor Notes Conference yet, in Chicago April 6-8. Here's how I know they're going to like it.

I first came across Labor Notes in 1990, when I was eight years old. My dad, who was taking night school labor studies classes, subscribed on the recommendation of his instructor. At his warehouse, he and his co-workers were seeing a good job turn bad, and they were hungry for ideas on how to fight back.

Management was pushing a relentless speed-up, and their Teamsters local was doing nothing. The union had agreed to a two-tier contract without a fight, sowing division between young and old.

In the pages of Labor Notes, my dad found a connection to others confronting the same issues—others who were refusing to sit back and take whatever scheme management concocted; others looking to change their unions. He found some hope for a labor movement that was so often getting its butt kicked.

We don’t always win. One day I came home from school and my dad’s car was parked outside our apartment. He never came home that early. He’d been fired, allegedly for not working fast enough. The union did nothing, seemingly glad to see him go—another troublemaker out of the way.

He put up a spirited fight, thanks to the resources he’d been connected to through Labor Notes. And though he didn’t win, he’s stayed a Labor Notes subscriber all these years, and he’s still a union member, now driving a county bus.

For almost 40 years, Labor Notes has been uniting scattered workplace activists, giving them resources, allies, a big-picture vision, and, above all, hope.

Every two years, members of that network gather at the Labor Notes Conference. It’s the best place to link up, face to face, with a couple thousand others who are devoted to rebuilding a real labor movement. It’s a big dose of inspiration, which God knows we could use right now.

If you’ve read about an exciting campaign in the pages of Labor Notes, chances are good you’ll meet the organizers at the conference. Those West Virginia teachers featured on this month’s cover? Some are driving up to Chicago.

Teamster retirees who’ve built a grassroots movement to save their pensions? Missouri union members who collected 300,000 signatures and stopped a right-to-work law? They’ll be there.

We’ve also got a delegation of 28 Japanese workers and labor lawyers, fresh off two Troublemakers Schools there in November. They’ll be bringing the Japanese translation of Secrets of a Successful Organizer—which sold 2,000 copies in its first three weeks!

We’ll have activists from an Amazon warehouse in Poland, to talk about how they're organizing against the logistics bosses who have turned good jobs into bad ones, as my dad witnessed.

While we put the spotlight on successful struggles, plenty of us at the conference will have lost more than we’ve won. Nothing to be ashamed of—it’s a sign that we felt something was wrong and decided to do something about it!

At the conference you’re sure to pick up some tips and make connections that help your organizing going forward. And we think you’ll emerge inspired to keep at it over the long haul.

See you in Chicago!

To register for the Labor Notes Conference, visit labornotes.org/2018.