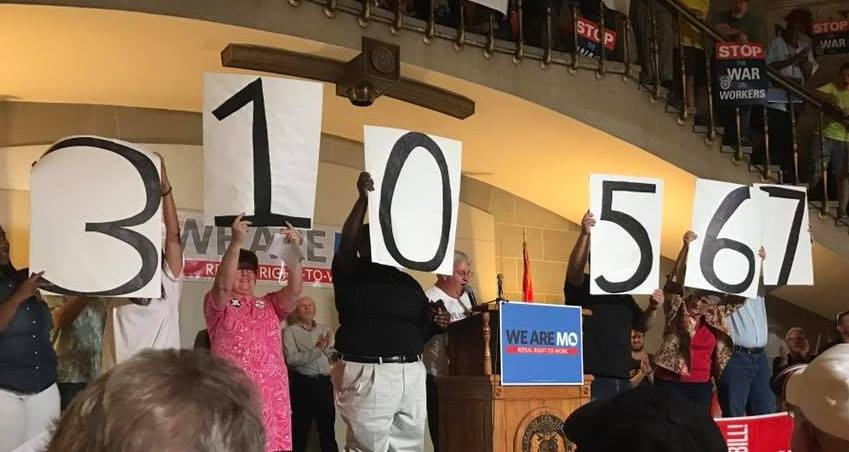 After a grassroots effort gathered 310,567 signatures, Missouri was forced to postpone the implementation of right to work till November 2018, when voters will determine its future. Photo: We Are Missouri

The results astounded everyone who thought they knew the Missouri labor movement: more than 300,000 signatures to repeal “right to work.”

Thousands of union members and allies marched through the streets of the state capital August 18 to deliver 163 boxes of petitions signed by 310,567 Missourians. The signers called for a referendum to repeal the right-to-work law passed by the legislature earlier this year.

The signatures gathered were more than three times the number needed. Although signatures were needed in only six of the state’s eight Congressional districts, there were enough to qualify from all eight, and they came from all 114 Missouri counties. The state was forced to postpone the August 28 implementation of right to work till November 2018, when voters will determine its future.

The petition drive was coordinated by We Are Missouri, a coalition of unions both in and out of the state AFL-CIO. Volunteers from Missouri Jobs with Justice and the Sierra Club stepped up, too.

Most of the money for the campaign came from Missouri unions, with contributions as low as $100 and as high as $83,000. Much bigger donations came from labor PACs representing the state AFL-CIO, Teamsters, and Carpenters. As of August 31, the labor side had raised $1.36 million and spent almost half of it.

With over a year to go until the vote and with deep pockets and interests on each side, the Missouri right-to-work duel promises to be the most expensive and ugly in state history. Many here are having flashbacks to a previous clash—the 1978 attempt to put right to work in the state’s constitution.

The victory for labor in 1978 became a textbook campaign. Labor mobilized an army of volunteers to tramp the state speaking, rallying, and inundating media from small towns to big cities. When they started, polls showed 62 percent favored so-called “Freedom to Work” legislation, with only 24 percent opposed. Even 43 percent of union members supported right to work.

Labor started out divided and politically ineffective, even though union density at the time was still over 30 percent. One member said of union leadership, "They're afraid to mobilize their own rank and file. Many are given cushions by their uncle or father… And they think, ‘If I get someone to do something, I'll build a potential candidate to run against me.’”

Nevertheless, labor united to defeat while simultaneously electing dozens of pro-labor Democrats. The lessons of that battle should be relearned for the upcoming campaign. Already the petition drive, which began in April, has trained and given a taste for activism to hundreds of union members and allies.

Laura Swinford, communications director for We Are Missouri, summed up the campaign against right to work this spring and summer: “It took on a life of its own. They did this with sheer grit and determination.”

She estimated that only about a third of the signatures were gathered by paid staff who worked for the consultant Field Works. A majority of petitioners were rank and filers.

Brian Simmons of Machinists Local 778 took on a coordinating role in very red Cass County, south of Kansas City. He was elated with the newcomer activists from various unions. “They began saying ‘Brother and Sister,’” he said. “You ask ’em to turn out, and they do. They ask ‘how can we do better?’ We had people asking where to go when they got run off a spot. They’d be willing to go across town, telling me, ‘I’m on it.’

“Our August union meeting rarely gets a quorum, but we had a packed house, and the first thing they wanted to know was ‘how are we doing?’ We kicked ass.”

“We have more attendance at meetings. People are asking about stuff to do. Something like this gives people hope. We have nominations on Friday, and I think we’ll get more candidates than before.”

Shuler said his members are now circulating other initiative petitions: to limit campaign contributions and lobbyist gifts to Missouri legislators and end gerrymandering, and one from Jobs with Justice to raise the minimum wage—though his members make well above the current minimum of $7.70.

Roy Gunter, retired Electrical Workers (IBEW) wireman, is past president of the Southeast Missouri Labor Council and was active in the 1978 campaign. Back then his corner of the state had 50 shoe factories. Now there are none. Some counties lost half their population. There’s only one newspaper left.

With the loss of jobs and unions, the district became overwhelmingly Republican. Gunter’s state rep, Holly Rehder, took $10,000 from David Humphries, a roofing supply manufacturer who with his family pumped $2 million into state candidates. Rehder became the House sponsor of right to work.

We Are Missouri wrote off the area and sent no paid petitioners. But volunteers like Gunter became avid petitioners, collecting 32,000 signatures in the district, double what was needed. Now Gunter is optimistic. He thinks a lot of people don’t like David Humphries telling their legislators how to vote. He says, “There’s a movement. The couch sitters aren’t sitting anymore.”

Lots of volunteers got a card table and a chair, made a sign, and picked a busy corner or parking lot. Kelly Street is a freight car mechanic and local chairman for the Machinists. Though he puts in 40 hours plus overtime for Union Pacific, he decided to make signature gathering in Cass County his summer project.

His sign said, “Right to Work is Wrong for Missouri. Sign the petition here.” He got more than 800 signatures. “I went out to the people,” he said, “instead of having the people come to a union hall.

“The more states that go right to work,” he told his fellow railroad workers, who wouldn’t be directly affected by the bill, “then they’re going to push for federal—and then it’s going to bother you and you’re going to wish you had stood up.”

The experiences of these activists show that even Missouri’s conservative labor movement can rise up from the lethargy caused by years of attacks and constant slander by Republicans.

This campaign has forced both leaders and rank and filers to break out of their silos. They’re getting out into the community and rural areas. A new generation of young activists is beginning to understand how to build power.

Meanwhile, dark money is pouring in to defend right to work. It will dominate the air wars. How can unions win, in a state where Trump won all but four counties?

Several people mentioned three things: Voter registration. Learning how to talk about right to work with non-union people. And deeper ties with allies like the NAACP, Missouri Faith Voices, Jobs with Justice, student groups, the Fight for $15, and Indivisible. Roy Gunter looks to the Bernie movement and young people.

Kelly Street already has plans: “I’m going to go to a lot of the towns, take some signs and talk to people out there. If we have the same amount of turnout as people who signed this petition, this will be no problem.”

In 2018 Missouri can help reverse the pendulum in the Midwest, not only to undo right to work but also to revitalize its labor movement. This happened after the 1978 fight, and the momentum is there to do it again.

Judy Ancel is a labor educator at the University of Missouri-Kansas City and a leader in KC Jobs with Justice. In May her program was suspended and she was laid off due to massive budget cuts from the legislature.

Related
Richmond Educators Are First In Virginia to Win Bargaining Rights »
Academic Workers Join Push for One Member, One Vote in the UAW »
Auto Workers to Vote on Direct Elections for Officers »
Janus for the Rails and Air? »
Why Missouri 'Right to Work' Went Down in Flames »