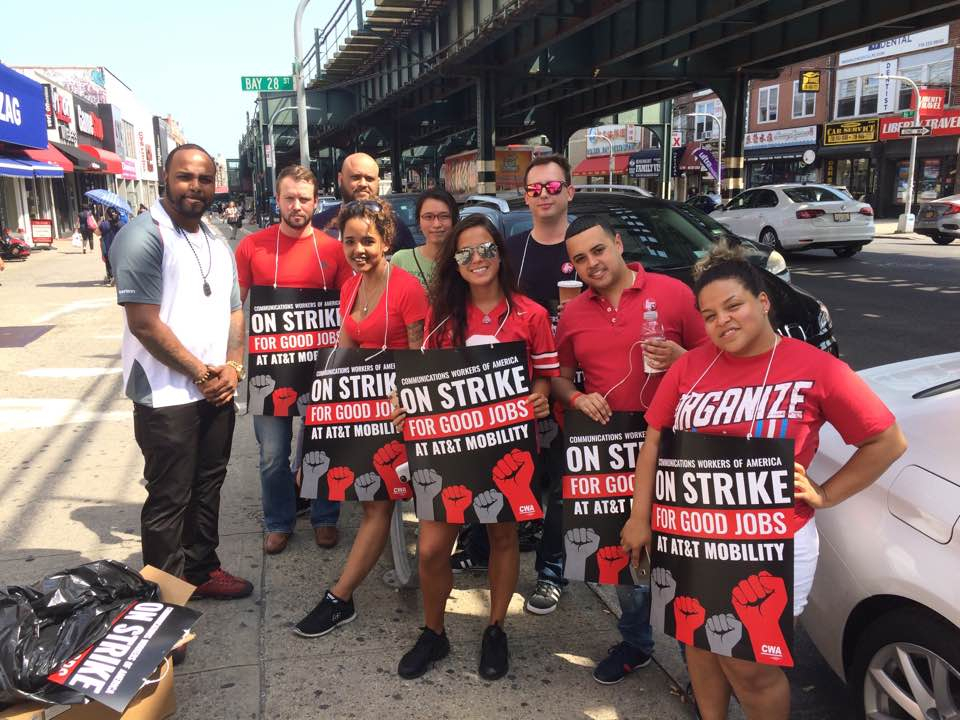 Workers at the AT&T Mobility store in Bensonhurst, Brooklyn, struck at 3 p.m. on Friday, May 19, along with 40,000 AT&T workers in 36 states across the country. Photo: Dan DiMaggio

Forty thousand AT&T workers in 36 states launched a three-day strike on Friday afternoon, as they continue their push for new contracts with the telecom giant, the tenth largest company in the U.S.

It’s the first strike ever for 21,000 retail and call center workers and technicians in the company's wireless division, Mobility. They're joined by 17,000 AT&T wireline workers in California, Nevada, and Connecticut, as well as DirecTV technicians in California and Nevada. All are members of the Communications Workers (CWA).

Workers are fighting to get commitments from the company to preserve good union jobs in the face of AT&T's offshoring of call center jobs to low-wage vendors and increased use of low-paying, non-union authorized retailers. They're also fighting AT&T's efforts to hike the cost of health benefits, and trying to improve service by getting the telecom giant invest to in its core business.

Labor Notes spoke to a few workers on day one of the strike in New York City. If you’re on strike and would like to talk to us, e-mail dan[at]labornotes[dot]org.

Unions and community organizations around the country are mobilizing members to picket over the weekend.

Labor Notes encourages you to join a picket line on Saturday and Sunday! Find locations HERE, or by contacting the CWA local in your area.

Everybody was out on strike at the Mobility store at 1014 Southern Boulevard in the Bronx. “It’s an amazing feeling to have everybody together and unified for the first time,” said Ghiajaira Paz, a sales support representative and union steward there.

Paz has been at the company for seven years, and said she’s seen a “drastic change” during that time. The company’s been increasing reps’ workload without paying them more, she said. “When I was first hired as a sales support rep, it was just customer service—SIM card changes and stuff like that. Then they changed us to being a greeter, and signing in people. A year later, they eliminate finance reps—so now we’re the back end and the front end. And when they did that, we didn’t get a raise.”

These changes mean a lot more work, according to Paz. “A lot of the time we don’t mind the work—if we were compensated for it. We were hired to work—but we weren’t hired to work and then have everybody else’s job added on top of that without getting paid more.”

Another major frustration for Mobility workers is the company’s sick-leave policy. Workers get a point for each day they’re out sick. If you get eight points in a year, you’re fired—even though workers are entitled to 10 sick days in their contract.

“You can’t take a day off without them giving you a point,” said Paz. “If you’re sick, you can’t just call out—you have to go to the doctor.” If workers don’t want to get a point for being out sick, they have to get an FMLA form when they return to work, and then take it back to the doctor to be filled out. And even then, added Paz, the company might reject their claim because, for example, the doctor filled out a line on the form wrong.

All the workers also came off the job at the AT&T Mobility store in Bensonhurst, Brooklyn. “Every year it seems like it’s gotten worse and worse, as far as pay, health benefits, you name it,” said Ervin Abreu, who’s been with Mobility since 2008.

Workers say they’re dealing with constant changes to their commission structure, as well as stagnant pay. “The cost of living is going up, and we’re stuck at the same wage,” said Cinenyi Rodriguez, who’s worked in the Bensonhurst store for a year and half.

Rodriguez echoed complaints about doing more work for the same pay. “They closed the device support center in the back, and now we have to do that work, like tech problems and transferring of data for the same amount, which takes away from your selling time, and your managers hold you accountable at the end of the month,” she said.

Colin Hull joined the AT&T picket on his lunch break from the Verizon store. “I came to support my AT&T brothers and sisters for the same reason we went on strike: better pay and better conditions, and just to have that sisterhood and brotherhood,” Hull said.

Workers have been getting support from the public as well, said Paz. "A lot of people are very receptive—they stop, they talk to us, they want to know a little bit,” she said. “They would point at AT&T and say, ‘Treat your employees right.’”

This strike comes as part of the largest-ever contract mobilization at AT&T Mobility. In the lead-up to the strike, workers in retail stores and call centers across the country workers have been sporting buttons, picketing on their days off, plastering union flyers on their lockers, and blowing up Facebook with pictures of their activities. These actions have helped knit together a sense of solidarity among 21,000 union members at Mobility dispersed throughout 36 states.

Dan DiMaggio is assistant editor of Labor Notes.dan@labornotes.org
Related
Workplace Bullying in Higher Education is Rampant. We’re Fighting Back »
Farm and Construction Equipment Workers Strike in Iowa and Wisconsin »
Amazon Bites Back in Vote at Second New York Warehouse »
Labor Notes Conference 2022: It’s Gonna Be Big »
A Life in Transit: ‘What You Can Get Is Set by How Far You Are Prepared to Go’ »

The only thing I would like to see added to this otherwise super article is a quick reminder of AT&T Mobility's income last year (2016).

While I can't easily find their 2016 income online, I see from a Wikipedia article (1) that Mobility's 2015 revenues were $78.12 Billion and their "operating income" (2) was $18.23 Billion. Yes, BILLION, folks. And yes that is AFTER having paid out workers' wages. Crimeny. Most of the countries on the planet do not come close to that kind of revenue, and certainly not that income (i.e. surplus). ALMOST 200 WHOLE COUNTRIES DO NOT. (3)

Even if you go further and subtract taxes and interest -- which have nothing to do with worker wages -- from that to get the "net income" -- you're still looking at $2.39 Billion!!!

Keep in mind also those numbers are just one division -- not all of AT&T, whose parent company racked up even more. (4)

Umm... yeah, but, .."we still need to make cuts every year and increase everyone's workload because .. we're really hurting, have no money coming in .. and are in danger of not being able to pay our bills.."

When will we do what our grandparents did the better part of a century ago and return to insisting on phones being a UTILITY regulated by we the people -- not a big selfish greedy corporation? Better yet, single-payer internet and single-payer phone. Cut out all the rubbish.