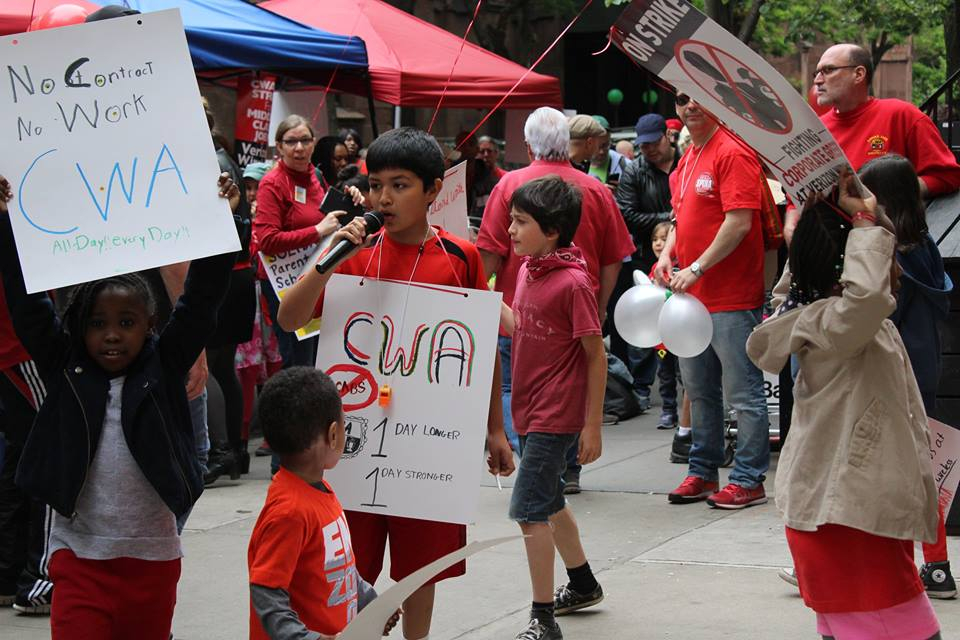 Verizon strikers returned to work June 1 with their heads held high. Workers' kids joined them in a May 21 "Family Day." Photo: Stand Up to Verizon

Thirty-nine thousand Verizon strikers returned to work June 1 with their heads held high, after a 45-day strike in which they beat back company demands for concessions on job security and flexibility, won 1,300 additional union jobs, and achieved a first contract at seven Verizon Wireless stores.

“Walking into work the first day back chanting 'one day longer, one day stronger' was the best morning I've ever had at Verizon,” said Pam Galpern, a field tech and mobilizer with Communication Workers Local 1101. “There was such a tremendous feeling of accomplishment. People were smiling and happy. It was like a complete 180 degree difference from before the strike.”

The CWA and Electrical Workers (IBEW) won a 10.5 percent wage increase over four years, increased contributions to their pensions, protections against outsourcing of call center jobs, and a reversal of the sub-contracting of some pole work.

Verizon will also eliminate the hated Quality Assurance Review system, an effort to micromanage the workday. Managers would bring techs in for two- to three-hour interrogations about their daily activities and dish out 30-day unpaid suspensions. In the months leading up to the strike, QAR infuriated technicians in New York City.

On top of this on-the-job harassment campaign, Verizon provoked the strike by proposing to shut down U.S. call centers, outsource work to low-wage locations abroad, cap pension contributions at 30 years, and drastically expand its ability to send employees on assignments far from home.

This was despite the unions’ granting $200 million in concessions on health care benefits—before the strike. These concessions, which include higher premiums, deductibles, and out-of-pocket expenses, remain in the new contract, though the wage increases will help soften their impact.

“The company could have done this two months ago,” said network tech Pat Fahy of IBEW Local 827 in New Jersey. “They could have done it [when the contract expired] in August … and we would have taken it.”

Instead, he said, “they forced us to work without a contract for eight months and to be on strike for almost two months. Many of us have resentment two miles long.”

“I’ll never forget what this company tried to do to me and my family,” said Ray Ragucci, a Queens FiOS tech and member of CWA Local 1106. “It didn’t have to be like this. They chose to do this. They’re very greedy.”

Secretary of Labor Thomas Perez helped facilitate the deal, intervening in mid-May to restart negotiations between the unions and Verizon.

But the real battle was won on picket lines from Massachusetts to Virginia. Strikers picketed daily outside Wireless stores, and hounded scabs and company executives wherever they went.

And they didn’t waver, even when the company cut off their health insurance on May 1. “The company didn’t think we would last two weeks—especially with the health care,” said Ragucci.

Though this strike was the fourth or fifth for many Verizon workers—nearly all have been with the company for over 15 years—it was the first time since 1989 that the company cut strikers’ health insurance.

“I didn’t know if our membership was going to be able to handle this,” said Ragucci. “In my head, I thought people might cross.”

Instead, “I think it really pissed people off,” Ragucci said. “And being that our lines stood strong, everybody took a positive attitude, and felt like we’re going to win this thing.”

“There were stages of fear, optimism, depression, anxiety, a swelling of pride,” said FiOS tech Dennis Dunn, a chief steward with CWA Local 1108 on Long Island, describing his feelings six weeks in. “I have never been more proud to be a union member—despite the fact that I am financially in ruins.”

Dunn said not a single member of Local 1108 had crossed the picket line. “Our members, they really get it,” he said. “It’s not because we want to be rich. We started here with the impression that it was a career. It used to be a great career at the phone company, and we want to maintain that.”

The risk going into the strike was that the workers might not have much leverage, given the company’s growing focus on its wireless division. Verizon seemed willing to walk away from much of its traditional wireline business.

But the strike showed that telecom workers still wield real power. The company was so behind on FiOS installations that new customers were told they would have to wait until July or August for service.

That information was revealed to the union by call center employees in the Philippines, who also said they were fielding a lot of calls to disconnect service because of the scabs’ lack of professionalism. (A delegation of U.S. Verizon workers visited the Philippines in May, after call center workers there reached out to CWA through Facebook.)

“The very same managers that ride us, that are constantly on us about our productivity every time we blink,” Dunn said, “they have no clue how to do our job. It’s comical.”

Strikers followed managers and scabs around and picketed the poles, manholes, and buildings where they’re working. Safety violations were rampant, they said—and even put the public at risk. Pictures and videos circulated widely on Facebook.

One financial analyst predicted the strike would cut Verizon’s profits this year by $200 million. Another reduced a wireline revenue forecast for the company by $826 million, thanks to the rapid decline in FiOS installations due to the strike.

Before the strike began, Verizon was pulling in $1.8 billion a month in profit. “There was no reason for this strike, because we weren’t asking for anything more,” Dunn said. “Why do you need to take anything from us when you make this much money? In the end, it’s all about just breaking the union.”

“It’s been a rollercoaster,” said Rich Corrigan, a field tech and steward with CWA Local 1101 in Manhattan, during the strike. “They’re just turning around and saying, ‘You’re not worth what you were worth last contract.’”

Still, after months of “corporate bullying” via harsh disciplinary policies leading up to the strike, Corrigan said, “getting out onto the picket line was a relief.”

Strikers’ spirits were also buoyed by public support. The highlight for Corrigan was day one, when 150 union members got front-row seats for a Bernie Sanders speech in New York’s Washington Square Park. “We were greeted at that rally like conquering heroes,” he said. “The sense that I got was, ‘Thank God somebody’s doing something.’”

“The public support was overwhelming,” Dunn said. “You don’t feel like you’re alone. We had bagels delivered almost daily on the picket line, pizza from other unions, contributions from retirees… It helps when you don’t have people driving by yelling, ‘Get a job! Go back to work!’”

Instead of dispatching its scab field technicians from its regular garages and central offices, the unions say, Verizon used hotels. The scabs in Manhattan drove rented vans and other unmarked vehicles.

“It’s astounding that a company of this size, with this reputation, was dispatching a scab workforce throughout Manhattan as an underground operation in order to avoid mobile picketers,” said Galpern.

In response, a number of CWA and IBEW locals organized “scab wakeup calls” outside hotels where workers were being dispatched.

These rowdy pickets got several hotels to kick out Verizon’s dispatch operation. But they also got the locals hit with restraining orders in New York City and Boston, on the grounds that the tactic counts as a secondary boycott.

Verizon Wireless retail store employees, on strike for the first time at six stores in Brooklyn and one in Everett, Massachusetts, toured the picket lines.

The unions sent a delegation to Verizon’s shareholder meeting in Albuquerque, where 15 strikers and supporters were arrested in an act of civil disobedience outside. And 250 strikers from Local 1101 appeared on Good Morning America, wearing red and holding union signs.

It also helped that the strike started in the midst of the New York primary. Vocal support from Senator Bernie Sanders drew media attention and helped frame the strike as a clear fight against corporate greed.

By the end, members may have been tired, but their resolve never flagged.

“We’d like to get back to work as soon as possible,” said Local 1101 steward Kim Marshall in the final week. “But we sacrificed this long, and if they keep demanding expensive givebacks, we’ll be out for as long as it takes.”

The day before the agreement was announced, 200 strikers greeted a Verizon executive outside a tech conference at New York University. In upstate New York, there were plans for a big protest outside the board meeting and convocation ceremonies at Cornell University, where McAdam is a trustee.

And health care unions were planning a June 1 day of action to draw attention to the one-month anniversary of Verizon cutting off health benefits. June 2 was to be another national day of action.

In the last week of the strike, CWA Local 1102 began leafletting outside the Staten Island Ferry. Members collected several hundred petitions from commuters who pledged to cancel their service if Verizon didn’t agree to a contract by June 10, and not to buy new Verizon products until the strike ended.

“People that get up every day and get on that boat to go to work, they know what it’s like to struggle,” said steward Christine Cannavale. “They’re behind us.”

The union was also buoyed by the growing number of groups “adopting” Verizon Wireless stores for weekly pickets. “Every day, unions and community groups were approaching us to adopt a store,” Galpern said. “Individual passersby were stopping by picket lines every day bringing pizza, water, coffee, asking what else they can do.”

'CORPORATE GIANTS CAN BE BEAT'

Verizon, meanwhile, kept adding insult to injury. The company mailed workers a letter explaining how to scab and FedEx-ed them a copy of its “last, best, and final offer.”

“In the last 22 or 23 years, since I’ve been with this company, I’ve never seen such an effort to try to break the union,” said Chuck Simpson, a customer service rep and president of CWA Local 2204 in Virginia. “Upper management coming to the picket lines and telling us something totally different than what the bargaining committee was saying, spreading rumors that replacement workers would be permanent …”

In response, Local 1108 held a “Burning the Bullsh!t” rally. “We brought all the scab letters and the final proposals and we did this big barrel barnfire,” said Dunn. “We had so much stuff, I had to burn the rest the next day at the union hall.”

For Fahy, the worsened health plan is the deal’s main downside. “If you use the health care, you’re going to pay a lot,” he said. “We need national health care—and the unions should really get in front of that one. Health care is a loser. It’s going to keep sucking value out of our contracts.”

Still, he said, “in this climate that we’re living in, just standing up and holding your ground against a company making $1.8 billion a month is a victory.”

Ragucci hopes other workers will be inspired by the Verizon example. “I think us doing what we did just lays the groundwork for other unions to say, ‘You know what? No.’ These corporate giants can be beat if we fight them.”