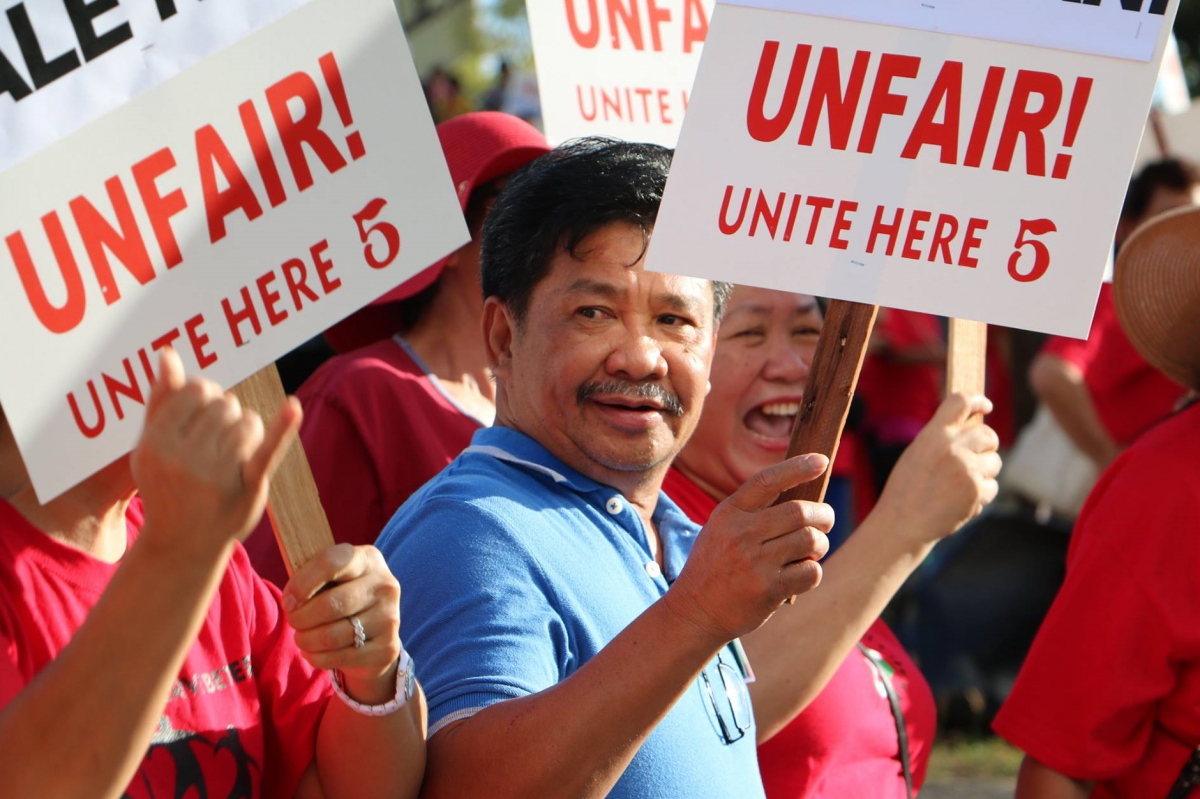 Employers should be careful what they wish for. One Hawaiian nursing home lashed out at workers with a bogus charge that they'd gone on strike. Then the workers went on strike for real. Photo: UNITE HERE Local 5

Perhaps someone in the administration of the Hale Nani nursing home has frustrated ambitions as a fiction writer.

That’s one way to explain the employer’s creative interpretation of events. The facility in Honolulu, Hawaii, lets workers wear their choice of casual clothes on paydays. But when employees picked union T-shirts with the slogan “better staffing now!” one payday in March, the nursing home sent them home for it—then charged them with an unlawful strike.

The Labor Board dismissed Hale Nani’s bogus charge in June and pointed out the nursing home was the wrongdoer here, since the workers had the right to wear union shirts.

Maybe employers should be careful what they wish for, because in May, the Hale Nani workers went on strike for real. Their three-day walkout was over several unfair labor practice charges, including the firing of certified nursing assistant Rhoda Magaoy, a prominent union supporter.

'The Rest of Their Lives'

UNITE HERE Local 5 has been in bargaining with Hale Nani since December. The workers’ major demand is to improve care by boosting staffing—in the kitchen, in housekeeping, and in patient care. They’re proposing to add one CNA per unit, per shift. Right now on a unit with 50 residents, the home schedules five CNAs on day shift, four on evening, and three on night.

Magaoy said managers push the CNAs to answer whenever a resident presses a call light, but sometimes it’s impossible—you can’t be in two places at once. The residents who end up bearing the brunt of short staffing, she says, are the most vulnerable ones, those who aren’t alert enough to complain.

“For the rest of their lives, these residents are going to live in this facility,” she said. “They deserve the best care.”

Though at first some workers were afraid to hit the picket lines, said 18-year CNA Jerwin Bragado, 90 percent took the leap and walked out. “We feel great. It’s hot, but I feel good about it. We are here on the street voicing out what is right for us.”

During their three days off the job, the strikers kept incredibly busy. Besides picketing at the nursing home, they went door to door to talk with neighbors about the issues. They leafleted downtown, gathering signatures on a public petition of support. They met with the president of the Healthcare Association of Hawaii.

They leafleted at a hotel where Avalon, the nursing home chain, was sponsoring an event, and got the banquet workers there to wear buttons supporting the strike. They visited other Local 5 members at Waikiki hotels. And they held a church service and a final rally with supportive union members and elected officials.

Striking together, Bragado said, produced a new feeling of closeness among workers on different shifts who didn’t even know each other before. Meanwhile inside Hale Nani, nurses covered the strikers’ work for three days: “Now they should realize how hard it is to be a CNA.”