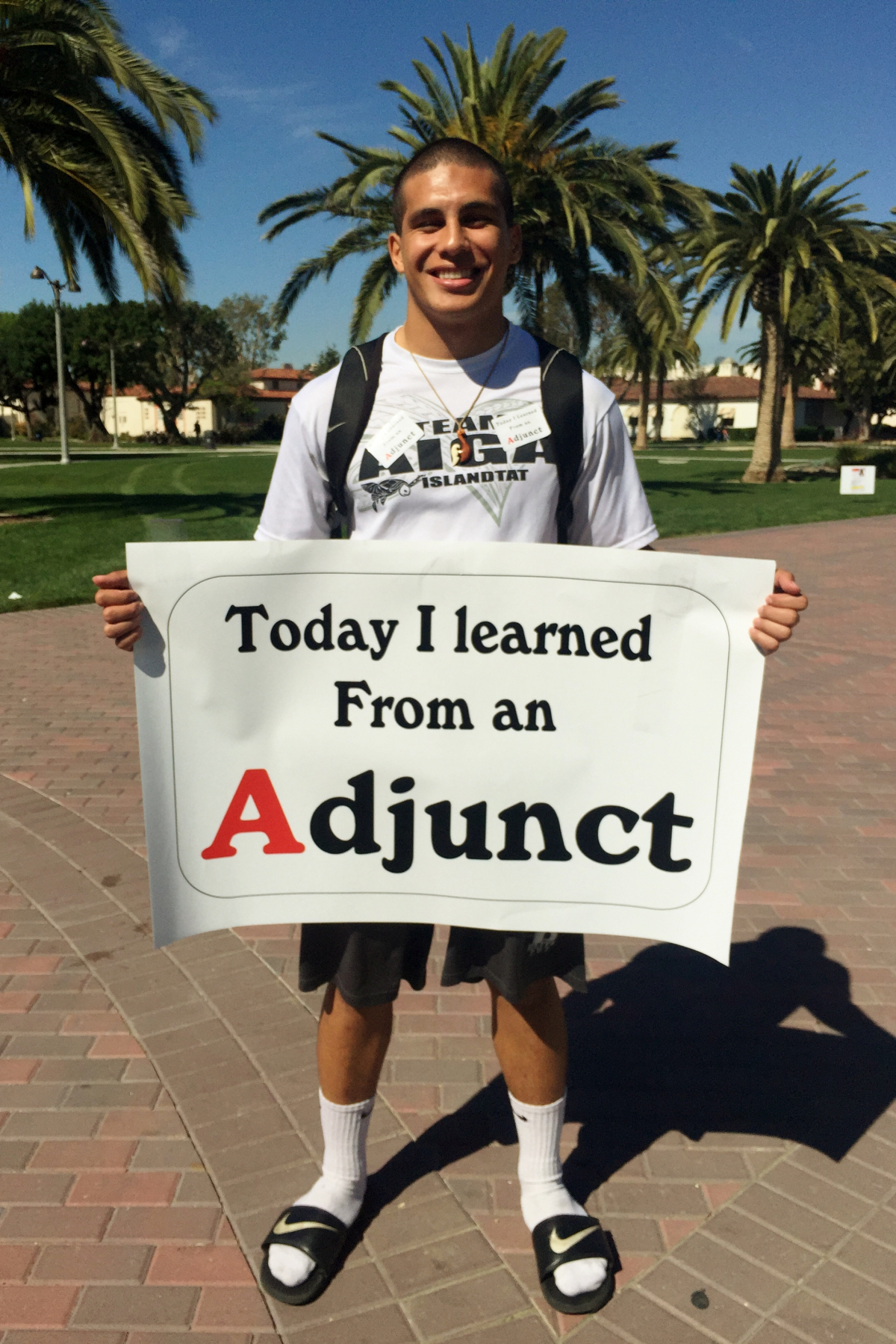 Long Beach City College freshman football player London Iakopo showed his support for National Adjunct Awareness and Walkout Day February 25. The college's president gets paid more than Joe Biden—while the adjuncts who do most of the teaching try to scrape by on $10,000 a year. Photo: Vivian J. Malauulu.

At Long Beach City College—like most colleges and universities these days—the adjuncts who do most of the teaching earn poverty wages and never know if they’ll even have a job next semester. But that problem wasn’t on the board of trustees’ agenda this week.

Instead the board addressed the job security of superintendent-president Eloy Ortiz Oakley. He already had a contract through 2017—but at his urging they agreed to extend it further, to 2019.

This kind of professional disregard toward the concerns of the staff is just one of the reasons why frustrated faculty on February 25 joined the first-ever National Adjunct Awareness and Walkout Day.

The "mock" walkout was held midday on a busy outdoor walkway on the Southern California campus. Full- and part-time instructors handed out fliers and stickers to passersby: “Adjunct Ally" and "Today I Learned from an Adjunct.”

Joining them was Trustee Sunny Zia, the single “nay” vote against Oakley’s contract extension. “I voted no because I believe we have more imminent issues to address,” Zia said, “such as chronic low morale and transparency.”

Locally, the event was sponsored by Certificated Hourly Instructors (CHI), the union that represents the 700 part-time faculty at LBCC, where I teach journalism part time. Our 300 permanent, full-time colleagues are unionized separately.

"Just to be clear, CHI cannot encourage part-time faculty to walk out," an action that’s legally permitted only when contract negotiations are at impasse, CHI President Karen Roberts explained in a newsletter to members. Hence the "mock" walkout.

The purpose, Roberts wrote, was to “bring awareness to our students about the disparity that exists between full and part-time faculty at LBCC and the effect it has on their learning conditions.”

Thousands of part-time professors from hundreds of institutions participated in the national day of action—part of a recent wave of contingent faculty organizing by the Steelworkers (USW), Service Employees (SEIU), Teachers (AFT), Education Association (NEA), University Professors (AAUP), and the Newspaper Guild/Communications Workers (CWA), among other unions.

Numerous unions and union-hopefuls organized events, and some held actual walkouts. Students and community supporters joined many of the picket lines. There’s a map of participating institutions on the National Adjunct Walkout Day Facebook page.

The idea of a nationally coordinated action day started as an email outcry after the death of Margaret Mary Vojtko, who taught French at Duquesne University for more than 25 years. At times she was homeless and she often went without medication for her cancer. She died at age 83, broke and without health insurance.

Adjunct faculty, now the majority of higher-ed instructors, are a far cry from the conventional image of college professors as calm sophisticates with dream schedules and permanent assignments.

In reality, adjuncts have no guarantee of continued employment from day to day. Even weeks into the term, an administrator may determine that an adjunct’s class is expendable—and the part timer is suddenly out of a job.

They have to reapply for their teaching assignments each semester. Most have no seniority rights, no allotment or compensation for office hours, and no health or retirement benefits. Schedules and even curricula are often assigned without negotiation.

She estimates that after prep time, grading student work, responding to emails, and meeting with students before and after class, most adjuncts earn about $2 per hour, with no health care, retirement options, or job security.

"Most students don't even know that they are being taught by part-time faculty who do not earn a living wage," said Frye. "It is important for them to understand that our working conditions equal their learning conditions."

The average adjunct earns less than $2,000 per course he teaches, per semester. If an adjunct is lucky enough to teach four classes per semester, two semesters per year (sometimes at separate colleges), his annual earnings could roughly be $16,000.

And if he's using the health benefits plan recently offered to LBCC adjuncts, he’s probably paying $500 per month, deducted from his paycheck—bringing his annual teaching income down to $10,000. That meager salary can’t be expected to cover a mortgage, living expenses, and the student loans that many still owe for their degrees.

An adjunct's “office” is usually his car; his backpack serves as his desk and file cabinet. He is not paid to hold office hours for students. A belittling nickname, “Freeway Flyers,” refers to the hectic experience of commuting between colleges, since many part-time instructors are forced to work multiple jobs to make ends meet.

Some tutor, or work retail or service jobs on the side. Many must rely on unemployment, food stamps, or welfare to make ends meet.

By comparison, a full-time professor's monthly salary for teaching the same four classes per semester is upwards of $8,000—factoring in office hours, professional development, and faculty meetings. Additional benefits include tenure, fully-paid health benefits, the possibility of sabbatical leaves, healthy retirement options, and the peace of mind knowing he’ll have a job next year.

Last summer LBCC hired 42 new full-time professors—but that’s still far from enough. The college had been fined millions of dollars by the state for being out of compliance with its faculty-student ratio. That’s the only reason why so many full timers were hired so quickly.

Before the findings, administrators had claimed the budget prevented them from hiring more full-time faculty. Yet in recent years, LBCC has almost tripled its number of administrators, while student enrollment stayed steady.

No wonder morale is low among full- and part-time faculty alike. Yet ask the typical adjunct why he continues to do this, and he’ll exclaim that he loves teaching.

Like their full-time counterparts, adjuncts have qualifying education or industry experience. Many have advanced degrees and many engage in publishing or research in their field.

"Part-time faculty is the backbone of the community college," said Dr. Lynn Shaw, a tenured professor of electrical technology and president of the Community College Association, which represents full-time faculty. "They are under-appreciated and underpaid. Students deserve better access to their teachers."

Related
School and Campus Workers Say: Not Until It's Safe »
Graduate Employees at University of Michigan Strike over COVID, Police »
Undergrad Workers Organize Wall-to-Wall at Kenyon College »
We Reinvigorated Our Undergrad Union… Just in Time for COVID Fights »
Our Faculty Union Exposed the University's Debt—And Who's Paying for It »