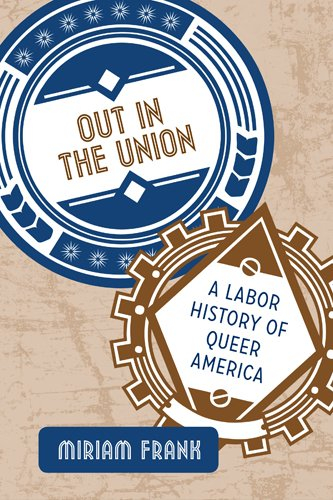 Out in the Union: A Labor History of Queer America, by Miriam Frank, Temple University Press, 2014.

The comprehensive new history Out in the Union: A Labor History of Queer America reveals previously uncollected stories of lesbian, gay, bisexual, transgender, and queer labor activists and activism for LGBTQ equality.

Author Miriam Frank, a master teacher of humanities at New York University, identifies the little-known milestones that have together defined queer labor organizing, both inside and outside unions, from 1965 to the present. Those milestones: coming out in the union, gaining nondiscrimination clauses in contracts, and overcoming obstacles between LGBTQ and straight workers to forge alliances.

In the 1930s and ’40s, the Marine Cooks and Steward union became likely the first to welcome and encourage a racially and sexually diverse leadership, reflecting its workforce. But that move in its time was rare and radical.

In Out in the Union, we learn about labor activists in the second half of the century who were in the closet or went through a (sometimes involuntary) coming-out process. Their fights for leadership roles in their unions were difficult. Some faced ugly anti-gay opposition and smear campaigns, but ultimately won out—relying on their records of success fighting for other workers.

These new union leaders did not, at least at first, typically fight for LGBTQ inclusion in contracts or at the national union level. As time went on, though, those who took leadership roles began working to push their unions forward into a new era of recognized racial, sexual, and gender diversity.

Frank considers the fights for nondiscrimination clauses in union contracts and constitutions to be the cornerstones of LGBTQ worker rights. These protections were especially important for workers in states without anti-discrimination laws—still the majority of U.S. states.

The protections never came automatically. Her research provides numerous examples of how workers gained them.

James Mitchell, a gay teacher from New York, introduced a gay rights resolution at the 1969 American Federation of Teachers convention. It was defeated by a vote within the human rights committee, and never made it to the convention floor. But the matter was referred to the union’s executive council, which in 1970 released what was considered a more watered-down resolution, stating that the AFT would “protest any personnel actions against any teacher solely because he or she practices homosexual behavior in private life.” At the time, it was still an extraordinary affirmation.

In 1985, workers at Columbia University negotiated a contract including sexual orientation protection—costing the university nothing, as long as it didn’t discriminate. From that point on at Columbia, the negotiating committee was able to fight incrementally for additional protections and benefits, such as inclusive health insurance and bereavement leave.

For years LGBTQ labor activists were isolated and disconnected from one another. But the culmination of decades of experiences was a groundbreaking 1990 organizing handbook called Pride at Work: Organizing for Lesbian and Gay Rights in Unions, featuring accounts of union-based AIDS work and union-negotiated domestic partner benefits.

The book began building coalitions and sharing resources. Groups formed, and the name stuck. In 1997, Pride at Work was first recognized as an official constituency group of the AFL-CIO. It became the organizing center for LGBTQ labor issues, with local chapters around the country.

With so much shared history, what can we learn from instances of labor support (or lack thereof) for the political struggle for LGBTQ rights? The book details some of the major coalition work between unions and LGBTQ groups at local, state, and national levels—both wins and losses.

Beginning in the late 1970s, conservative groups led a series of “Save Our Children” campaigns to overturn municipal non-discrimination clauses and ban gay teachers. In 1977, unions stood by as the Miami-Dade County, Florida, non-discrimination ordinance was repealed by popular vote.

As LGBTQ workers began coming out, getting elected to leadership roles, and fighting for reform from within, many of America’s unions transformed. Recently unions have been key players in state marriage equality fights.

As a queer labor activist, I appreciate the hard work documented in Out in the Union. Most histories tend to “heterowash” any LGBTQ person’s truth—if their stories are told at all. This significant book uncovers the truths too often hidden away, adding the experiences of many LGBTQ leaders to labor’s collective history.

These stories are essential to a contemporary understanding of union solidarity. We should draw on the examples in Out in the Union as we fight for economic justice for workers of all backgrounds.

Kate Ekman is president of Pride at Work Chicago and membership coordinator at UNITE HERE Local 1.

Related
A Candid Conversation About Queers in the Labor Movement with Longtime Union Activists Miriam Frank and Desma Holcomb »
Three Bold Moves Our Movement Must Embrace in the Wake of the Landmark LGBTQ Supreme Court Decision »
Fifty Years after Stonewall: LGBTQ Workers Seek Equality »
George H.W. Bush: Not So Civil After All »
Out of the Closet: A Sanitation Worker Fights Discrimination »