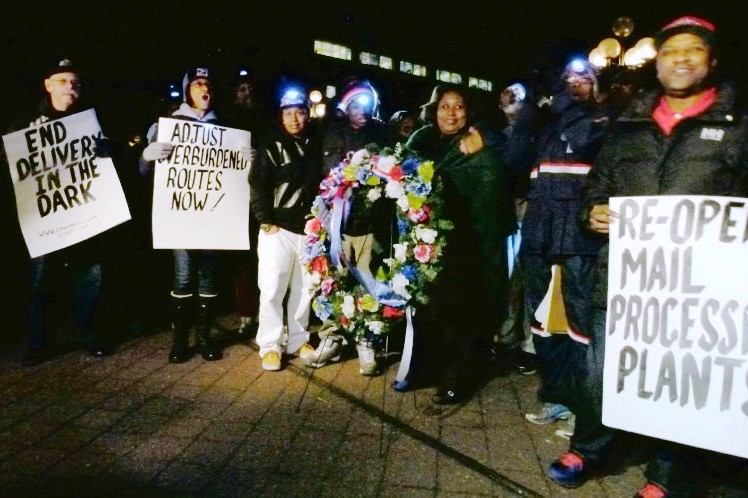 A Martin Luther King, Jr. Day march in Washington, D.C. brought together postal workers and family members of 26-year-old letter carrier Tyson Jerome Barnette, who was shot and killed while delivering mail in the dark in Landover, Maryland, in November.

USPS hasn’t released figures on how many deliveries take place in the dark—but it does track how many carriers finish their routes after 5 p.m. In a recent report, this figure hit 43 percent—the highest yet, nearly half of all carriers—for the latest month reported, September 2013. Compare that to five years earlier, when fewer than 20 percent of letter carriers got back so late.

“Twenty years ago, the only time you would ever work in the dark would probably be in late December, if something went wrong,” said Joe Piette, a recently-retired Philadelphia letter carrier who’s still a postal activist. “Maybe if a lot of carriers were out sick, you might be persuaded to do overtime on another route… Today it’s much more common.”

Many letter carriers attending the march wore headlamps or carried flashlights they’d bought at their own expense to cope with the nighttime work.

Seven members of Barnette’s family made the 425-mile trip from South Carolina to take part in the rally. Bridget Barnette explained she didn’t want what happened to her son to happen to another letter carrier.

Nearly half the mail processing plants in the country have closed down over the past two years. Now mail is trucked hundreds of miles out of its way to be sorted, and the remaining plants are overwhelmed with the deluge—creating a cascade of delays. That means many letter carriers, who once started their routes at 6 a.m., now can’t get started until 9 or 10. Even with an eight-hour shift, they finish after sundown.

That’s partly because many routes have too many mailboxes to realistically deliver in eight hours. There are more delivery points and fewer routes than there were a decade ago.

“They’ve overburdened a lot of routes,” Piette said. “There’s no down time. Your day is planned down to the second. If the weather’s bad, or it gets dark—there’s a lot of things that can make your day longer.”

It’s also partly because a hiring freeze has left many routes vacant. Traditionally, most career letter carriers delivered their own regular routes five days a week, explained retired carrier Dave Welsh. The sixth day would be covered by a carrier technician, who got to know the five routes they rotated through every week.

But today, USPS covers the vacant routes piecemeal, in “just in time” fashion. Some carriers are asked to complete their own route, then walk half of another. Many “city carrier assistants” like Barnette—the low-paid, perma-temp tier of carriers—are routinely floated from one unfamiliar route to the next.

“It’s an insane, inefficient system they have,” Welsh said, “because they’re trying to squeeze so much out of the workforce.” Evidently it’s still cheaper for USPS to routinely pay overtime for long shifts than it would be to hire new permanent, benefited employees.

In a resolution calling for an end to delivery in the dark, Portland, Oregon’s Letter Carriers Branch 82 reeled off a list of attacks on the union’s members nationwide. In November alone, besides Barnette’s death, a Florida carrier’s truck was hit by a bullet, a New York carrier was robbed by two men on his route, and in Chicago—where deliveries can go as late as 1 a.m.—six carriers were victims of crimes while on the job.

Police haven’t figured out who shot Barnette. But the story brings to mind other recent tragedies: slain Florida teen Trayvon Martin, killed by a neighborhood vigilante, and Detroit 19-year-old Renisha McBride, killed on a doorstep when she knocked seeking help after a car accident. Like Martin, McBride, and one in five postal workers, Barnette was African American.

After rallying at the King memorial, attendees marched to postal headquarters, where they delivered their demands and laid a flowery wreath in memory of postal workers injured, wounded, or killed on the job.

Correction: This article has been updated to correct the titles of postal jobs: city carrier assistant (not associate) and carrier technician (not substitute).

Alexandra Bradbury is the editor of Labor Notes.al@labornotes.org
Related
Letter Carriers Resist After-Dark Delivery »
Letter Carrier: Air Quality Is a Union Issue »
Gearing Up for Bargaining, Canadian Union Pushes for a Greener, Better Postal Service »
Detroit Postal Workers Push to Dump DeJoy and His Ten-Year Plan »
The Postmaster General’s New Attack on the Mail Is a Fig Leaf for Privatization »