Review: How the Early Flight Attendants Fought Sexism and Homophobia 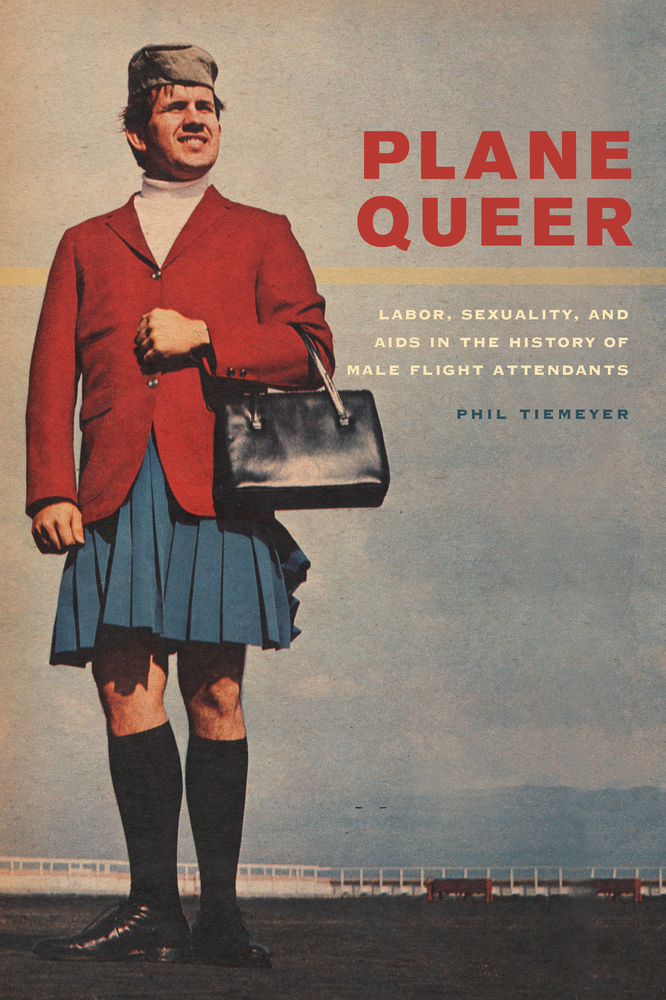 Is it possible to write a history of silences?

The moments of unspoken recognition that passed between gay male flight attendants in the 1950s, for instance. Or the euphemisms shared by airline managers, who seemed to want to reduce the number of gay men in the industry.

Such things were not written down. But can they be unearthed today?

Their stories are compelling, and tell us about aspects of the airline industry that haven’t yet been discussed in writing. But because Tiemeyer mostly leaves their sister flight attendants outside the frame of his discussion, the book feels incomplete.

In airline advertisements of the 1920s and ’30s, white male flight attendants—then called “stewards”—were presented as graceful icons of style. These ads, Tiemeyer argues, were designed to appeal particularly to elite men versed in “gay,” Prohibition-era speakeasy culture. But those relatively permissive early days gave way to an era of more pronounced homophobia, starting with World War II and extending over two decades.

The wartime boom in production of DC-3 planes set up the conditions for a massive post-war expansion of commercial airline travel. Many war planes were decommissioned and auctioned off at low rates to the airlines.

The companies initially hired significant numbers of male veterans as flight attendants. But they changed course after a wave of labor agitation and unionization—particularly among male workers—won increases in flight attendants’ seniority and pension benefits.

The airlines were able to continue imposing restrictive terms on women, including bans on marriage and mandatory retirement at 32 or 35. So it became advantageous to hire more women, who wouldn’t receive as many seniority raises or pension benefits before being forced out.

Also, the expansion in capacity forced airline managers to try for a broader base of customers. They did so by appealing to women consumers, in part by presenting the air cabin as a family-friendly, domestic space, overseen by other women capable of helping with the care of children and with food service.

As Tiemeyer presents the story, these trends coincided in the mid-1950s with a period of particularly virulent homophobia, which brought about the near-total exclusion of men from new flight attendant positions.

He focuses particularly on the aftermath of the 1954 murder of Eastern Airlines flight attendant William Simpson. Upon landing in Miami, it seems Simpson was solicited for sex—by a man who, with an accomplice, robbed and fatally shot him.

The two men presented an argument in court that would later become known as the “gay panic defense”—that Simpson, by making a pass at them, provoked them to panic and kill him. They were ultimately acquitted of murder. Miami newspapers took the occasion to publish a series of phobic exposés on the local underground gay scene.

Tiemeyer attempts to show—in part by interpreting euphemistic or opaque airline management memos and through oral history interviews with former airline managers—that this murder and its aftermath, and similar instances of violence and public scrutiny, contributed to managers’ increasing reluctance to hire men as flight attendants, on the assumption that men applying for the job were more likely to be gay than those applying for other jobs.

By the mid-1960s, the flight attendant workforce was nearly all female. But the ground shifted again over the course of the following decade. Because of mid-century struggles for labor and civil rights, women flight attendants were able to successfully challenge restrictive marriage and early retirement policies.

The expansion of civil rights laws and policies in the late 1960s also laid the groundwork for the suit—brought by male flight attendant applicant Celio Diaz—that in 1971 set a precedent barring the airlines from rejecting men on the grounds of gender.

Tiemeyer spends significant time detailing the legal twists and turns of the Diaz case, presenting it as a turning point for the industry. As he tells it, Diaz allowed a new generation of men, many of them gay, to enter the workforce.

This influx supposedly made it possible, by the mid-’70s, for unions to successfully challenge the low-cut, tight-fitting uniforms female attendants had increasingly been forced to wear. The unions argued that there was no basis for requiring men and women to wear such radically different uniforms.

According to Tiemeyer, the influx of gay men also changed social patterns among airline workers. Women attendants purportedly chose to hang out more with their gay male co-workers than with the mostly straight pilots.

This depiction of how the industry changed during the 1970s is a somewhat unsatisfying part of an otherwise compelling book. Tiemeyer focuses on a particular slice of legal and regulatory changes—those immediately relevant to the Diaz case—and almost totally excludes other dynamics. This means he doesn’t attend to many significant dimensions of the industry’s history, and of flight attendants’ history in particular.

He casts men as protagonists of a story that should include female leads as well.

The late 1960s and early 1970s was a period of powerful labor and feminist organizing among women flight attendants—as historians and sociologists Kathleen Barry, Georgia Nielsen, and Arlie Hochschild have shown.

In the early 1970s, airline firms experienced a sharp drop in profits. They were having trouble consistently filling the seats of their newly-built jumbo jets. A number decided to compete for frequently flying businessmen by forcing women flight attendants to wear increasingly tight-fitting and low-cut outfits, and by making ads that suggested it was normal for passengers to sexually harass flight attendants.

Women fought this attempt to make sexual harassment a normal part of their working lives. Some linked up with national feminist organizations and formed a group called “Stewardesses for Women’s Rights.” When National Airlines forced flight attendants to wear “Fly Me” buttons, members of the group made and wore buttons that read “Go Fly Yourself.”

At this time, flight attendants and pilots were members of combined union locals. By and large, pilots and their union leaders did not respond positively to flight attendants’ organizing against sexual harassment; at times they were actively hostile. This reality spurred groups of flight attendants to form their own unions. By the end of the 1970s, women flight attendants had led successful campaigns to establish locals independent of the pilots—enabling them, and their male attendant counterparts, to fight more effectively to improve their conditions.

By largely ignoring this history, Tiemeyer is unable to do full justice to the story of gay male flight attendants, either.

The 1980s AIDS crisis had a devastating effect on the emerging community of gay male flight attendants. Airlines attempted to ground employees with AIDS. Tiemeyer tells the story of Gär Traynor, who fought a public campaign against United Airlines in response to his grounding—then went on to help build a broader movement in response to the AIDS crisis.

Traynor participated in one of the first national convergences of people with AIDS, in Denver in1983. Participants drafted a set of principles outlining how AIDS service providers and others responding to the crisis should relate to people with AIDS, and how people with AIDS should be in leadership positions in all such efforts.

Through his public protest of United Airlines’ grounding him, Traynor helped spark broader protest against employers’ discrimination against people with AIDS.

Flight attendant union leaders helped Traynor and others with AIDS challenge discriminatory treatment. Tiemeyer quotes Patricia Friend, who was in charge of grievances for the Association of Flight Attendants in the early 1980s: “There was never any question in our mind what we were going to do, because this was discrimination. And we have fought through our careers and through our history every kind of discrimination that you can think of…. It just wasn’t open for discussion.”

Plane Queer made me curious about the histories of struggle and solidarity shared between women and gay male flight attendants. What made Patricia Friend and other union activists feel the imperative to organize against homophobic and AIDS-phobic discrimination? What forms of care and support had such workers shared—perhaps sometimes without words—over the course of the 1970s and early 1980s? What tensions did they face in their interactions? How did women and gay male flight attendants forge a new politics together?

This history of solidarity might have something to say to today’s labor activists struggling against sexism and LBGT discrimination on the job.

Matthew Armstrong-Price is a graduate student worker at UC Berkeley. He is a member of Academic Workers for a Democratic Union and is on the bargaining team for the UC Student-Workers Union (United Auto Workers Local 2865).

Related
Collectively Fabulous »
'We Took Care of Each Other': A Maritime Union's Hidden History of Gay-Straight and Interracial Solidarity »
For Pride Month, Here’s Your Definitive Reading List on Queerness and Work »
Duke University Press Workers Organize with NewsGuild »
A Special Message from Sara Nelson about Why Labor Notes Matters »