One Nation: Unions Can Still Turn Out 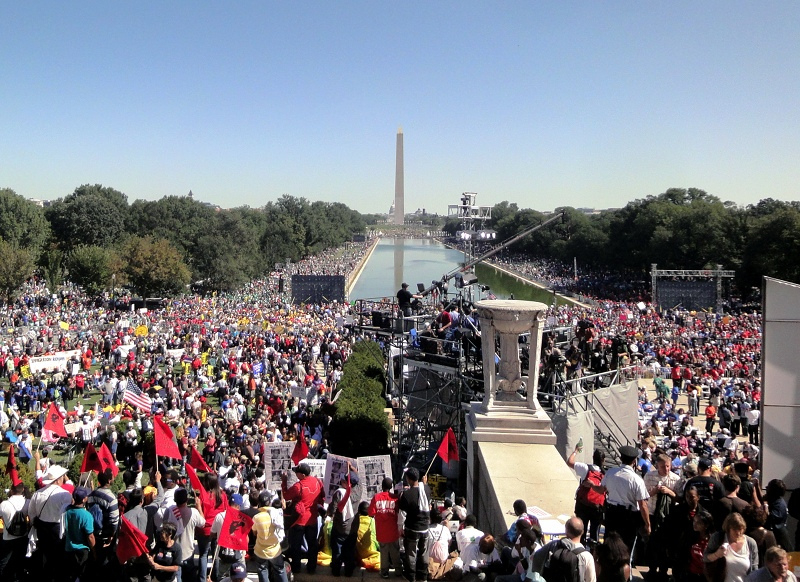 Saturday’s One Nation rally on the Mall in Washington, D.C. proved one important point: unions can still turn out. The big question is whether it will be the launching pad for a more challenging relationship with labor's “friends in Washington.” Photo: Jed Sullivan.

Some may scoff, that’s what unions are supposed to do, but there’s a sense of promise in proving it once again. If a reinvigorated progressive majority is going to happen, unions, despite the years of bad news and falling numbers, will be a mainstay.

The big question is whether union leaders will use the gas left in the tank after October 2 just to get back to Washington and play another hand of parlor politics. The willingness of members to answer the union call can be used as a bargaining chip with the Democrats, wrangling an appointment here and a favorable ruling there, or it could be the launching pad for a more challenging relationship with their “friends in Washington.”

One Nation organizers should be commended for one thing: there were few celebrities on the stage Saturday. This wasn’t a Hollywood rally. Union people, faith leaders, unemployed folks were up there telling their stories.

But the stories stuck to a familiar script, one that always seemed to trail back to getting out the vote in November. And that wasn’t good enough for a lot of members out in the crowd. Some were wondering, what about the last two years?

“We’re the schmucks who spent two years getting cards signed for EFCA,” one CWAer told us, referring to the Employee Free Choice Act that was quietly shelved this year. “No one bothered to tell us that it wasn’t going to happen.”

While active members like that telephone worker still wait for an honest assessment from their unions of why their efforts didn’t produce the change they wanted—on EFCA, jobs, health care reform, immigration--the leadership is doing its best to keep the focus on how terrible the Republicans are. They’re not wrong, but you can only argue the negatives for so long. What will be labor’s return on its $100 million spent on the Dems this year?

After all, money and person-power in elections and shows of strength like One Nation are not unions’ only levers of power. There’s also action vs. employers, when we take them on on the picket line or on the shop floor. It’s that third kind of power that actually disrupts the smooth running of the machine, and it hasn’t been on display much recently. Marie Nelson, a CWA 1105 member at Verizon, said, "We can't just come here for a one-day event. It has to be a consistent cadence: We're here and make this world run. You're going to have to deal with us."

One Nation’s message, coming together, not pulling apart, hit the right note for these divisive times. But that doesn’t get to who got us into the mess, who’s to blame, who’s going to get us out. Labor shouldn’t punt on that question.

Union leaders prefer to play the air war—cutting TV ads for YouTube clips—but that sidesteps the hard work of creating local unions that are motors for movement—communities where people engage each other and argue about what to make of the world around them. Unions were stronger when we fought our natural enemies in the economic realm, rather than simply collecting money for political ends.

When that capacity to take on employers is rebuilt, labor will be far more than its checkbook or its numbers at a rally. But that assertiveness is a scary thought for the people in power who say they’re our friends.

Mark Brenner is the former director of Labor Notes and is currently an instructor at the University of Oregon's Labor Education & Research Center.
Related
Viewpoint: This Election Shows Labor's Ground Game Matters (Especially During a Pandemic) »
Here's How to Join Labor's Anti-Coup Network »
How to Fight a Coup: The Role of the Workers’ Movement »
Teamster Tackles Corporate Democrat in California Assembly Race »
Tax Act: Massive Giveaway to the Rich »

Mark Bremmer raises some valid concerns, but gearing up the labor movement for the elections would seem the critical next step. After all, it was only a month or so ago that Glenn Beck was at the same Lincoln Memorial with a substantial crowd of Tea Party supporters, advocating the more or less permanent undoing of everything progressive.

The One Nation rally was a solid counter to Beck, but the train for the next couple years still leaves the station November 2nd. If we fail to mobilize for the elections, we will have completed our squandering of the best opportunity in decades to strip the broader right wing of its grip on power and most likely allowed in an austerity government bent on destroying whatever is still left standing for working people.