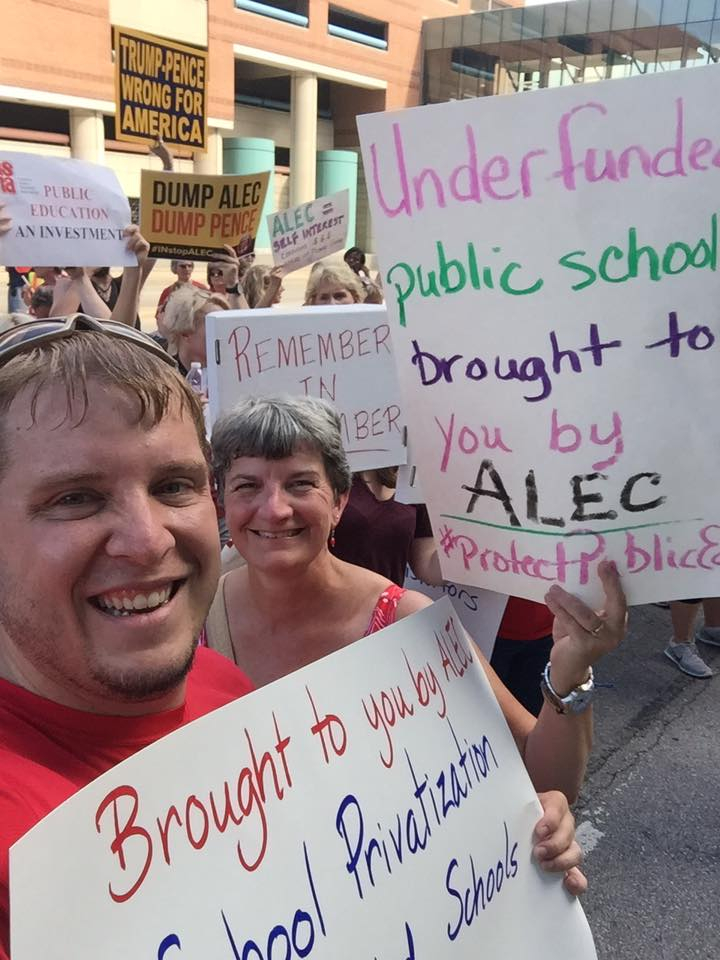 All 300 locals of the Indiana teachers union have moved to bank draft in the face of threats from the Republican-dominated legislature to outlaw dues deduction. Photo: Nick Atkins.

Employers are always looking for sources of leverage. One way they may hit a union in the wallet is by targeting dues checkoff—an agreement that requires the employer to deduct dues from union members’ paychecks.

Anti-union politicians have already banned dues checkoff for public sector union members in Wisconsin and for teachers in Alabama and Michigan—and have threatened to do so in many more states, including Indiana, Tennessee, Nebraska, and Pennsylvania. Their goal is to make the administration of the union as cumbersome as possible, sapping time and energy.

Rather than let employers and politicians dangle this sword over them indefinitely, a few unions have chosen to take the matter into their own hands, ditching checkoff in favor of collecting dues themselves. The most common method is to have members voluntarily agree to allow the union to transfer funds from their bank accounts.

Other unions, such as Tennessee’s United Campus Workers, never had checkoff as an option to begin with. Here are some lessons from three unions that don’t rely on the boss to collect their dues.

Massachusetts hospitals underwent a series of large mergers towards the end of the 1990s. Seeing the trend, the Massachusetts Nurses Association set out to establish common standards across every workplace.

The union lined up contract expiration dates for the year 2000, built towards a credible strike threat, and studied the employer’s playbook.

In the private sector, checkoff is a part of nearly all collective bargaining agreements. But for decades, when the contract expired, so did the employer’s obligation to collect union dues. (The Labor Board overturned this longstanding precedent in 2015, but it could soon be reversed again by the Trump Labor Board.) Many employers used this threat as a source of leverage.

“We knew that if we went beyond the contract expiration date and were building to a strike vote, then the employer would shut off dues deduction and our ability to be well-resourced in a fight,” said Julie Pinkham, MNA’s executive director.

So the union wove a “Union Direct” education campaign into its contract campaign. Activists talked one on one with their co-workers, asking members to make the switch if they were serious about raising standards and winning a better contract.

Through this campaign, 35 percent of members switched to bank draft. The union also won some of the model language it was fighting for across units, such as successor language protecting the contract in the event of a merger or sale.

One of the talking points that resonated most with nurses was that dues should be a relationship between a union and its members, not the union and the boss. “Saying ‘We let the boss collect our dues’ out loud, it just sounds stupid!” Pinkham said.

To get the remaining nurses on board, the union employed a “carrot and stick” strategy.

Members who opted for bank draft got a $35 rebate on their dues for the year. Those who didn’t were charged a fee of a dollar a week, since the union has to spend time reviewing monthly spreadsheets line by line to make sure the employer is correctly deducting dues.

“We got to 75 percent pretty quickly as a result of that,” said Pinkham—and the union has maintained that level ever since.

The Republican-dominated Indiana legislature has been threatening to outlaw dues deduction for years. After seeing teachers lose it in Alabama and Arizona over the past several years (though they eventually won it back in Arizona), leaders of the Indiana teachers union decided to take the threat off the table.

To work out the kinks, the union started in 2013 with a trial campaign in a handful of locals, then expanded from there. It took four years to get all 300 locals moved to bank draft.

Union staff worked with local leaders to come up with a plan to talk to every member, connecting the change to members’ anger at legislative anti-teacher attacks.

“We were worried some people were going to drop their membership,” said Sue Ellen Sopher, president of the Maconaquah Education Association. “When money was coming out of their paycheck, many people didn’t notice it. When it comes out of your bank account, you do.”

“A lot of the plan focused on how we approached the organizing conversations,” said Heidi Miller, a staffer for the Indiana State Teachers Association. “We talked about how making the switch was going to cut the legs out from under our enemies because they couldn’t threaten to take away dues deduction anymore.”

Some locals, including Maconaquah, got to 100 percent bank draft. According to Sopher, what made the difference was setting a strong tone—local leaders making it clear that everyone was expected to move over. Locals that set a more lax tone had more holdouts.

“If you give people an option to opt out, then they will,” said Sopher.

UCW, a non-majority union that represents employees at the state’s public universities and colleges, has survived in such a restrictive right-to-work environment by constantly organizing around the issues that members care about, such as blocking attempts to privatize their jobs. The union steers clear of talking about membership as an exchange of services or something that members buy.

Don’t Switch for the Wrong Reason

Here’s one thing you should not say: “An added benefit of switching to bank draft is that the boss won’t know you’re a union member!”

That mindset won’t build a strong union. You’re only as powerful as you are ready to take action together—and you have to be willing to let the boss know it.

If a tree falls in the forest and nobody hears it, the boss doesn’t budge.

Dues provide the resources you need to fight on the issues that matter. But a fight requires more than money—it also requires fighters.

If the union is weak, members may be justifiably afraid that they’ll be targeted for union activity. The solution is to build a sense of safety and strength in numbers. Get members together to address workplace problems by taking action publicly, as a group.

“We don’t have collective bargaining, but we are organizing a group of people to come together and fight,” said Dana Smith, UCW middle-Tennessee organizer. “That requires folks to join, be a member, and help us pool resources through dues.”

When members join, they have several dues options. They can sign up for bank draft, which is the preferred method, or they can pay by check for a minimum of six months at a time. They can also sign up to have their debit or credit card billed monthly.

One significant drawback of using bank draft is the danger of overdrafting funds, especially for low-wage workers. The union pulls dues at the same time every month so that members know when to expect it and budget accordingly. But occasionally an account is still overdrawn.

When this happens, the union puts the member’s account on hold until a UCW staffer or rank-and-file leader can get in touch.

“We work with them to come up with a plan,” said Thelma Jean Rimmer, a custodian at the University of Memphis. “This can mean coming up with dates for when money can be drawn so they can pay their overdraft charge and their dues without overdrafting again or going broke.”

Many in the UCW say that dues deduction would be preferable—but the experience of the Texas State Employees Union, a sister CWA local, exposes how politically precarious dues deduction can be. Like the UCW, TSEU is a non-majority union with no collective bargaining rights.

After a 10-year effort, TSEU won legislation in 1991 granting it the right to deduct dues. However, fed up with threats from the state legislature, TSEU is now engaged in a union-wide campaign to move its 10,000 members back to bank draft.