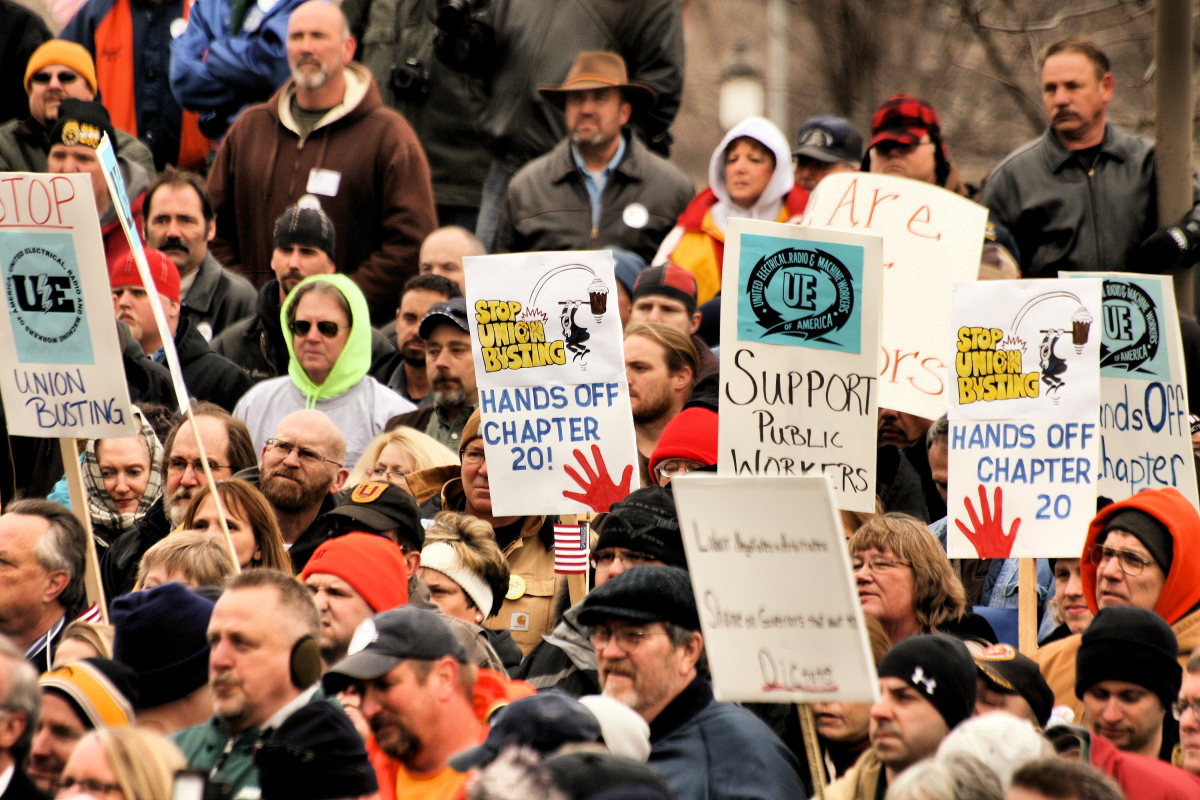 Republicans in both houses of the Iowa state legislature have introduced a bill that is aimed at destroying public sector unions and the rights of public employees in that state.

This legislation is designed to render collective bargaining meaningless by making it illegal to negotiate most of the subjects now covered by contracts, and to cripple unions financially by eliminating the dues checkoff process which union members voluntarily pay to support their union’s activities.

This bill, which Republicans seem determined to ram through in just a few days with almost no debate or public input, is meant to rob 184,000 Iowa public employees of basic labor rights. That includes 6,000 members of our union, the United Electrical Workers (UE).

It would gut the existing state collective bargaining law, Chapter 20, which passed the legislature in 1974 with bipartisan support and was signed into law by a Republican governor. Current Governor Terry Branstad was one of only a handful of Republican members of the legislature who voted against Chapter 20.

Branstad has remained hostile to public employees and their unions throughout his long political career. His dreams of crushing organized labor have been frustrated because, until the recent election, Republicans did not control both houses of the Iowa legislature. Now that they do, he and his followers have launched a blitzkrieg attack on workers.

This bill (House Study Bill 84 and Senate File 213) is the most extreme, outrageous attack on collective bargaining rights we have yet seen. It’s worse than Scott Walker’s 2011 attack on Wisconsin unions. It’s also worse in many ways than public employee laws in North Carolina and Virginia, where voluntary dues deductions and grievance procedures are permitted.

For all public employees except “public safety employees” (police and fire), the bill makes it illegal to negotiate over health care, transfers, job evaluations, procedures for workforce reductions, subcontracting, or anything related to seniority.

Unions will not be permitted to negotiate payroll deduction of union dues, even though Iowa has long been a “right-to-work” state and all employees who sign up to pay dues do so voluntarily. This provision is clearly designed to cut off unions’ operating revenue so that it is difficult for our locals to function. It will go into effect immediately upon passage.

Incredibly, unions will not even be permitted to negotiate grievance procedures to enforce their contracts.

The only topic on which unions will retain bargaining rights is wages. Even then, wage bargaining will be largely meaningless. If the employer and union don’t reach agreement, the dispute will be resolved through binding arbitration, as occurs under current Iowa law. But the new law will allow the arbitrator to grant a wage increase of no more than 3 percent or the percentage increase in the consumer price index, whichever is less.

Meanwhile in Washington state, Republicans have introduced “right to work” and a raft of anti-state employee bills that AFSCME Council 28 has dubbed “The Awful Seven.” A Democratic senator is sponsoring two bills that would prevent school employees from bargaining over their health insurance.

Every union representing public employees will have to win a recertification vote one year before the expiration of each contract. To retain the union, the majority of employees in any bargaining unit—not just a majority of those voting—must vote to retain the union. That’s a standard that neither the governor nor a single member of the legislature could meet in their own elections.

Furthermore, the union must pay the state in advance for the costs of conducting elections, which is yet another attack on union finances.

Our members in Iowa are fighting back. They have besieged their legislators in Des Moines and at events in their districts.

In addition to providing our nine Iowa locals all resources necessary to fight this bill, we and our Iowa leadership are evaluating every option on how to continue the struggle for workers’ rights under what may become much more difficult circumstances. Members deserve and will receive the support of the entire UE.