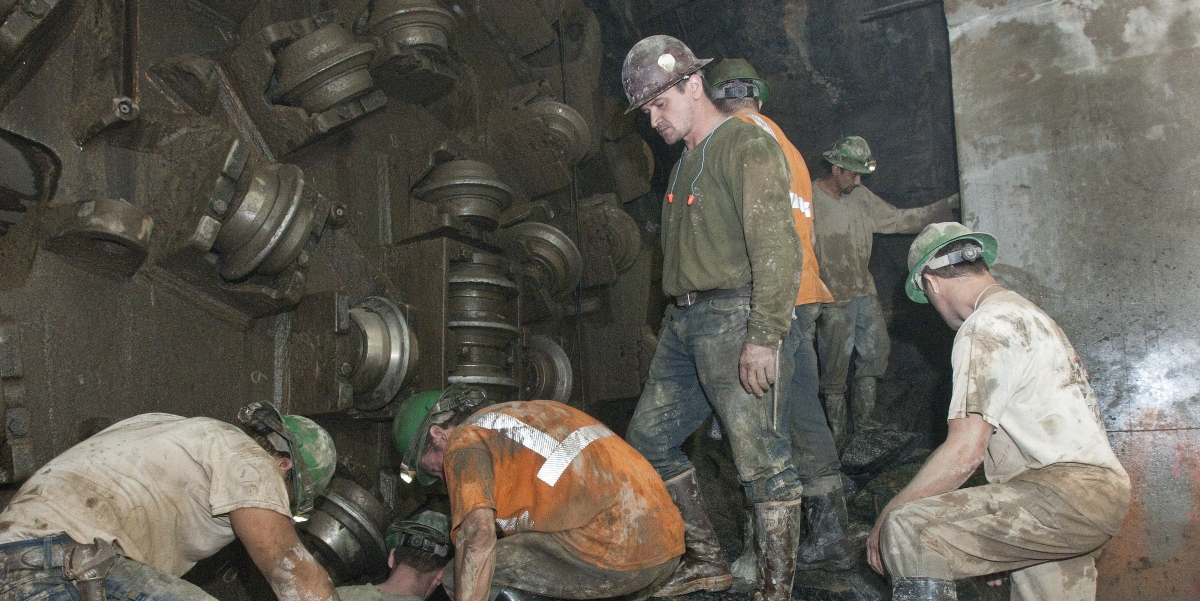 The campaign plays on New Yorkers’ mounting frustrations with a system roiled by delays and overcrowding. It’s part of a volley of attacks on the city’s building trades unions by powerful developers and corporate mouthpieces.

The “Subway Scam” ads are the latest baloney from the Center for Union Facts, a corporate-backed nonprofit devoted to attacking unions. According to recent tax filings, its funders include Long Island hedge fund billionaire Robert Mercer, a major backer of the Trump presidential campaign and right-wing media outlet Breitbart News.

Subway delays have more than doubled in the past five years. Last year a series of New York Times articles dug into the history of neglect of the city’s transit system.

The paper faulted various politicians for starving the transit budget, miring the system in debt, and squandering construction funds on station makeovers instead of maintaining signals and tracks. While New York’s property values have skyrocketed—thanks in part due to subway access—none of the tax revenue from sales has been set aside for transit.

The Times trained its spotlight on the high cost of building new subway lines. New York’s per-mile transit construction costs are the highest in the world, according to the paper.

Part of that is due to the high cost of worker health insurance, which in the U.S. gets rolled into labor costs, unlike in other countries with national health care systems. But the series claimed that only accounted for one-tenth of increased costs.

High-priced consultants were mentioned briefly, along with higher land and insurance costs. New York City also has a higher cost of living than most of the world.

But the investigation zeroed in on union wages, benefits, and supposedly archaic work rules.

The Times painted a picture of overstaffed construction sites where hundreds of unnecessary workers roam around pocketing up to $1,000 a day; where 25 people operate a tunnel boring machine, while cities elsewhere use 10 or fewer; where outdated jobs linger on, like the crane “oiler”—a relic of the days when cranes needed to be manually lubricated.

This image of union bloat is what the new ad campaign plays on.

But workers on the 2nd Avenue Subway project—a particular focus of the Times—say the reported numbers seem inflated.

Surveyor Matt Murphy suggested that perhaps there were 25 total in the hole if you included the surveyors, operators, and workers running the train back and forth with excavated rock, and that 25 might have jumped in for a photo op.

Andy Latosek, a tunnel worker and member of Sandhogs Local 147, says every job he’s been on in his 31-year career, including some brief time at the 2nd Avenue Subway, has had eight or nine people on the boring machine. Each one has a critical job: operating the machine, running the bag line, running air and water lines, maintaining electricity, and placing pre-cast forms around the tunnel.

While the pay scale varies by union and job, tunnel workers generally command a high wage because it’s such dangerous work.

“You’re breathing in bad air, all the time. You’re working in a round circle, so your ankles are gone,” said Latosek. He’s lost half a dozen co-workers in his career, and remembers many near misses where blasted rock or a large boulder almost crushed someone.

“Any tunnel, you have no idea what’s going to happen,” he said. “The drills go up into the rock, you don’t know if it’s going to fall down on you.”

Contractors often have trouble finding enough people willing to do the work, even at high pay. Latosek said they normally take a new hire to look down the hole before orientation: “Two out of three people look down the hole and say the hell with it.”

As for crane “oilers,” the only relic is the name itself. Oilers are responsible for fixing anything that goes wrong on a crane, usually the most expensive piece of equipment on the job, and must know basic electrical, piping, and welding. If the crane goes down, everyone is sent home.

Oilers are also responsible for assembling and “jumping” or raising cranes, often very dangerous work. Operating engineers spend time training first as oilers, learning everything about the crane and how to fix it, before being entrusted to operate it.

The developer, Related, recently filed a lawsuit against the Building and Construction Trades Council of Greater New York, claiming the costs on Phase I of Hudson Yards had been inflated by more than $100 million over the past six years. Like the Times articles, the suit cites work rules and staffing for driving up costs.

Related wants to use an “open shop” or “merit shop” on Phase II of the development—meaning the developer would pick which pieces of the project to use union labor and nonunion labor. This model is an attempt to pit unions against each other, allowing developers to reward unions that give more concessions and punish those that fight workplace and safety violations.

Most if not all the work rules and staffing choices mentioned in the lawsuit are tied directly to worker safety and union jobsite standards. The media has focused on one job in particular: the “coffee boy” who’s paid $42 an hour.

On most jobs, apprentices making anywhere between $11 and $25 an hour typically take coffee orders. Concrete high-rise jobs are the exception.

These jobs typically have 100-200 workers out in the elements, up on top of a new building rising out of the ground. Prepping food, coffee, water, and Gatorade and taking everything up to these workers by hand—including up ladders and staircases—is no light-duty job.

Dehydration and heatstroke are serious threats; breaks for water and food are very important. And the alternative to the “coffee boy” is impractical—having a couple hundred workers go downstairs and come back up could take an hour.

Building trades members are fighting to keep Hudson Yards a union job, and to avoid setting a dangerous precedent for the types of jobs that can now be built with non-union workers.

As part of the #CountMeIn campaign, every Thursday since October, building trades members meet up at 6 a.m. outside Hudson Yards to protest. These militant and energetic rallies can draw upwards of 1,000 workers from all trades, many on their way to work at Hudson Yards.

The campaign was born out of a grassroots Facebook group called “Union Building Trades of NYC,” started in 2015 by rank and filers. The group has since grown to include more than 12,000 members.

Some workers are taking the lawsuit as a sign that Related is weak, and that the company is retaliating in an effort to turn down the #CountMeIn heat.

Two large “Subway Scam” billboards look out over midtown Manhattan. But a week after they went up, the Building and Construction Trades Council put up a billboard of a different sort eight blocks to the south, displaying the slogan “New York City is a UNION TOWN! #CountMeIn.” On April 4, more than 10,000 building trades members rallied underneath it.

Laura Gabby is a carpenter and elected delegate in Carpenters Local 157.

Thank you for this valuable response to the New York Times's huge series of articles about the NYC subways, including their reporting about the cost overruns -- which are typical of the MTA. I have to say that no one except you actually bothered to talk to the workers who are cited in the article for inflating costs due to "low show" jobs. Amid all the outcry and interest in this very "sexy" New York topic, no one actually went onto the metaphorical shop floor, except you. The NYT may have sent their photographers to look at the amazing tunneling job our building trades professionals have done -- but their reporters didn't talk to the workers. Hats off to you for bringing some worker views to the claims of outsized salaries and "low-show" jobs.