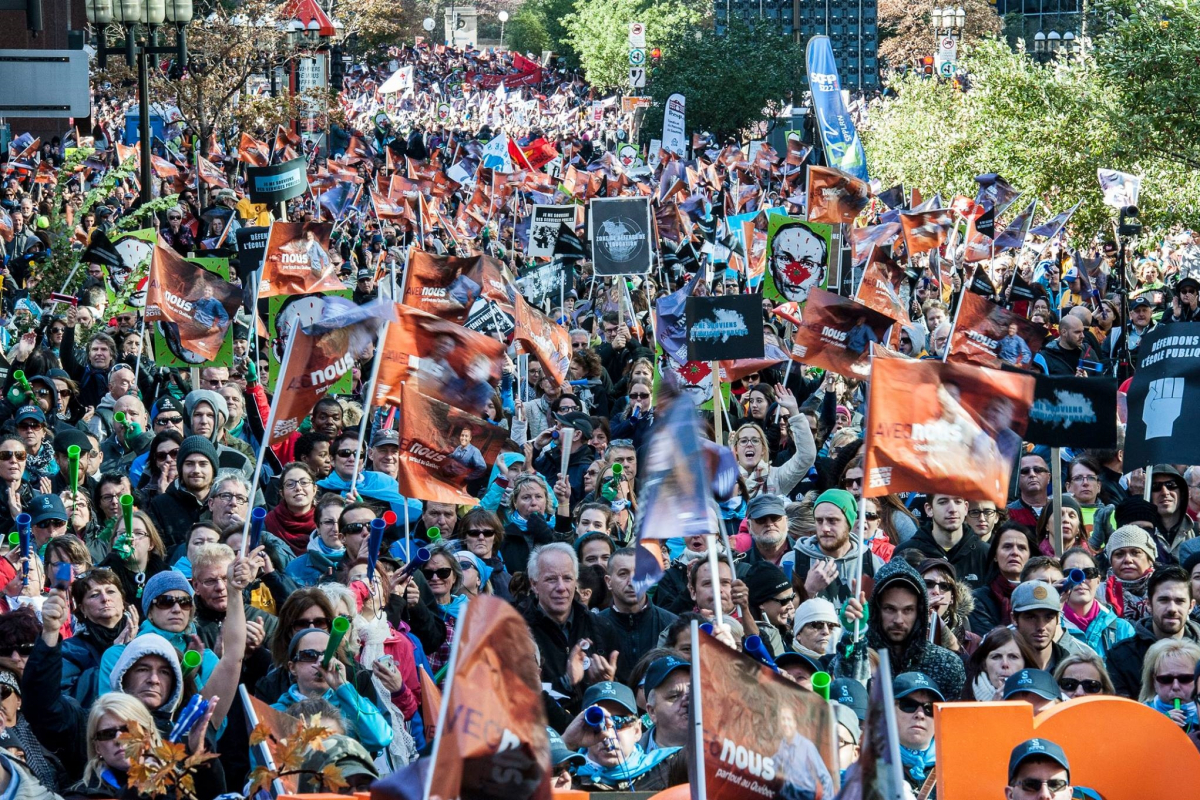 After provincial bargaining stalled, 400,000 public sector workers across Quebec walked out in October and November on rolling one-day strikes.

The government is proposing pension cuts and only a 3 percent salary increase over five years. Since coming to power in April 2014 it has already begun cuts to services, including slashing health and education funding.

The Common Front, a coalition of Quebec public sector unions, is coordinating the strikes, which include teachers, health care workers, and government employees. Members voted to authorize six days of strikes per union. These began with one-day strikes, staggered by region. The Common Front vowed that if no agreement was reached, all members would strike at the same time December 1-3.

Labor Notes interviewed Benoit Renaud and Philippe de Grosbois, who have both been on strike. Renaud is an adult education teacher in the city of Gatineau and a member of the La Fédération Autonome de L’enseignement. de Grosbois teaches in a pre-college program in Laval and is an executive of his local, which is part of the Confédération des Syndicats Nationaux.

At the time of the interview, a December general strike was still planned. However, the Common Front recently announced it's postponing the strike while negotiations continue.

Labor Notes: Teachers kicked off this wave of mobilizations, and overwhelmingly supported strike votes. What issues are they facing?

Renaud: When the government presented their offers back in December [2014] they demanded a worsening of our working conditions on all fronts. They basically asked teachers to work more hours, work more years before retiring, and accept more students in each class.

It really angered all the teachers. It’s as if they are trying to roll back all the little gains that we have won over decades of negotiations. So we have no choice but to fight back.

And it’s not just teachers. Can you describe the human-chain actions parents have been organizing? Quebec union and student union leaders spoke at a Burlington, Vermont forum: Their Fight Is Our Fight! Lessons from the Labor Struggle in Quebec. Photo courtesy of Travon Leyshon. Get your Troublemakers Union gear here.

Parents and their children, and people in the community, go to their local school on the first working day of the month between 7:30 a.m. and 8 a.m. They make a circle and join hands around the school in a symbolic gesture to show that the school is an important institution in the neighborhood and that it needs to be taken care of.

They started in June and now they are at something like 300 schools. So that’s really quite impressive. It shows that the concern for our public school system is not just being brought up by teachers and workers inside the schools, but it’s also being brought up by parents and even children.

That really undermines attempts to say that teachers are just fighting for their own conditions or that they’re going to ruin one semester for the students.

Coming back to the strikes, how did this coordination across public sector unions start?

de Grosbois: Almost all of our collective agreements expire on the same date. So it’s been a practice for a long time to have those negotiations at the same time for everyone.

Renaud: It started in the mid-1960s after the Quebec government took over the health care and education systems and all kinds of other public services which had been managed by private organizations up to that point, most of them owned by the Catholic Church. In the process people who all had different employers before, ended up all having the same employer.

One of the main fights in that period was to have the right to strike, and the other one was to have centralized bargaining—so that teachers all across Quebec, for example, would have the same wages and working conditions. Up to the mid-’60s it was all over the place, it was a big mess.

Is the government putting forward the same package of demands to all these sectors?

de Grosbois: We know from talking to other workers that the government is working on a very coordinated plan. For example, in the summer, on the very same day, the negotiators from the government all came with a new document saying, “We’re going to give you these minor adjustments.”

Renaud: Really what it comes down to is that the government is presenting its budget goals as completely non-negotiable. They’re saying, “We have a finite amount of money for all those services, so if you want something, you have to give us something else to compensate.”

Basically they are telling teachers, if you want to have better wages, then you have to have more students in each class. They are trying to present the entire negotiation as a zero-sum equation.

It’s really frustrating, because the people managing the provincial government and supervising the negotiations all used to work for banks before they became ministers. They don’t have a lot of credibility to tighten our belts when they come from mega-corporations that make billions of dollars of profit every year.

de Grosbois: I think that’s what plays a role in people being mobilized. They are really going against everything that has made Quebec different in terms of public services and social rights.

The Common Front has contested the idea that it’s a zero-sum game by organizing a series of disruptive actions. There was one day in mid-October where a firm called KPMG [an international firm that provides tax advice to corporations] was blocked and occupied for some time.

The Common Front said, “There’s lots of money going to fiscal havens with the help of that firm, so saying that we don’t have money for public services is just not true. If we have the political will to go and get that money, then we would have money for public services—and for other things as well.” The week after, another bank, HSBC, was blocked.

There were also local actions. In my union, for example, 20-30 teachers went into a bank that’s in our neighborhood. The finance minister of our government was the chief economist for a section of that bank. So we went there for 15 minutes and had a class about the political power of banks in Quebec. It was like a flash mob.

That leads us to the general strike planned for December—that’s something we don’t see very often in other parts of Canada and definitely not in the U.S.! What are the possibilities that the government could act to prevent a general strike from happening?

de Grosbois: The government can pass a special law that determines our working conditions for the next few years and forbids new means of pressure or disruption at our workplace, with risks of steep financial penalties. It has been used many times in the last 50 years. The last time, for public sector workers, was in 2005.

I don’t have a crystal ball, but I think if there is a special law it will be later, closer to Christmas. It’s a lot harder to organize and mobilize in that period.

If they were to vote a special law at the end of the November, when people are still very mobilized, there is a much higher risk that it could backfire. Just this week [November 2-3], 1,300 community organizations struck for two days because of cuts in their funding. That’s something that has never been done before. It’s completely new.

Renaud: There is pressure on both sides. The union leaders are afraid of that kind of legislation. It’s tailored to target the top of the union more than the bottom, and the penalties are heavier for disobeying the law.

But on the other side, the government is also afraid to trigger the kind of social movement that took place in 2012 with the student strike. It’s still pretty fresh in people’s memories. If the government tried to force an end to the struggle through legislation, it might actually trigger some kind of broader movement. ASSÉ, the student union that initiated the strike movement is also mobilizing in support of public sector workers.

There must be big tactical debates going on inside the government about how much they want to stick to their position on the overall fiscal framework and maybe risk a lot more trouble than that would be worth. I would be very happy to be a fly on the wall at cabinet meetings these days!

We’ve heard about autonomous strike fund organizing. Is this a moment where rank-and-file members might continue to strike even if there was a special law?

de Grosbois: It’s quite hard to predict, but my feeling is the preparation that this would involve is a lot bigger than we’re ready for right now.

I wouldn’t be surprised if there would be actions to protest the idea of a special law. Just that would be an improvement compared to 2005, where nothing happened except for a press release and going to court and having an answer from the court a few years later.

The 2012 student strike was a very big inspiration in saying these laws can be denounced and protested. But I think we still have a lot of work [to do] in terms of organizing an illegal strike.

Sonia Singh is a staff writer and organizer with Labor Notes.sonia@labornotes.org
Related
Minneapolis Strikers Demand a Living Wage for the Lowest-Paid Educators »
Richmond Educators Are First In Virginia to Win Bargaining Rights »
Twin Cities Teachers and School Employees Gear Up for Strike »
As Omicron Rages, Teachers and Students Fight for Safety Measures in Chicago and Elsewhere »
Teachers Strike against a ‘Heartless’ School Board in Biden’s Hometown »

Franklin D. Roosevelt, who wrote in an Aug. 16, 1937 a letter to Luther Steward, the president of the National Federation of Public Employees"

“All Government employees should realize that the process of collective bargaining, as usually understood, cannot be transplanted into the public service. It has its distinct and insurmountable limitations when applied to public personnel management. The very nature and purposes of Government make it impossible for administrative officials to represent fully or to bind the employer in mutual discussions with Government employee organizations. The employer is the whole people, who speak by means of laws enacted by their representatives in Congress.”

“Since their own services have to do with the functioning of the Government, a strike of public employees manifests nothing less than an intent on their part to prevent or obstruct the operations of Government until their demands are satisfied. Such action, looking toward the paralysis of Government by those who have sworn to support it, is unthinkable and intolerable.”