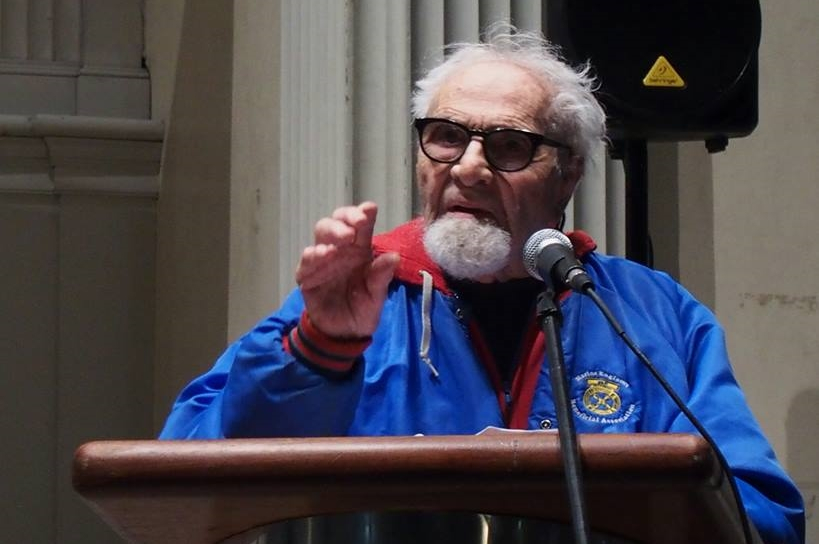 Labor activists from around the country gathered October 3 to celebrate Herman Benson’s 100th birthday and pay tribute to the organization he founded, the Association for Union Democracy, which has been advancing the cause of “lonely union reformers” for more than half a century.

From combating corruption and mob influence to making sure rank-and-file members could get an honest union election, AUD has helped thousands of unionists over the years—offering organizing, education, and legal assistance in person, over the phone, and through its books, pamphlets, and newsletters.

Benson described it as “essentially a civil liberties organization that focuses on the rights of members in their unions to free speech, fair elections, due process in trials, and fair hiring.”

Larry Hanley offered one of many examples. In the 1980s, when he was a young bus driver on Staten Island, his local’s membership meetings were known as the “Friday night fights.” He was assaulted and brought up on internal charges for speaking out.

That’s when Hanley first climbed the stairs to Benson’s tiny office. With AUD’s help, he beat the slander charges leveled against him.

But when he mentioned his plans to move up and become a supervisor, Benson cursed him out: “You s.o.b.! You’ve told me the leadership is lousy, the members don’t know what to do, you just took up two hours of my time helping you, and now you’re telling me you’re going to leave the union?”

So Hanley decided to stick with it. “I probably would have left if it wasn’t for you, Herman. So I’ve got one thing to say to you—you s.o.b.!” said Hanley, now the international president of the Amalgamated Transit Union.

Dan Boswell, a former executive board member in Electrical Workers (IBEW) Local 164, shared a similar story. With AUD’s assistance, he defended his free speech rights and in 1981 forced changes to the international union’s constitution to give members the right to criticize their officers, meet in caucuses, run for office, and not be disciplined and fined for exercising their rights.

How do you clean up corruption in the labor movement? One approach might be top-down oversight. But as Teamsters for a Democratic Union Organizer Ken Paff noted, AUD promoted a better way: democracy.

AUD influenced several defining moments in labor history, including the Miners for Democracy movement of the early 1970s and reform efforts inside the Steelworkers later that decade.

A new 25-minute film, “Herman’s Cure,” covers the highlights of Benson’s and AUD’s impact on the U.S. labor movement.

Find it, along with Benson’s memoir Rebels, Reformers, and Racketeers: How Insurgents Transformed the Labor Movement, and a slew of books and pamphlets such as How to Get an Honest Union Election and Democratic Rights for Union Members, at uniondemocracy.org.

When California health care workers were fighting off trusteeship, and recently when bedside nurses in New York were pushing to shed a century of union domination by nurse managers, AUD backed them up. Today it defends free speech on social media too.

Above all, Benson said he told each reformer, “You’re doing the right thing. Keep it up, buddy.” Sometimes this encouragement was the best thing AUD could offer: “There was often very little we could do for them. But that little loomed as an enormous mountain in their lives.”

In his closing remarks, Benson summed up the enduring need for union democracy.

In a half-century, he said, “the labor movement has become weaker, there’s no question about that. But it’s vastly improved in many ways, and it’s more prepared for the years to come—in its attitude toward immigrants, toward the lower-paid, toward rallying support from the public.

“Issues of union democracy are posed in a much different way—but there’s still a need for the defense of civil liberties and democracy within our unions. So I’m hoping that some of you will be inspired by what you heard today to join this great cause.”

A version of this article appeared in Labor Notes #440, November 2015. Don't miss an issue, subscribe today.
Mark Brenner is the former director of Labor Notes and is currently an instructor at the University of Oregon's Labor Education & Research Center.
Related
No One Else Was Going To, So These Teamsters Saved Their Own Pensions »
Bay Area Transit Unions Join Forces to Win Safety Protections and Beat Back Layoffs »
Detroit Bus Drivers Strike over Violent Attacks »
Viewpoint: Concessions Are Back. So Are the Flashbacks. »
Herman Benson’s Lifelong Fight For Democratic Unions »