Tens of Thousands in North Carolina Vow ‘Not Now, Not Ever’ 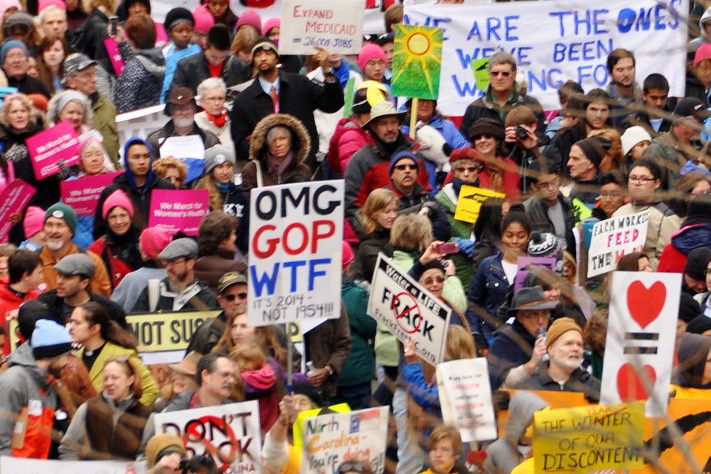 The Moral Mondays movement continues to gain steam. Marchers took to the streets of Raleigh February 8 to oppose the extreme right-wing agenda that has gripped the state's legislature and governor’s office. Photo: James Willamor via Flickr.

Tens of thousands of marchers took to the streets of Raleigh, North Carolina, Saturday to show their opposition to the extreme right-wing agenda that has gripped the state since the Tea Party gained control of the legislature and governor’s office.

The march and rally were called a Moral March—in connection with the sustained Moral Monday protests that resulted in nearly 1,000 arrests for civil disobedience during the spring and summer of 2013.

The diverse thousands who descended on the Capitol came from all over North Carolina and 32 other states, and represented a broad array of social justice movements. Labor, environmental, women’s rights, youth, LGBT, health care, and teachers groups joined with civil rights and faith-based organizations to hold what may have been the largest march and rally in the South since the Selma-to-Montgomery March in 1965.

Youth groups from across the country who were planning events for the 50th anniversary of Freedom Summer joined the events and held their own conference.

The Moral March was a continuation of the HKonJ Peoples Assemblies that have grown in size each year, reaching 10,000-15,000 last year on the seventh anniversary of the original event. (HKonJ refers to “hundreds of thousands” on J Street, where the Capitol is located.)

This year’s phenomenal numbers can be attributed to the outrage of North Carolinians in response to, among other things, the governor’s refusal to accept federal money to extend Medicaid for 500,000 uninsured people, cutting extended unemployment benefits for 150,000 workers, and passing an extremely restrictive voter suppression bill.

Kellogg’s Delivers Memphis a Slap in the Face

Review: A Dream Foreclosed: Black America and the Fight for a Place to Call Home

With attacks on women’s reproductive rights, labor rights, and LGBT families added to the toxic mix, thousands decided to take a stand.

Labor delegations from out of state included 1199 (health care workers) from New York City, the Carolina Alliance for Fair Employment from South Carolina, and individuals from New Jersey, Ohio, Georgia, Indiana, and other states.

A large teachers delegation from the North Carolina Association of Educators wore red as part of their campaign calling on teachers not to sign individual employment contracts that would require them to give up tenure in exchange for five yearly bonuses.

Fast food workers formed another of the more exciting delegations, wearing red knit caps with the slogan “Raise Up.” Dozens came from North and South Carolina and Georgia. They conducted strikes in August and December last year, and have had a constant presence in the Moral Monday movement.

“I felt awesome about the march and being a part of a movement for justice, fighting the man, and it was like we were back in the 1960s,” said Morgan Greene, a Taco Bell worker from Charlotte. “It was amazing to see so many causes out there—like women’s rights, civil rights, equality, and more… We gotta keep on pushing. We’re having an impact: Obama raising the minimum wage to $10.10 [for federal contract workers] shows we’re being heard and gotta keep pushing forward for $15."

North Carolina AFL-CIO Secretary-Treasurer MaryBe McMillan opted for a poem rather than a traditional speech. The last three stanzas reflect the emphasis the national federation promises to put on Southern organizing:

The bosses want their workers cheap,
Meek and docile like sheep.
They move their companies South,
Hoping we won’t give them any mouth.

Well, imagine their surprise
As they watch the South arise.
From the mountains to the sea,
Black, white, and brown agree.

Now is the time to take a stand
For justice throughout this land.
That’s why we’ll organize every workplace, every town,
And there’ll be no stopping us, no backing down.

“We need a Workers’ Bill of Rights made into law that supports and guarantees basic human rights for all workers,” she said.

The Southern Workers Assembly, a new regional rank-and-file alliance, marched with a casket signifying the number of deaths— 2,840—that are predicted as a result of the failure to extend Medicaid coverage.

They also demanded that charges be dropped against all those arrested during the Moral Monday protests. Many have been found guilty of some or all charges against them, and are appealing. SWA and the U.S. Human Rights Network say the charges criminalized protest and represented a violation of human rights protected by international conventions.

Rev. William Barber, North Carolina NAACP president, laid out the movement’s current demands, which put labor and economic justice at the top of the agenda:

The crowd responded with cheers and shouts when Rev. Barber said the march and rally were the start of a new season of mobilization that will include civil disobedience, voter registration, and legal action.

When the Moral Monday protests launched last year, the governor and the Republicans contended that the participants and arrestees were “outside agitators,” a return to the white supremacist mantra used during the civil rights movement of the 1950s and ’60s.

The charge was false, but in response the NAACP invited others to join the movement. Many have answered the call, both out of solidarity and out of an understanding that North Carolina is ground zero for the anti-worker, anti-women, and racist legislative agenda being promoted by the Koch Brothers and the American Legislative Exchange Council.

Moral Movements have sprung up in Georgia and South Carolina. Activist groups in many other states are considering taking up the same approach in response to austerity budgets and attacks on the poor.

In his keynote address, Barber described the attacks on the quality of life in North Carolina as “low.” The crowd responded “that’s low” after each one. He intoned that the people will not accept these policies—“not now, not ever.” He ended with a call for the movement to push the state and the nation to seek “higher ground.”

It’s hard to imagine that we can go any lower in terms of workers’ rights and economic justice in North Carolina and the rest of the country. But it is indeed possible—and probable—without a rigorous response like that emerging in North Carolina.

Go here and here to see videos of the crowds who marched and danced through Raleigh's streets February 8.

Related
Striking Alabama Coal Miners Want Their $1.1 Billion Back »
Inside the Alabama Amazon Union Drive: An Interview with the Lead Organizer »
Virginia Public Sector Workers Are Organizing to Make Their New Bargaining Rights a Reality »
North Carolina Nurses Seek Their First Union »
Film Review: Nothing But a Man »