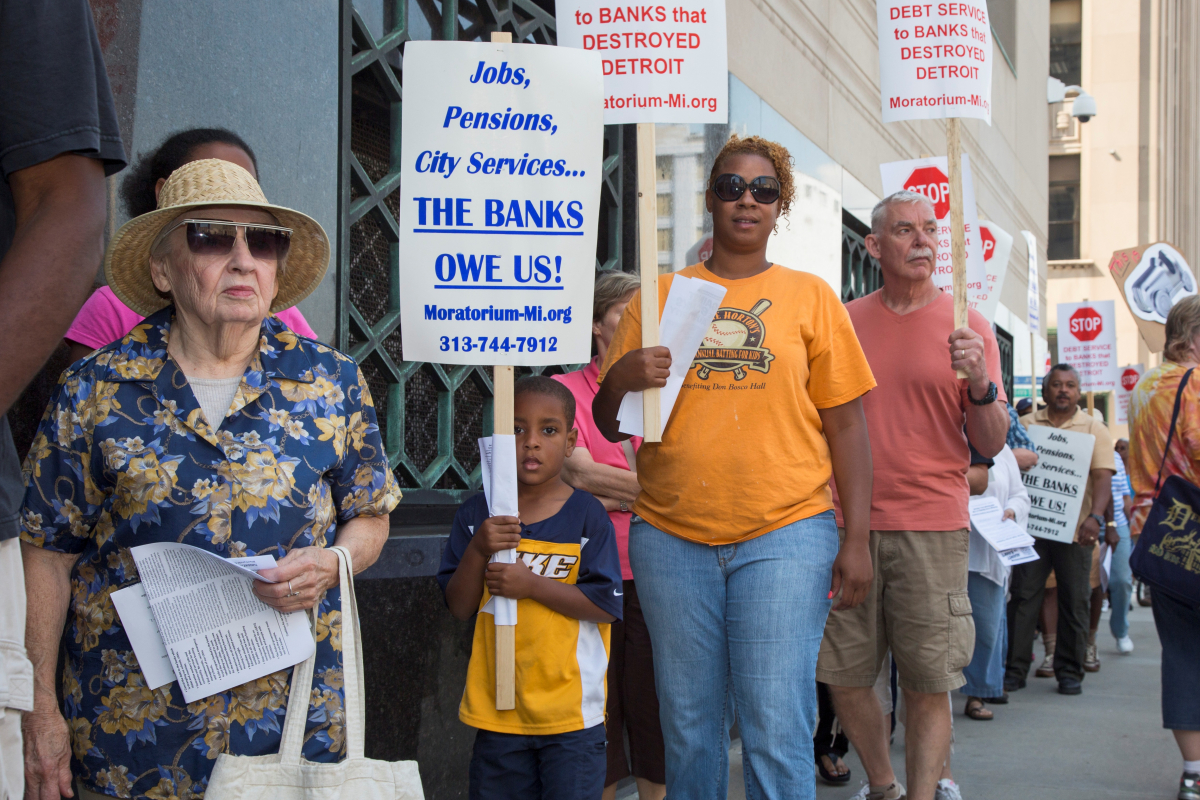 Detroiters marched to demand that workers’ pensions not be cut to pay the city’s rich creditors. Photo: Jim West/jimwestphoto.com.

UPDATE: Congress is holding hearings today on changing ERISA to allow cuts to the pensions of those already retired. In a surprise turnaround, the Teamsters union has come out against the cuts. Problems in the Teamsters' huge Central States Pension Fund were a big impetus for the proposed changes described below.

Congress is taking up a little-publicized proposal that would leave some pensioners high and dry.

Current law says pension plans can’t cut the pensions of those already retired. But some multi-employer plans are in big trouble, so their unions and employers are uniting to lobby for the right to slash members’ benefits.

“Until now,” said Karen Ferguson of the Pension Rights Center, “it was unheard of that benefits of a multi-employer retiree would be cut, except in the very rare instance that their pension plan runs out of money.” Multi-employer plans are more likely to be healthy than single-employer plans, precisely because they aren’t dependent on one company.

But a coordinating committee for multi-employer plans, a group that includes both unions and employers, is pushing for what it calls a “solution” for “deeply troubled plans”: the right to preemptively cut promised benefits for everyone in their plans, including those already retired.

Multi-employer pension plans represent 10 million workers in construction, mines, grocery, hotels, health care, and Teamster employers. The plans had worked well for 40 years, and 60 percent are still in good shape. But others could run out of money in 15 to 20 years, hit by employer pull-outs, stock market reverses, deregulation, globalization, deunionization, and low interest rates.

The Teamsters’ Central States Fund, with members in 24 states from the South to the Midwest, is the poster child for an ailing plan. Deregulation of trucking brought hundreds of non-union companies into the industry and drove most union firms out, thus reducing contributions into the fund and to Teamster plans in other regions.

The union failed to organize the non-union companies and even let the largest contributor, UPS, pull 45,000 workers out of Central States in 2007 in exchange for a big one-time payment. There are now 62,000 active workers in the fund and 211,000 retirees.

Central States is one of the architects of the proposal that Congress may take up before the end of the year.

THE RIGHT TO SLASH NOW

Under the 2006 Pension Protection Act, which is up for renewal next March, if a plan goes bust, the Pension Benefit Guaranty Corporation (PBGC), a government agency, takes over paying out benefits—though these are cut to the bone.

The top amount the PBGC will guarantee currently for a multi-employer fund member is $12,870 a year, for someone who’s worked 30 years (much less for others). This is true even if the union had negotiated a decent pension of, say, $36,000 a year.

Both the Teamsters and employers such as UPS are saying that, to forestall that scenario for troubled funds later, benefits should be cut now.

Ferguson counters, “If the economy turns around in 10 or 15 years and the plans become healthy again, those who got their benefits cut now will be dead, literally.”

She argues that if the pension fund can’t be saved and will have to turn to the PBGC eventually anyway, then it’s a lot better to keep paying full benefits and spend down the assets, rather than cutting preemptively and subjecting thousand of retirees to poverty in their last years.

The proposal on its way to Congress would give plan trustees the authority to cut pensions now to 110 percent of the PBGC-guaranteed figure, or $14,157 a year for the best-off.

It’s ironic that the premiums and guarantee levels originally set up for the PBGC assumed that multi-employer pension plans would always remain in good shape. Employers in such plans pay premiums to the PBGC of just $12 per year per worker, while those in single-employer plans pay $42. If a single employer goes bust, the maximum its workers can get from the PBGC is $27,500, more than twice the level for those in multi-employer plans.

Ferguson said the proposal has been heavily lobbied for and has support from both parties in both houses of Congress. The Teamsters for a Democratic Union (TDU) caucus, the Machinists, and some other unions are opposing it, along with the AARP.

Sandy Pope represents Teamsters at dozens of small shops in New York—precisely the workers who would be hurt by the changes. She’s angry that her international is going for preemptive concessions. “When we bargain, we ask for $2 when we hope for $1,” Pope said. “Here they’re leading with what should be a last resort.”

TDU member Dave Scheidt, who worked at Roadway, wants the government to step in, but not this way. He noted, “In 1980 our government put deregulation of trucking in place and that’s what brought this about.”

Pope thinks the government should increase premiums and fund the PBGC adequately.

Of course, those with defined-benefit pensions from any source are a minority now. “With all the baby boomers with crappy 401(k)s,” Pope said, “people have their heads in the sand about what the economy is going to look like 10 years from now. Giving people their pensions now would help.”

For more detail on the pending controversial legislation, click here. For an overall look at the crisis in pensions, public and private, click here.

A version of this article appeared in Labor Notes #416, November 2013. Don't miss an issue, subscribe today.
Jane Slaughter is a former editor of Labor Notes and co-author of Secrets of a Successful Organizer.
Related
Teamster Insurgents Plan for a Win—And What Comes After »
Review: How Workers Can Safeguard Pensions »
Viewpoint: We Must Prepare to Strike UPS in 2023 »
At a Convention Like No Other, Teamster Challengers Turn a Corner »
Employers Are Using the Crisis to Push Concessions They Don't Need »