Could a New Union Leadership Stop Sell-Off of Post Office? 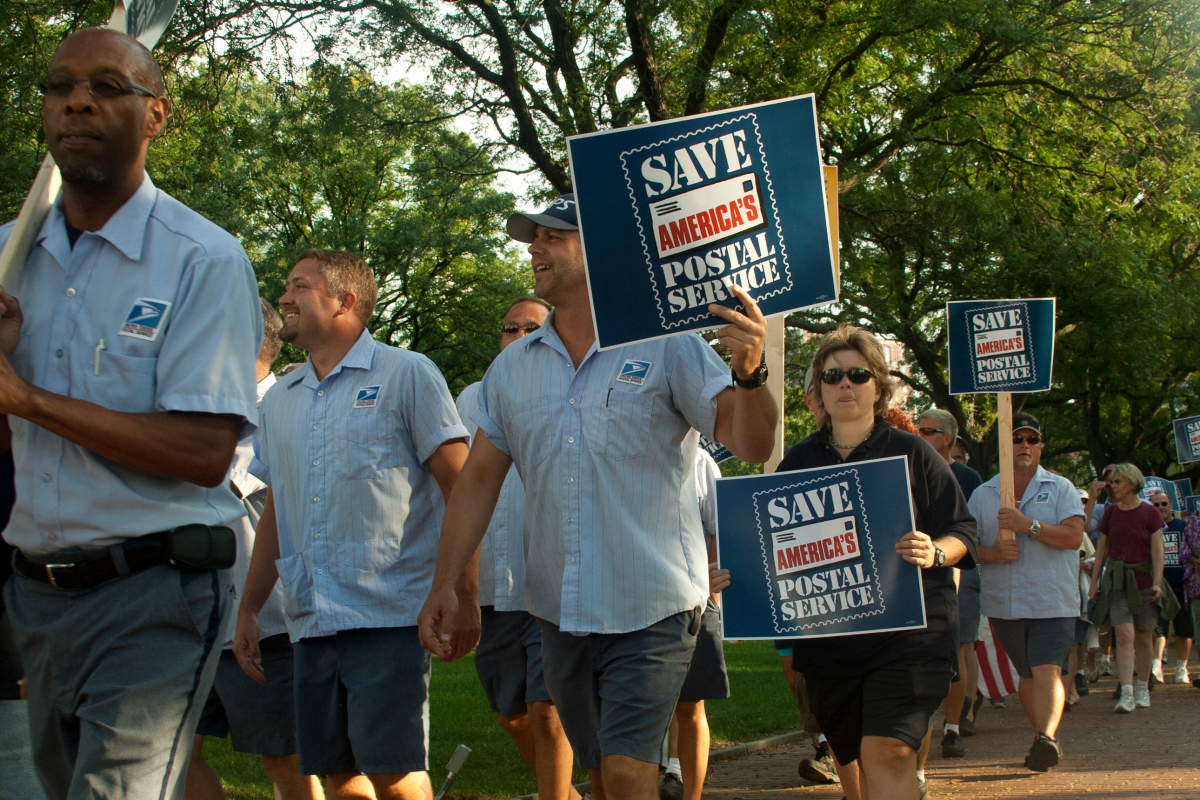 Pockets of postal workers are marching and even sitting in, but the national union has focused on lobbying. A slate of local leaders pledges to change APWU’s direction. Photo: Adam Souza.

A diverse slate of local leaders is making a bid to unseat the national officers of the American Postal Workers Union—and the stakes couldn’t be higher.

“We’re at a crossroads,” said Mark Dimondstein, the Members First Team’s candidate for president. “At the core of this whole struggle is whether the post office is going to be decisively privatized and turned over to profit-making entities and low-paid, non-union jobs—or remain a public entity that serves all the people and maintains good-paying union jobs.”

“We have not seen anybody at this point able to stop the postmaster general,” said Debby Szeredy, local president in Mid-Hudson Valley, New York, and running for vice president.

Plus, the union made dramatic concessions in 2010—including a three-tier system that funnels new hires into low-paid, perma-temp positions.

“It’s a regressive contract that takes us back 30 or 40 years,” said Tony McKinnon, a local president in Fayetteville, North Carolina, running for industrial relations director. “We have to try to stop the bleeding.”

Dimondstein was president of his Greensboro, North Carolina, local for 12 years and an APWU lead organizer for a decade. More recently he co-founded an area Jobs with Justice chapter and a community-postal worker coalition.

APWU’s members include nearly 200,000 maintenance workers, truck drivers, and clerks, whose jobs range from processing mail in plants to selling stamps in post offices. Three other unions represent the rest of the workforce, including letter carriers and mail handlers.

Unlike in many unions, APWU’s rank and file directly elects national officers via mail ballots, which will be sent to members September 10. The incumbents are called the Leadership Team.

Whoever is elected this fall will bargain the 2015 contract. Members First candidates pledge more transparency about the contract details, a firmer hand with management—and member mobilization.

Temp workers, now called “postal support employees,” were finally made union members in the last contract, but their jobs are still bad—low wages, weak benefits, little job security—and their ranks grew to about 16 percent of the APWU workforce. All new hires must now come in that way, at $12 to $15.85 per hour.

The federal hiring preference traditionally made USPS a place for veterans to find decent, unionized work. But the PSE track makes that option less desirable. Even in Fayetteville, home to Fort Bragg, a recent orientation of 120 included only four or five vets, McKinnon said.

The new middle tier lowered wages for career employees. A full-timer at Level 6 used to start at over $40,000 a year; that fell to $35,000, assuming a 40-hour week. And 30 hours can now be considered “nontraditional full time” (a way around caps on the numbers of part-timers)—so a “full-time” hire could start at just over $26,000.

APWU President Cliff Guffey says the contract “made progress” on the top issues: maintaining benefits and layoff protections, and winning modest raises for existing members. “It may not seem like much,” he wrote on the Leadership Team website, but workers in other industries have less.

After APWU agreed to the three tiers, the Postal Service went after the other three other postal unions for the same concessions—but the Letter Carriers and Mail Handlers fought it to arbitration. In the end arbitrators imposed a version of two-tier, but both unions got better deals than APWU: new hires start lower than current letter carriers and mail handlers, but their top pay is the same.

“The union should never be selling short the coming generation,” Dimondstein said. “We should always be looking to uplift and advance.”

“I think they’ve given up,” Szeredy said. “We can’t just sit back and say it’s over.”

Szeredy’s plant is one of 55 on the chopping block this round. The cuts don’t even make sense financially, she said: USPS is “spending money like water” on renovations to prepare for the shuffle. Trucking mail farther will create a domino effect of delays and pile up overtime costs.

She contacted union leaders at the other targeted plants, filed a complaint with the Postal Regulatory Commission, and brought her congressman to testify.

But despite Szeredy’s efforts and other pockets of resistance around the country—a tent city in Berkeley, a plant sit-in in Salem, Oregon—the cuts are mostly steamrolling ahead.

Putting the brakes on will require congressional action, since USPS’s supposed financial woes are Congress’s fault. They’re an accounting fiction, the result of a 2006 law requiring retiree health benefits to be funded 75 years ahead.

Dimondstein wants to unite “retirees, seniors, even business organizations, civil rights organizations, veterans’ groups, and so on, to build a movement to defend the post office—because we think Congress moves when the people move.”

Such an alliance should defend not only good jobs, but also the democratic mission of the Postal Service, said Clint Burelson, a local president in Olympia, Washington, running for clerk craft director. It could demand that USPS reduce onerous postage rates for small and nonprofit mailers and offer secure, affordable email access to the public.

Despite calls from member activists, the four postal unions haven’t staged national action together since 2011. Guffey has “openly abdicated the fight to save six-day delivery,” seeing it as a letter carriers’ issue, Dimondstein said. “The idea that we have different fights, it’s the classic divide and conquer.”

Slate members are all officers in state or local APWU chapters, traveling the country on their own dime to talk to members at plant gates.

Past President William Burrus, who retired in 2010, has endorsed them. Burrus has been publicly critical of the contract his successor negotiated, especially the reduced wages for the next generation of career employees.

The Members First campaign is not a mere protest; they believe they have a decent shot to win. “From the reactions of APWU members, we’re very optimistic that people are ready to make serious change,” Dimondstein said.

Retirees make up about 20 percent of eligible voters. Vital issues facing them, Dimondstein said, include a looming assault on the federal employee health plan and “defending six-day delivery—which all of us need as customers, and the older we get the more we need it.”

“We always talk about what we want, but how are we going to get it?” Burelson said. “Historically you get it by causing trouble in some way.”

NOTE: Since publication, this article has been changed to correct an error. The original version incorrectly implied that the other postal unions accepted the same three-tier deal as APWU. In fact, the Letter Carriers and the Mail Handlers resisted two-tier until an arbitrator imposed it—and still got terms better than APWU's.

A version of this article appeared in Labor Notes #414, September 2013. Don't miss an issue, subscribe today.

Alexandra Bradbury is the editor of Labor Notes.al@labornotes.org
Related
Letter Carrier: Air Quality Is a Union Issue »
Detroit Postal Workers Push to Dump DeJoy and His Ten-Year Plan »
The Postmaster General’s New Attack on the Mail Is a Fig Leaf for Privatization »
Can Postal Vehicles Help Us Fight Climate Change? »
VIDEO: Signed, Sealed and Delivered: Film and Discussion of Rank-and-File Militancy at the Post Office »