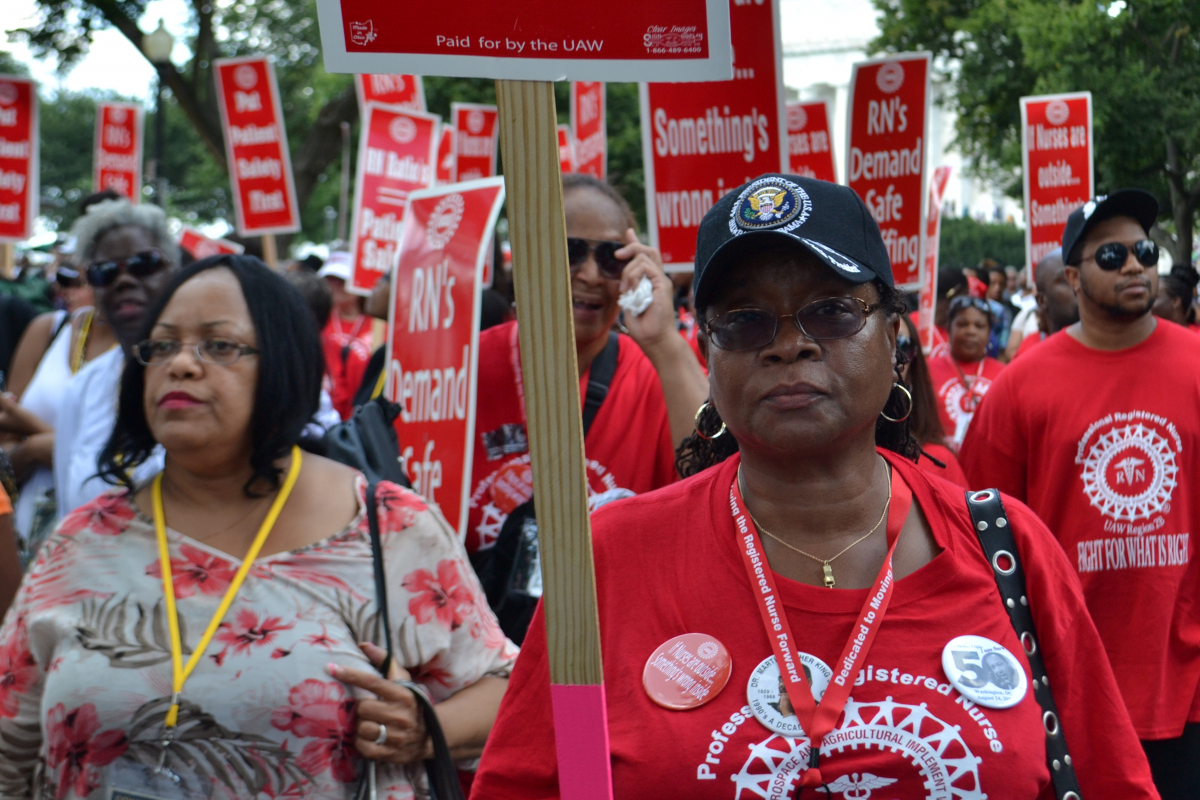 Nurses march in the 50th Anniversary of the March on Washington for Jobs and Freedom. The movement’s top priority should be “jobs, jobs, jobs,” said one marcher. Most new jobs are “part-time and underpaid.” Photo: Samantha Winslow.

“I am marching for education justice and freedom,” nine-year-old Chicago Public Schools student Asean Johnson told the tens of thousands gathered around the Reflecting Pool.

Johnson was the youngest speaker at Saturday’s march and rally, marking 50 years since the famous March on Washington for Jobs and Freedom. The National Action Network, A. Philip Randolph Institute, and many other groups co-sponsored the day’s events.

The contrast couldn’t have been starker. In 1963 the AFL-CIO chose the wrong side of history and sat out the original march. This time, a sea of union T-shirts blanketed the National Mall.

Johnson, a strong critic of school closings and ally of the Chicago Teachers Union (CTU), shared the microphone with national labor leaders such as American Federation of Teachers' Randi Weingarten and American Federation of State, County, and Municipal Employees' Lee Saunders. (Weingarten was criticized on Twitter for taking the microphone from Johnson before he finished.)

“What we dream about,” said Isaie Marc, a chef assistant at Disney World, is “better pay and better health care for everybody.”

Letter to the Editor: How Far Have We Come Since 1963?

When events such as the Trayvon Martin case arise, I wonder what kind of response labor will take. As a woman of color and a union member, I want to address both the incident itself and the issues that led to it: racism, racial profiling, lack of gun control, and second-class citizenship.

Labor has responded in the recent past to similar issues: apartheid and the shooting of Oscar Grant by a BART policeman in 2009, just to mention two. In both cases the Longshore union ILWU used its clout to make statements against them.

In the case of apartheid they refused to unload ships from South Africa. Nelson Mandela mentioned the ILWU in his 1990 speech in Oakland, after being released from his imprisonment after 27 years.

There was a demonstration in 2010 regarding Oscar Grant and some of the unions on campus signed resolutions.

Now unions should reach out to the communities impacted by racism and racial profiling and take part in mass demonstrations to take a stand against such injustices. It appears that this cycle continues; I remember the Rodney King decision.

We are now coming up on the 50th anniversary of the March on Washington. This gives me cause for reflection: just how far have we come to fulfilling the dream?

Marc was one of about 100 members of UNITE HERE Local 737 to make the trip up from Orlando. Disney World workers have to pay $125 or more per week for family health care, he said.

Marc wasn’t the only one with economic justice on his mind.

Lakesia Collins, a certified nursing assistant in a Chicago nursing home, said her union, HCII, is working for racial justice by joining rallies about school closings and “about poverty, period.”

Johnson said school closings in Chicago and all over the country are targeting black and Latino students.

Collins and others members of SEIU’s young members group, Millenials, gathered in D.C. ahead of the big march. They joined other youth-oriented groups, including the Dream Defenders (who just finished a 31-day sit-in at Florida Governor Rick Scott’s office, calling for an end to the school-to-prison pipeline, Florida’s “Stand Your Ground” law, and an end to racial profiling), to march against the American Legislative Exchange Council Friday.

ALEC—which brings together right-wing state lawmakers and their corporate patrons—supports Stand Your Ground and laws that make it harder for young people to vote, Collins said.

Rev. William Barber, president of North Carolina’s NAACP, was among Saturday’s speakers. Barber has been a leader in the Moral Mondays protests uniting labor and community groups against a raft of right-wing legislative attacks.

“Unions should be standing up for everybody’s rights,” not just their members, said Amyre Brooks, who came with about 50 others from United Auto Workers Local 839 in Rawsonville, Michigan.

Mable Thomason, a semi-retired dental hygienist at Lutheran Medical Center in Brooklyn, is worried about voting restrictions in many states, and photo ID rules affecting the elderly. “They are trying to sneak it in,” she said.

“I’m very freaked out about the Voting Rights Act,” said Tom Smucker, president of Communications Workers Local 1101’s council of retired members, in New York. Portions of the act were overturned in a Supreme Court decision this summer.

Smucker’s wife Laura Kogel said she came because of the Trayvon Martin verdict and New York’s stop and frisk policy too.

Trayvon Martin’s name and face were everywhere, on T-shirts and signs. The verdict was “a travesty,” said Danny Clemons, of American Postal Workers Union Local 711 in Greensboro, North Carolina.

“Trayvon Martin was my son, but he’s not just my son,” his mother, Sybrina Fulton, told the crowd. “He’s all of our son, and we have to fight for our children.”

‘I Didn’t Have the Nerve’

The fact that his union sent a bus down to the march was “probably very different than 50 years ago,” Smucker said. “Things that might have been a source of tension 50 years ago, I don’t think are now.”

Although black unionists spearheaded the 1963 march—and some unions, prominently including the UAW, mobilized members to attend—the AFL-CIO refused to endorse it. The federation was still fiercely defending segregated unions at that time. A new book by William P. Jones traces the march’s fascinating history and legacy.

A. Philip Randolph, the Brotherhood of Sleeping Car Porters leader who pushed hard for the original march, warned that discrimination in hiring and in unions could create a “forgotten slum proletariat in the black ghettoes of the great metropolitan centers of the country.”

“Fifty years ago I was scared to come here. I was a young man in the South then, and didn’t have the nerve to stand up,” Herring said. This time, he came on one of four buses sponsored by UAW Local 12.

“Certain people get certain jobs and certain people don’t,” because of race, Lucky said. And since Indiana went right-to-work, people there do the same work he does, for half the pay. His union sent a busload, too.

You don’t often see someone who worked in management march in an AFL-CIO T-shirt, but sure enough, there was Earline Rush. She retired from a plant in South Carolina. “You see what happened in Detroit, where they’re trying to get rid of the unions,” she said.

Rush came to commemorate her father, sister, and brother, who marched in 1963—“and to say the fight is not over.” The movement’s top priority should be “jobs, jobs, jobs,” she said. Most new jobs are “part-time and underpaid.”

John Holmes, a toolmaker in a South Carolina plant, lost his job in a union drive and was blacklisted. If it hadn’t been for his wife’s job, “we would have gone under,” he said.

Holmes managed to scrape together work and eventually retire—but he knows plenty of people who didn’t get that chance, because “a calamity occurred at the end of their lives.”

“The only way to get things done is the grassroots,” Holmes said, “and that grassroots is us.”

And James Ellerbee, a retiree from Plasterers Local 67, has been an AFL-CIO member for 45 years in Detroit.

“I went through everything Detroit has gone through,” he said: jobs moving overseas, wages dropping, and the next generation, like his son, buried in college debt.

“We’ve been trying to get the nation to understand what was going on with us,” Ellerbee said. “If it hasn’t happened to you yet, just wait.”

Alexandra Bradbury is the editor of Labor Notes.al@labornotes.org
Related
Chicago Passes Union-Backed Bill for Civilian Oversight of Violent Cops »
Review: White Workers Who Buy into Racism Are Shooting Themselves (and Everyone Else) in the Foot »
'We Took Care of Each Other': A Maritime Union's Hidden History of Gay-Straight and Interracial Solidarity »
Duke University Press Workers Organize with NewsGuild »
The National Guard Came to St. Paul to Repress Protests. We Kicked Them Out of Labor’s Hall. »