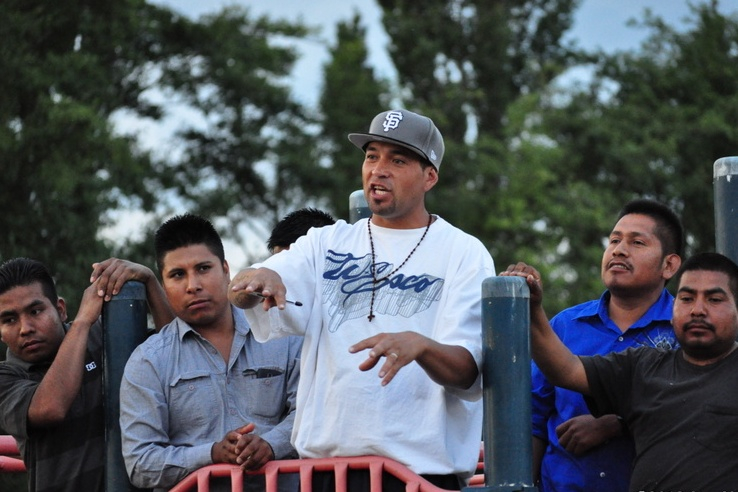 The walkout won reinstatement of a fired co-worker and ousted an abusive supervisor. Photo: Star Murray.

As non-union fast food workers’ strikes caught the public eye this summer, at the other end of the food chain, farmworkers were also stopping work. Pickers at Sakuma Brothers Farms north of Seattle have walked off the berry fields twice and launched a boycott.

More than 250 migrant farmworkers walked in silence, like a great wave, from the labor camp where they live to a field office July 10.

There, they broke their silence with owner Ryan Sakuma and a team of managers—demanding justice for a fired co-worker, 70 cents per pound of berries, an end to sexist and racist harassment by their supervisors, better living conditions, and 10 other items.

Federico Lopez, a strawberry and blueberry picker from Oaxaca, Mexico, had been fired for voicing a grievance against a piece rate of 30 cents per pound. His co-workers stopped work the next day, formed an 11-member negotiating committee, and presented their list of grievances.

Sakuma specializes in highly perishable and labor-intensive berry and tea crops. Its biggest clients are Haägen-Dazs and Driscoll’s. The majority of its seasonal migratory pickers are indigenous, descendants of the first nations people of southern Mexico. Their mother tongue is Triqui or Mixteco, not Spanish.

The pickers organized themselves. Unlike the fast food workers, they do not have a big union backing them up.

Their first work stoppage ended after six days with the reinstatement of Lopez and the transfer of a hostile foreman, notorious for humiliating pickers with verbal and sometimes physical abuse.

For more than a decade, indigenous migrant workers from Oaxaca and Guerrero have made the trek from California’s San Joaquin Valley to Washington’s Skagit Valley to harvest berries in the summer. They have stopped work before, in 2004 (winning an anti-intimidation policy and a higher piece rate) and 2008 (no gains).

Committee member Francisco Paz has worked for Sakuma Brothers Farms for 12 years—since he was 14. He is one of the fastest pickers. Someone with his ability could settle for the piece rates Sakuma offers because he could make much more than minimum wage, unlike the majority.

But the struggle for a better future for his family, he says, is more important than short-term gains that aren’t sustainable. His hard work has taken a toll on his body, and without medical insurance, he believes he will not be among the fastest pickers much longer.

Paz is a husband and father of three. They and the other migrant families live in company-run labor camps: temporary cabins with plywood walls, tin roofs, and just enough room for sleeping bunks and a quarter-kitchen.

“It’s not the Hilton,” CEO Steve Sakuma admitted to a local reporter—but he argued the cabins are up to state standards and workers don’t have to pay rent or utilities.

Housing has long been a sore point in the industry. Growers complain about having to provide it, and workers say the “free” housing gives the growers leverage and control over their private lives.

The members of Familias Unidas por la Justicia (Families United for Justice), as the workers have named themselves, are seasoned pickers. They say they deserve respectful treatment and to negotiate directly with their long-term employer.

The community authorized a second work stoppage on July 23. More than 200 workers picketed at the entrance of the labor camp.

The issue: differential wages they considered a reprisal for their first stoppage. The second stoppage ended after three days with an agreement that three pickers chosen by the committee will participate in a new process for deciding piece rates.

Sakuma Brothers applied for 170 H-2A guestworkers from Mexico this year. The pickers watched as cabins were renovated for the guestworkers and equipped with new appliances, mattresses, bedding, and cookware in order to bring them into compliance with federal standards—the very improvements initially denied to Familias Unidas por la Justicia.

The guestworkers’ transportation costs would be covered, and they would receive higher wages than the farmworkers had been earning for more than 10 years.

To add insult to injury, on August 5—the day the guestworkers were scheduled to arrive—a supervisor told youth pickers they would no longer be needed because of the guestworkers.

At press time, guestworkers had not arrived due to pending investigations by the Department of Labor and other federal agencies.

The farmworkers have had sporadic work for more than a month—due partly to the work stoppages and partly to the nature of berry crops, which sometimes aren’t ripe enough to be picked. The company has been laying off pickers for three days at a time. Unions, social justice organizations, and conscientious consumers have donated aid.

Raul Merino, in charge of distributing this aid, said workers want to negotiate directly with Steven Sakuma “so that next year we can just come back and work, and not have to do this again.”

What community organizer Rosalinda Guillen describes as the group’s “deep democratic process” grows out of the workers’ shared experiences, including cultural practices of the Mixteco- and Triqui-speaking people.

The tequio, for example, is the traditional practice of community collaboration to accomplish a task for the public good. A tequio functions on an honor system. The community delegates a task—say, putting on a saint’s day celebration—to a particular family or community member. That person then draws from the community’s labor and thinking power to help complete the task.

This practice has been used to equitably distribute aid among more than 300 people.

In Oaxaca, your word is your bond. Contracts are made face to face. This is one reason workers have demanded to meet directly with owners Ryan, Steve, and John Sakuma and not third-party mediators.

The pickers have struggled for more than 10 years without any substantial gains, so they are trying something new—“for you [the public] to pay attention about what is happening to us,” Lopez said.

Familias Unidas had won reinstatement of their co-worker, removal of a hostile supervisor, mandatory breaks, better living conditions, $6,000 in back wages for pickers who were minors—and a more equitable process for determining wages.

But then negotiations stalled. The firm lawyered up and held back from putting important concessions in writing, including promises of no reprisals.

And after the agreed-upon “test pick” process came up with a rate of 48 cents per pound (to make $12 an hour), the company refused to pay that much. “We had made an agreement,” said President Ramon Torres, “and it is the third one they did not honor.”

Our eyes are on the next wave.