Summer of Solidarity: Tour Will Connect the Grassroots 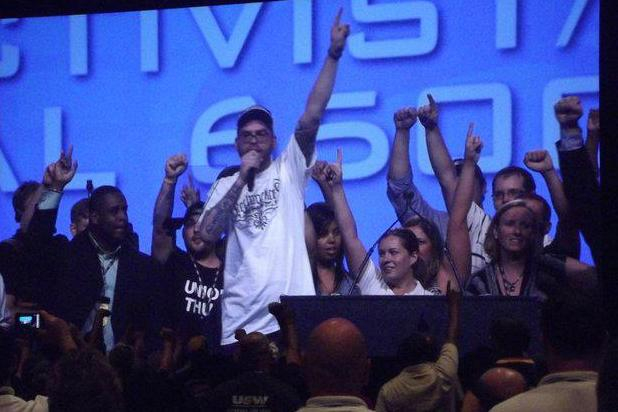 Steelworkers and others are touring the country in August to support fights for contracts, against foreclosures and whatever local struggles need some solidarity. Photo: Summer of Solidarity.

The Summer of Solidarity tour is coming to a city near you!

Two years ago our small Steelworkers local was locked out by Honeywell. The fight seemed overwhelming: 220 of us in Metropolis, Illinois, were taking on one of the most powerful companies in the world. It was David vs. Goliath—but through the 14 months of our lockout we were able to build support from all around the world. Road warriors from our local traveled to New Jersey, Chicago, Madison, Washington, Los Angeles, San Francisco, Pittsburgh, Philadelphia, and even Belgium and Germany to ask for support and put pressure on Honeywell.

We received incredible support, developed amazing relationships, and ended up beating back most of the company’s key concession demands and winning a contract we could be proud of. We learned how valuable it is to build solidarity with workers across the country and around the world.

But we also realized that we can’t just think about solidarity when we’re in crisis. That’s why we’re working on a project to pay it forward and show some solidarity with our sisters and brothers who are waging amazing struggles around the country.

This summer, a dozen union activists and community partners are traveling coast to coast in a 17-day, 13-city road show called the Summer of Solidarity Tour. At each stop we’re working with local unions and community groups to organize actions, educational events, and cultural events to support local struggles.

Local union activists who’ve been through tough fights like our lockout will be on the tour as well: A Steelworker who spent a year on strike against the global mining giant Vale in Sudbury, Ontario. Steelworker local leaders who waged a long campaign to save their refinery in Philadelphia. Activists fighting to win fair contracts for carwash workers in Los Angeles.

Getting a dozen activists across the country isn’t free, and since this is a grassroots effort—not organized by any national union or federation—we’re relying on grassroots support. You can make a donation here.

We’re still firming up local events in each city, so check out www.SummerofSolidarity.org for the most recent schedule of events as we come through town. If you want to host an event, shoot us an e-mail at SummerofSolidarity[at]gmail[dot]com.

Stephen Lech is president of Steelworkers Local 7-669 at the Honeywell uranium enrichment facility in Metropolis, Illinois.

Related
Employers Are Using the Crisis to Push Concessions They Don't Need »
Striking ATI Steelworkers Hold the Line for Premium-Free Health Insurance »
Interview: If Only Unions Had Managed to Organize the South, Could Trump Have Been Avoided? »
Copper Workers Strike to Stop Concessionary Trend »
Poultry Workers and Allies Organize in the Wake of Anti-Immigrant Raids »