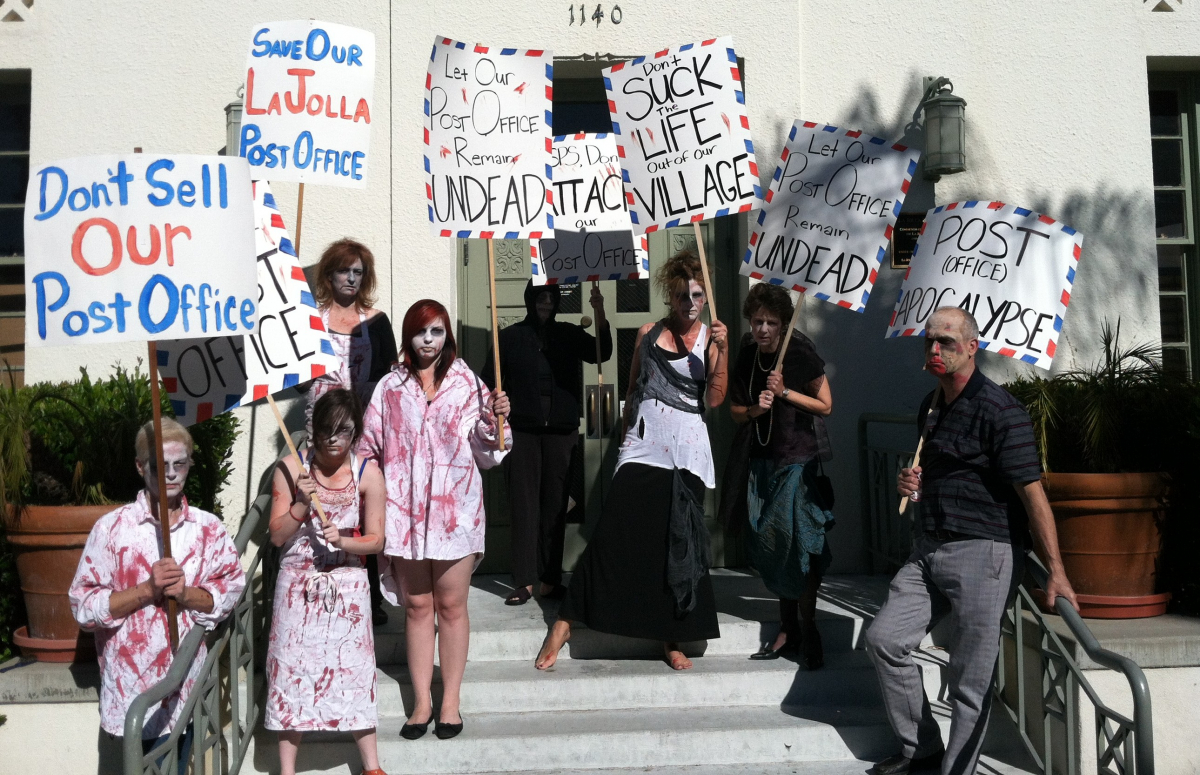 Zombies rallied around the La Jolla, California post office at Halloween this year. Workers say cutbacks will drain the lifeblood from the popular service--and make it more vulnerable to privatization. Photo: Communities and Postal Workers United

The number will be fewer next year, and every year from now on, until the beloved institution shrinks beyond recognition, if the Postmaster General and other privatization advocates get their way.

“This was a great job, one of the best jobs in America,” said recently retired Oregon letter carrier Jamie Partridge. “It pisses me off that it’s being dismantled.”

With customers and workers up in arms at his original plan to close nearly 4,000 post offices and half the nation’s mail sorting plants (see more here), Postmaster General Patrick Donahoe has responded to pressure by postponing some closings and spreading the pain.

Donahoe’s latest revised list of 13,000—about 40 percent of the post offices in the nation—will either see hours slashed or close altogether. In mid-November the cuts took effect at the first wave of 500 post offices, reducing their open hours to six, four, or even two hours a day. The sorting plants are now slated to close in phases as well, leaving for last the areas where communities are resisting.

Predictably, the planned cutbacks target low-income and rural areas, which may bring in less revenue but also rely on postal service the most.

Workers say some of the harshest blows would hit seniors and veterans who receive prescriptions through the mail and people in rural communities, where post offices can double as hubs of community activity.

Postal activists say the drive to slash reflects an ideology opposed to the very idea of public services. It’s the kind of mindset right-wing lobbyist Grover Norquist displayed when he famously said he’d like to shrink government to the size where he could drown it in a bathtub.

But it also reflects the hunger of corporations who want to squeeze profit from the mail, which represents $66 billion in revenue every year. Said Chicago letter carrier Melissa Rakestraw, “It’s the same reason they want to turn public schools into charters. There are people just foaming at the mouth to get that revenue into private hands.”

UPS and FedEx have deals to save labor costs by dumping packages onto postal docks for letter carriers to deliver. As Rakestraw put it: “We’re just flat-out subsidizing their business.”

Some private companies long ago found ways to prey on USPS. When the Postal Service developed high-tech sorting machines, non-union mail-sorting houses sprang up to siphon off business. Their big corporate customers get a discount for pre-sorting high-volume mail.

While private companies nibble around the edges in these ways, the long-range plan of postal privatizers is to make service slower and spottier so that more and more customers switch to UPS and FedEx.

A big mail sorting plant in Edison, New Jersey, is closing, for example, despite the chaos caused by last year’s holiday-season closure of a similar plant in Frederick, Maryland. The backup produced delays of over a month, reported Baltimore truck driver Tom Dodge.

Mail that would have been sorted in Frederick now has to travel as much as 150 miles round trip for sorting in Baltimore. In bad weather, the mail just waits. “We even cleaned out the basement because there wasn’t enough room for all the mail,” Dodge said of last year’s fiasco.

And Representative Darrell Issa is pushing for what North Carolina postal union organizer Mark Dimondstein called “the big enchilada” of downsizing: getting rid of Saturday delivery. Awkwardly for postal unions, President Obama’s 2013 budget does the same.

Issa, one of the richest men in Congress, chairs the House committee that oversees USPS. His postal bill, the worst of several now pending, includes cutbacks Postmaster General Donahoe doesn’t have the power to make, like canceling the sixth day of delivery and annulling layoff protections in union contracts. Partridge called him “point man for the 1% agenda.”

Issa and his backers claim the Postal Service’s financial woes reflect an outdated, dying institution. They point to falling first-class mail volumes in the era of email and electronic bill-pay.

It’s true letters are down, postal workers say, but the agency was adjusting fine and recovering its financial footing until Congress went on the attack. Parcel mail is actually on the rise as people buy more stuff online.

Congress manufactured the current financial crisis with an accounting sleight-of-hand. USPS would be in the black if not for an extreme 2006 law that requires the agency to pre-fund retiree health benefits 75 years in advance, before some of these future retirees are even born. This means it owes a $5.5 billion payment to the Treasury every summer. This year it had to default.

The resulting USPS budget deficit has created an opportunity for privatization advocates to hack away.

Postal workers fear too many more cuts could turn the artificial budget crisis into a real one. As Issa and Donahoe dismantle the network, cut hours, and delay the mail, customers will be driven away—especially business customers—destabilizing what is now a sustainable business.

USPS receives no tax revenue. It breaks even by making money on some services while taking a loss on others. “From the bottom of the Grand Canyon to the outback in Alaska,” Partridge explains, “we deliver universal service at universal rates.”

But that model flies in the face of free enterprise. A for-profit company would charge an arm and a leg for far-flung deliveries, or abandon unprofitable areas altogether.

DISCOURAGED ON THE JOB

Cuts to the workforce will disproportionately affect veterans, who make up 23 percent of postal workers, and African-Americans, who are 21 percent.

Working conditions for postal workers are declining. A freeze on permanent, full-time hires has produced a growing corps of perma-temps with no path to benefited positions. Rakestraw said she sees returning soldiers from Afghanistan and Iraq caught in this limbo.

Many letter carriers now work overtime almost every evening, covering vacant routes after their own. On the clerk side, management cut staff in hopes of automation efficiencies that never materialized, so workloads are up.

The four postal unions have no-layoff clauses in their contracts, so workers get “excessed” into other postal jobs instead. This can mean reassignment up to 50 miles away.

“I knew a couple who worked in the Western Jersey facility,” Dennie said. “The husband and wife got excessed to separate facilities 100 miles apart.”

It can also mean being asked to take on an unrealistic new job. Excessed clerks are frequently slotted into vacant letter carrier positions. “Someone’s been a clerk 20 years,” Dennie said, “and at that age you tell them all of a sudden, ‘You’re a letter carrier. Put a bag on your back and walk around in the snow.’”

For many, retirement as soon as possible seems the only way out.

A raft of competing bills—some that would address USPS’s artificial financial trouble, and others that would cut even more—have all been stalled in Congress. The lame-duck session may unstick things, for better or for worse.

But postal activists aren’t waiting on Congress. By stalling threatened closures with local protests, they’ve bought some time to strategize.