How Can Labor Combat Obama's Secret 'NAFTA of the Pacific'? 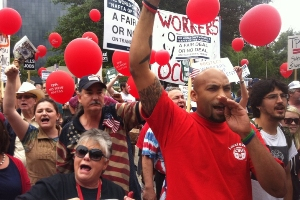 Texans rallied against the NAFTA-like Trans Pacific Partnership, which would protect investors and not workers. Photo: CWA.

The latest project of corporations seeking to ease movement of capital around the globe is the Trans Pacific Partnership, known by activists as “NAFTA of the Pacific.”

Text of the proposal that leaked this week, released by the consumer group Public Citizen, indicate the free trade proposal will continue strong rights for investors and weak protections for labor, the environment, and local democracy.

The agreement is drafted to include Australia, Brunei Darussalam, Chile, Malaysia, New Zealand, Peru, Singapore, Vietnam, and the United Sates. Discussion of inviting Canada, Mexico, and Japan has inspired protests in all three countries.

The TPP is being negotiated in secret. While the public has no access to the full text, 600 representatives from lobby groups like the American Petroleum Institute and corporations like Johnson & Johnson do have access, and negotiators seek those representatives’ advice.

Because of the difficulty of making change once the treaties are signed, activists have focused on pushing for transparency in the current process. Public Citizen's Global Trade Watch circulated petitions nationally ahead of the recent TPP talks in Dallas.

Activists met the negotiators with creative protests at the meetings, including a presentation by members of the satirical direct action theater group Yes Men, who attended a gala to present U.S. Trade Representative Ron Kirk with a “Corporate Tool” award.

Activists have an uphill battle in Washington: Although candidate Barack Obama often spoke against the ill effects of NAFTA and similar trade deals, the president’s administration has inked trade deals with Korea and Colombia on the same model—over the strenuous objections of unions and other groups.

Because NAFTA-like trade agreements make it easier to move work to low-wage areas, or effectively threaten to do so, they have been devastating for workers in the U.S. Provisions promoting competition in agriculture have driven many subsistence farmers off their land and into cities to seek work, creating a downward wage spiral for workers in other countries as well.

Such trade deals include mechanisms that tie the hands of democratically elected governments to act in the public interest, if that interest interferes with competition and profits.

Corporations have used these mechanisms contained within trade deals to target many regulations. When California restricted use of the chemical MTBE, a gasoline additive, because of contamination of aquifers and municipal water supplies, the Canadian company Methanex sued under NAFTA, claiming that the state had cheated it out of $970 million in profits it would have made selling MTBE.

California defeated the claim, but only after a six-year, $4 million court battle not all governments would mount.

Local anti-sweatshop ordinances or laws mandating local purchasing, or other regulations designed to protect jobs or enhance the quality of jobs, appear ripe for similar attack.

The mere threat of being sued has already had a chilling effect on legislators. In one case, representatives from China contacted the Vermont legislature to say it must pull legislation under consideration that would regulate toxic toys and electronic waste disposal, because it might violate agreements that the U.S. is party to.

In an effort to shift the discussion of trade fairness in a broad way instead of engaging just one fight at a time, unions and allies in Maine worked together in 2002-03 to pass legislation establishing the Maine Citizen Trade Policy Commission. The campaign was supported by a grassroots petition that gave signature-gatherers the opportunity to educate signers about the importance of trade issues.

The commission’s mandate is to monitor and respond to the effects of international trade on Maine, with input from diverse sectors of the population and regular hearings to educate both legislators and the public.

Since its establishment in 2003, the commission has worked mostly by consensus and has taken positions supported by the full spectrum of commissioners, including the legislators from both parties.

Probably because of this broad support, the commission has helped to move Maine’s two Republican senators to vote against some trade agreements, including the 2005 Central America deal. The commission also helped put a Maine legislator on the national committee that advises U.S. trade negotiators.

The commission’s public hearings have made its legislators see how these agreements impact Mainers and the potential of our legislature to truly govern. Most Maine residents are all too aware of the job losses in our pulp, paper, and shoe industries as it has become easier to move those jobs. But many learned for the first time at a hearing that, for instance, Maine’s apple growers are increasingly struggling against fruit imported from China.

This kind of basic, ongoing assessment of trade deals and education about their effects is necessary but not sufficient to the task of creating a new framework for international trade that puts the needs of communities and the environment ahead of the profits of multinationals.

Cynthia Phinney is a member of Electrical Workers (IBEW) Local 1837 in Maine and New Hampshire. She served as the labor representative on the Maine Citizen Trade Policy Commission 2003-2010. Find out more about the TPP and get involved at citizen.org/trade. Information on the Maine commission can be found at maine.gov/legis/opla/citpol.htm.

It is time for the labor movement to wake up and acknowledge the fact that the "Democratic Party" is no longer democratic, but is currently controlled by oligarchs that only represent the ruling elite, not the rank and file. The party that once defended individual rights and liberties is now dedicated to cradle to grave taxation and regulation. Instead of reigning in Homeland Security they are pushing for ever increasing surveillance and heavy handed abuse of freedoms long cherished. Do not wait until drones and side scan x-ray machines are watching your every move, the time to wake up is now.