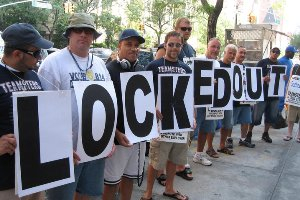 Teamster art handlers voted to settle their dispute with Sotheby’s yesterday, ending a 10-month lockout that became a symbol of Occupy Wall Street’s fight against the austerity agenda of the 1%.

Teamster art handlers voted to settle their dispute with Sotheby’s yesterday, ending a 10-month lockout that became a symbol of Occupy Wall Street’s fight against the austerity agenda of the 1%.

The union’s creative tactics put a spotlight on inequality in the most unequal city in the U.S. While the workers who moved the art faced wage cuts and unstable jobs, art buyers dressed to the nines paid millions for paintings.

The high-end art auction house locked out the 43 Teamsters when they refused a contract that one member said “would put us on the path to extinction” by allowing work to be contracted out to non-union workers with no protections.

Occupy Wall Street took up the cause of the locked-out art handlers, staging a series of disruptions at Sotheby’s auctions. Dressed as customers, they rose to speak about workers’ rights when bidding reached a crescendo, causing the art dealer to impose a $5,000 deposit requirement to attend auction events.

At Sotheby’s marquee event, a contemporary art auction in November, seven Occupiers locked themselves together with bike locks, briefly blocking the entrance, while 400 demonstrated outside. Inside, one painting went for $61.7 million.

Just last month, Sotheby’s presided over sale of “The Scream,” Edvard Munch’s 1895 pastel, for $120 million. The union had used the image throughout the conflict, labeling Sotheby’s “bad for art.” Several artists backed the handlers’ campaign.

The small group of workers fought hard, taking aim at Sotheby’s board members, picketing, and speaking out in the middle of pricey charity events attended by 1 percenters. Their creative tactics and direct action pushed hard against the takeaways their employer demanded, keeping members and supporters engaged in a long campaign that didn’t just surrender to the rules of labor law that box in unions.

“People are ready to go back to work,” said Teamsters Local 814 President Jason Ide. “After 10 months we fought our way back to decent job standards.”

Lockouts have increasingly become an employer weapon of choice, partly to prevent workers from conducting slowdowns or other in-shop actions after contracts expire. Among the three largest work stoppages in 2011, two were lockouts.

The auction house isn’t experiencing the recession; in 2011 it enjoyed its best year since 2007, clocking $5.8 billion in sales and $171 million in profits.

But the art handlers thought their employer was taking advantage of the economic downturn to scare them when it rewrote their contract “to the point that it was non-union,” said Paul Wepprecht shortly after he and his co-workers were locked out.

The new contract may not settle a war of attrition that had simmered even before the lockout. The union was not able to win greater protections for temps or limit their use.

But Sotheby’s was unable to push forward other harmful proposals, and the Teamsters won language that strengthens their seniority rights in job assignments and overtime.

The employer cut health benefits in January, but the union had established a lockout fund to sustain members during the conflict.

Although the union was unable to close the loophole for temporary work, members decided it was time to head back inside. Now the local, which has moved aggressively to organize non-union competition in the moving and storage industry under the leadership of a reform team, will contemplate how to regain their leverage.

“We have a pretty good game plan going forward to build our presence in this industry, so when we're negotiating with any of these employers we'll have a lot more of the industry under our belt and a lot more leverage,” Ide said.

“Management needs to know the A-Team is back.”

Related
UPS Drivers Stage a Walk-in to Defend a Fired Co-Worker »
Teamsters United Takes the Wheel »
Work Saturdays, Huh? How UPS Drivers Resisted by Complying »
Teamster Insurgents Plan for a Win—And What Comes After »
Viewpoint: We Must Prepare to Strike UPS in 2023 »