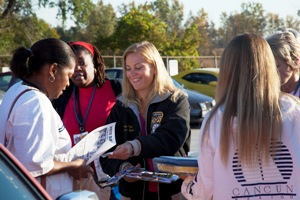 Teamsters presidential candidate Sandy Pope (third from left) campaigns in Chicago. James Hoffa will outspend her 10-to-1 but he can’t match the enthusiasm of her grassroots network. Photo: Jim West.

Teamsters are voting for their national officers in a mail ballot that will determine whether the union’s leadership is jolted to life—or remains asleep at the wheel.

Ballots went out October 6 and will be counted November 14. The race pits 13-year incumbent James P. Hoffa against a former ally, Vice President Fred Gegare from Wisconsin, and against Sandy Pope, a New York local president and longtime leader of Teamsters for a Democratic Union (TDU).

A typical turnout is 20 percent of the 1.3 million-member union.

Pope is expected to do well among workers under national contracts—freight, carhaul, and UPS—that are bargained by international officers and where workers are fed up with Hoffa. TDU’s network of grassroots activists is her best ally.

At UPS, contract enforcement is weak as the company responds to the bad economy by piling more work on drivers and package handlers, forcing more overtime, and eliminating full-time jobs. Part-time workers still start at $8.50 an hour. The 40,000 active and laid-off workers under the National Master Freight Agreement have suffered concession after concession as their numbers have shrunk.

Pope’s challenge will be to attract votes in the many other sections of the union, from construction to warehouses to the former Graphic Communications Union, where contracts are local. Members see “the union” as their steward and the international is not a factor.

She has pledged to coordinate bargaining for Teamsters working under common employers such as Coca Cola, Kroger, and Waste Management, but for now, most such members have a distant relationship to the international and don’t vote in large numbers.

In previous Teamster contests, the question was whether the network of reformers could beat the network of local officers, both of which campaigned vigorously. The reformers garnered 35 percent of the vote in both 2001 and 2006.

This time around, Hoffa is generating almost no enthusiasm among local officers or stewards to go out and campaign. It will take 125,000 to 150,000 votes to win.

Frank Halstead, a warehouse worker in Los Angeles, said that as he campaigns for Pope he sees a big difference from 2006. “Warehouses where the officers were hardcore Hoffa, we can now campaign without harassment,” he said.

Hoffa’s advantages are his name recognition and his $2 million war chest, made up of contributions from those same unenthusiastic local officers (who dare not buck the administration openly).

Pope tells of a YRC freight driver she met while campaigning in October, who hadn’t previously heard of her candidacy. He’d already voted for Hoffa, explaining, “I don’t like him but I know who he is.”

After talking with Pope, the driver ordered a new ballot and cast it for her.

The difficulty for the Pope campaign is that not all Teamsters will have the opportunity to talk with a fellow Teamster face to face.

The budget the Hoffa campaign submitted to the election supervisor said he would spend $860,000 just on mailings. In all, the Hoffa campaign will outspend Pope 10 to 1. (Campaigns must submit reports because the Teamsters are still under a limited form of government monitoring.)

Every Teamster has also received two robo-calls from the union with a general “please vote” message, one from Bill Clinton and one from Danny De Vito, co-star of the 1992 film "Hoffa."

Pope has been campaigning tirelessly at workplace gates across the country, meeting a good response that will boost her vote totals, as will the national media publicity she has received. She pledges to pour money into organizing and to tell employers “the concessions stand is now closed.”

She promised TDUers at their convention this fall she would convene local, regional, and national strategy sessions, telling officers to “leave your golf clubs at home, bring your shop stewards instead.”

Her campaign, sandypope2011.org, is organizing dozens of phonebanks staffed by volunteers across the country. At a recent Labor Notes school in the Twin Cities, for example, Teamsters recruited 25 people to help them phonebank.

Teamster member David Kremer, who drives agricultural equipment at the University of Minnesota, explains that phonebankers are concentrating on areas where they think sentiment is strong for Pope—like his local, where an “Anybody but Hoffa” slate swept delegate elections by hammering on the Hoffa team’s love of multiple salaries.

Fellow member Laverna Wharam has been calling paraprofessionals who work with special ed children in the schools. “A lot of them are unaware of the election,” she said. “When I say I’ve been pretty disillusioned with the union and the men who are running it, and that I think it’s a job a woman could do, they’re like, ‘Of course we can get it done!’”

Until this campaign, Gegare had been a staunch Hoffa ally.

Gegare now denounces Hoffa for concessions made to UPS and the company’s freight division. But as chair of the Central States Pension Fund, covering Teamsters in 29 states, he said nothing when Hoffa let UPS walk away, greatly weakening the fund and putting members’ pensions in jeopardy.

Gegare is campaigning in few locals, mostly those of the officers on his slate who until recently were also Hoffa supporters. It’s unclear whether he will take more votes from 70-year-old Hoffa or from Pope.

Pope is running without a slate of vice presidents and executive board members. The reformers’ strategy was to run a single candidate, focused on the weakest link in the administration—Hoffa. (The Teamsters constitution also vests the president with impressive powers.)

That strategy worked to diminish the campaigning done by Hoffa’s slate-mates, but it has a down side. When members open the ballot, they’ll see the Hoffa slate, the Gegare slate, and Pope’s name alone. The uninformed voter who wants to register an anti-Hoffa vote might pick the candidate who has a slate.

For his part, Hoffa seems to see Pope as the main threat, directing most of his fire at her. TDU says that’s because Hoffa’s polls show that Pope is the only candidate who can beat him.

Sandy Pope and TDU like to claim that they are the victims of harassment when they campaign, but the truth is that the Teamster election is overseen by a government-run agency that metes out punishment to those that break the rules. The catch is that a protest must be filed by the offended party in order for a remedy to occur. It is a lot like what a union rep has to do when management harasses a union worker.

In your story you wrote,"Frank Halstead, a warehouse worker in Los Angeles, said that as he campaigns for Pope he sees a big difference from 2006. “Warehouses where the officers were hardcore Hoffa, we can now campaign without harassment,” he said."

Hmmmm? So Halstead is implying that there were widespread violations having to do with campaign harassment in the workplace in the last election (harassment that mysteriously went unreported to authorities). Is this the type of representation we can expect from Pope when we are harassed at work? That it will go unreported and we will just have to WAIT five years for it to get better on its own? With representation like that, it's no wonder Sandy Pope has lost 20% of her membership over the last five years.

The truth is that members don't like TDU and some voice that opinion when TDU campaigns at their worksites. Those same members express that displeasure by voting against TDU-backed candidates. That's not harassment, IT'S CALLED FREEDOM OF SPEECH! IT'S CALLED DEMOCRACY!

Real unionists hate so-called reformers like TDU and Sandy Pope who do nothing but tear down the union with their negativity. Over the last 12 years, TDU has failed to run ONE positive story about the Teamsters General President on its website. How is that PRO-UNION???