Teachers Are Singled Out in Attacks on Public Employees 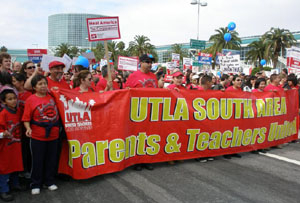 Los Angeles teachers and parents join with thousands of other unionists March 26 in a "We Are One" day of solidarity against attacks on workers in Wisconsin and everywhere. Photo: United Teachers Los Angeles.

Like other public employees, teachers find their collective bargaining rights under fire in the Republican-governed states. But the attacks on teacher job security and the drive to replace public schools with charters are universal—and bipartisan.

The other important trend is that some teachers are fighting back.

Governor Chris Christie unveiled proposals in mid-April to make it easier to strip teachers of job protection: a teacher who received a bad performance evaluation in any one year would lose tenure. Job security would come only after three consecutive years of good evaluations.

At least half of an evaluation would be based on student test scores—even though education researchers widely regard standardized tests as poor measures of either student learning or teacher performance. Moreover, linking job security to performance evaluations generally is an invitation to management favoritism and a handy tool for getting rid of those at the top of the salary scale.

Several thousand rallied in Trenton and Vineland April 27, while in Newark, Al Sharpton told teachers and other public workers that Wall Street bankers “have become the sacred cow that can’t be touched, while workers become the slaughtered lamb.”

Governor Rick Scott signed a “Student Success Act” in March that puts newly hired teachers on one-year contracts, with renewals based primarily on student test scores. The measure also weakens the job security of tenured teachers: two bad evaluations in three years would subject them to firing. Layoffs would be based on evaluations, not seniority.

Other bills moving through the legislature target all public employees unions. One would require unions whose membership falls below 50 percent in a bargaining unit to hold recertification votes each year. Another, which opponents are calling the “union gag bill,” would prevent public employers from deducting union dues or voluntary deductions for political action from workers’ paychecks.

The Florida Education Association brought members out for an “Awake the State” day that featured rallies in 22 cities—drawing up to 2,000 in Miami and Tallahassee and 500 to 1,000 in smaller cities.

“Things are very doomy here in Florida for public employees and students,” said FEA President Andy Ford. On the other hand, “every time we’ve been attacked, we grow stronger.”

By a unanimous vote, the Illinois Senate passed a bill in mid-April that would weaken seniority, virtually eliminate the right of Chicago teachers to strike, and tie job security to teacher evaluations.

For layoffs, seniority becomes a tie-breaker after evaluations are taken into account.

After two unsatisfactory evaluations in seven years, teachers would be dismissed, and would potentially have their Illinois teaching licenses revoked.

Finally, Chicago teachers only—long singled out in the state’s school legislation—are subject to a new rule on strike approval: 75 percent of all unit members, not just those voting, must vote “yes” for a strike to be legal.

Mass layoffs and new teacher seniority rules threaten to up-end Los Angeles schools, thanks in part to a controversial court case. The district is sending layoff notices to more than 5,000 of the city’s 40,000 unionized teachers, claiming a $400 million deficit.

The layoffs will test the impact of new seniority rules, based on the January settlement of an ACLU-led class-action lawsuit against the school district. The ACLU claimed that low-income students of color were suffering educational inequity because their schools, with predominantly new teachers, experienced exceptionally high turnover each year due to seniority-guided layoff rules.

Under the settlement, 45 schools will be protected from layoffs. The result: hundreds of teachers with one or two years’ experience will be favored over teachers with as much as 10 years.

United Teachers Los Angeles has appealed the settlement and launched a long-term plan to fight both the layoffs and the district’s privatization push. It began with a mass picket and packing of the L.A. school board meeting March 15. Escalating actions are planned for the week of May 9-13, as part of statewide coordinated actions led by the teachers unions in response to huge impending state budget cuts.

Three new laws passed in April under the guise of school reform—two of them shredding teacher rights and one threatening to replace teaching positions with computers. The heart of the three, a measure called “Students Come First,” limits teachers’ collective bargaining rights to salary and benefits only, and a local union may bargain only if more than 50 percent of teachers have joined.

The law eliminates tenure for new teachers, instead offering them one-year or two-year contracts. And even teachers who have continuing contracts can be terminated without just cause. “A continuing contract won’t mean much under the new law,” warned Sherri Wood, president of the Idaho Education Association. “If the superintendent’s daughter-in-law needs a teaching job, a longtime teacher might discover herself out the door.”

The IEA organized protests across the state, including a hands-around-the-Capitol action in Boise that drew 1,000 teachers and supporters. The IEA now seeks to reverse the bills through voter referendums. They must collect 48,000 signatures by June 1—on each of three petitions—in order to put the three measures before voters next year.

Governor Brian Sandoval is pressing for a voucher program to facilitate privately run charter schools and seeks to eliminate teacher tenure and seniority in layoffs.

In New York City, where up to 6,100 teacher layoffs are in the works, Mayor Michael Bloomberg is pressing to eliminate the district’s “last in, first out” seniority provision for layoffs, substituting evaluations driven by student test scores.

Democratic Governor Andrew Cuomo prefers instead a proposal to weaken seniority through a mix of evaluations and seniority in deciding which teachers get the axe. The leadership of New York City’s United Federation of Teachers thought that was good enough to ask members to “call Governor Cuomo to tell him that we appreciate his leadership on workers’ rights and our schools.”