Is Working Alone Undermining Solidarity in Your Workplace? 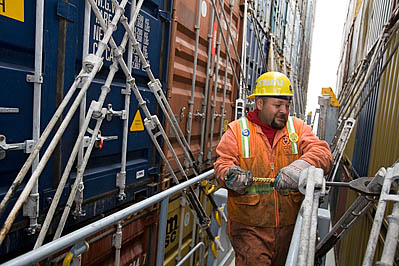 Solidarity is at the core of union power and depends on connections among workers created in the course of interaction in the workplace. But management is changing work to isolate people. Photo: Jim West | jimwestphoto.com.

Solidarity is at the core of union power and depends on personal connections among workers, created in the course of interaction in the workplace.

But management is changing work in ways that isolate people and eliminate opportunities for interaction. People are increasingly “working alone,” and the potential for collective voice is suffering.

To build solidarity and a tendency toward collective action, we need shared experiences. The collective experience of oppression at work leads to collective reaction. And social interaction builds commitment among co-workers and helps us create and enforce norms of behavior. Even in non-union workplaces, rate-busters are “disciplined” through informal pressures to conform.

Eight interconnected trends are working to destroy our connections in the workplace:

Working Together: A Personal Example

Years ago I worked as a heavy steel fabricator at a shipyard outside Philadelphia. I bummed cigarettes, talked sports, and complained about the cold, the welding smoke, and the bosses with co-workers who I spent more waking time with than I did my family.

These interactions tied us together as co-workers facing common struggles. Although solidarity was never mentioned, it was built daily. We were creating links, binding us together in powerful ways.

I was on the third shift doing a job that hadn’t yet been de-skilled and standardized and that required communicating and coordinating with others. The non-standard nature of the job, the built-in stopping points within the work process (waiting for materials, tools, or assistance from other crafts), the need to work with others (welders, burners, riggers, crane operators) all made for lots of social interaction.

We spent time together, we took care of each other. It was not uncommon for us to go to each other’s houses after work, to help each other move, to spend time with each other’s families, and to go to the bar for a few drinks.

One night the second shift shop steward, a crane operator, was sent home for refusing an unsafe lift. Our steward made it clear that a walkout would not be an unwelcome response.

Our crew discussed what to do. After a while, Dan, one of the older workers, said he was walking out, regardless of what the rest of us did. At that point the discussion changed. The question of whether to walk out over the suspension transformed into a question of whether we would let Dan walk out alone and lose his job.

The answer was clear. There was no further debate. Activists and non-activists alike walked out with Dan.

Downsizing through automation, speed-up, and spreading work around. Large workplaces with thousands or even tens of thousands of workers used to create literally millions of opportunities for social connection. They’re disappearing.

Instead, automation and speed-up have cut jobs while communication and transportation advances allow work to be distributed to multiple sites, reducing the numbers in any single location.

Restructuring/intensification/standardization. Core to management schemes such as Continuous Improvement, Six Sigma, Kaizen, Lean, 5S, and the Toyota Production System is the elimination of times within the work process (sometimes called “waste”) when production pressures might lessen and allow informal interaction.

No downtime or micro-breaks, no conversation.

Combining jobs reduces opportunities for interaction. When I had to ask someone to repair a part, or make a crane lift, I also had the opportunity to chat about the Eagles or the latest outrage at work. If the worker is doing it all him or herself, there’s no one to talk to.

Monitoring. With technologies like GPS, proximity readers and swipe cards, video surveillance, and computers, few workers escape monitoring. Workers are always on stage and are less able to stop and talk. Truck drivers in open-pit mines with GPS in their trucks, for example, report that if they stop for even a short period they are called on the radio and warned to get moving.

Computerization. While the information revolution has definitely increased communication, the impact in the workplace is more complex when it comes to informal interaction among workers. Computerization allows companies to isolate workers in control rooms, at home, or in remote locations, eliminating direct contact with co-workers. Funneling information through electronic channels also limits the personal content that is critical to building connections.

If I call someone from a different office to ask for information, I am very likely to chat with that person as well. If I have to walk over to another office, I’m likely to run into others and have a talk. If I go on the computer to get information, I chat with no one (especially if it is monitored).

As one medical worker put it: “There is a lot more communication, and a lot less interaction.”

While electronic communication can work for mobilizing, it does not replace the regular face-to-face interaction that occurs in the course of work.

Changing schedules. Shift change has always been an important time for social interaction. Solidarity is built at the coffee shop, in the bar, or during the walk to and from the parking lot.

But eight-hour, stable-shift work is rapidly disappearing. Twelve-hour shifts, rotating shifts, part-time work, split shifts, staggered shifts, irregular shifts, and forced overtime are undermining shift change social interaction. Some workers, such as nurses, might welcome a 12-hour day and a three-day week—but who’s going to hang out with co-workers after a 12-hour day?

Contractors and temps. Offsite contracting reduces opportunities for interaction among workers who are part of the same work process. Even the use of on-site contractors affects the common experience of work. Different bosses, different pay and working conditions, different schedules all limit cohesion. Interaction is often strained because contracted employees are blamed by the incumbent workforce for job loss or deterioration of working conditions.

WHAT NEEDS TO BE DONE

The crisis of solidarity is playing out in nearly every workplace in the U.S. and around the world. To protect solidarity as an organic force, the labor movement must first acknowledge the problem, evaluate changes in technology and work organization for their impacts on social networking, bargain over those changes, and create union programs that build social interaction both at and outside of work.

Charley Richardson is a labor educator. We want your stories about how changes in the work process have eliminated social networking and what you and your co-workers have done in response. Please write to Charles_Richardson [at] uml [dot] edu or call 508-277-9466.

A version of this article appeared in Labor Notes #382, January 2011. Don't miss an issue, subscribe today.
Related
How E-ZPass Workers on Staten Island Are Building Power During the Pandemic »
Relieving Racial Resentment in Our Unions »
Time for Labor to Up Our Game on Racism »
In Wake of Charlottesville, How Can Unions Fight for Racial Justice? »
A How-To in Solidarity: Teacher Takes Turkeys to Teamsters »

I find this an excellent analysis of how workplace solidarity is being structurally undermined. When I first worked in an auto plant more than 30 years ago we were right next to, and across from, each other.

When I retired five years ago, my closest coworker was shouting distance away.

Is Working Alone Undermining Solidarity in Your Workplace? Solidarity is at the core of union power and depends on personal connections among workers, created in the course of interaction in the workplace. But management is changing work in ways that isolate people and eliminate opportunities for interaction. People are increasingly “working alone,” and the potential for collective voice is suffering. To build solidarity and a tendency toward collectiv...