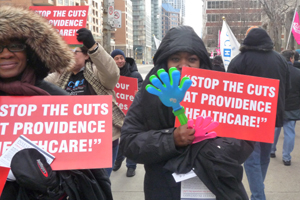 By stepping up its fight to protect quality public health services and challenge the corporate push for privatization, an Ontario alliance of community organizations and unions has consistently notched victories. Last year saw several successes, including:

• In Cobourg, 70 miles east of Toronto, Northumberland Hills Hospital planned to cut beds and services, with the expected loss of 45 full-time-equivalent jobs. A coalition campaign forced the hospital to roll back the cuts.

• At a community hospital in Cornwall, 60 miles southeast of Ottawa, the coalition stopped the planned closure of an operating room and forced the government to re-fund the hospital with $14 million.

• On St. Joseph Island, near the intersection of Lake Superior and Lake Huron, the coalition stopped the proposed shutdown of a community hospital.

The organizing situation in Ontario is in some ways different from that in the U.S., given that Canadian health care is built on a universal health plan with government-provided insurance. Yet the challenges of protecting public services in Canada are much the same.

Partly because of cutbacks in provincial and federal budgets, many services traditionally handled in hospitals are being spun out to poorly regulated nursing homes or home-care services—which private, for-profit ventures gobble up. And corporate and right-wing interests attack the national insurance and public health care institutions at every turn.

Unions provide the core funding for Ontario Health Coalition, the group that leads the fights. But they avoid the pitfalls of the usual coalition model, in which unions call the shots and community forces are minor partners.

Rather, community participants have a shared role directing the project, which helps sustain organizing over the long haul. Some campaigns are initiated by community members.

OHC boasts more than 50 local health coalitions across the province and a network of 400 community and labor organizations.

Patty Park is a retiree activist who co-chairs the local health coalition that rolled back cuts this year at Northumberland Hills. When the cuts were announced, the hospital workers’ union and the local coalition formed a ready partnership.

“The union members in our coalition came as partners, fellow volunteers,” Park said. “It wasn’t simply a jobs issue. The union members were concerned, just like the community was, about the kind of health care they and their families were going to get.”

Led by executive director Natalie Mehra, OHC conducts its fight on many levels—from reports and studies and conferences, to legislative and court actions, to grassroots action campaigns with rallies, door-to-door petitioning, and media events.

Some local groups have organized community plebiscites in which residents vote on the privatization of a local hospital. While the plebiscites are non-binding, they educate the community about threats to their public health service.

The campaigns are waged by the coalition’s city or neighborhood chapters that coordinate with OHC but maintain their autonomy.

“The local will call a meeting of all the members in the affected facility. We explain what an anti-privatization campaign looks like—by now we have a standard routine because we’ve done it so many times,” said Michael Hurley, president of the 26,000-member Ontario Council of Hospital Workers.

“We ask the members if they are prepared to do what it takes. Will they do an informational picket? Will they knock door to door to ask residents to take lawn signs? Will they picket politicians’ offices? Then the members take a vote yes or no.”

If the members vote to fight, they reach out to the existing local health coalition, or work with others to form a coalition. (If they choose not to fight, then services may get cut without protest.)

The strategy grew up in the 1990s, when the province’s Conservative Premier Mike Harris began closing public hospitals and laying off hundreds of nurses and other staff. The coalition fought strongly and all of Ontario’s hospitals remained public.

Unable to beat the coalition on privatization, many hospitals have turned to public-private partnerships, in which a private company owns and maintains the building while the hospital within remains publicly operated. Four of these currently operate in Ontario, and 24 more have been announced. Hurley says they’re another route toward privatizing.

Service quality at public hospitals continues to deteriorate with the budget crisis, and privatization has encroached in other provinces, reflecting weaker coalitions that can’t sustain long fights. Large numbers of private clinics have opened in British Columbia.

Is there any alternative to perpetual warfare, fighting hospital privatizations and service cuts one by one?

Not likely, Mehra says, “especially since we sleep next to the elephant—the largest private health industry in the world is in the U.S.”

But instead of the usual ad hoc coalition that disappears after the immediate campaign is over, OHC has fostered local coalitions that are more or less permanent, capable of sustaining struggles for quality public health care year after year.

A version of this article appeared in Labor Notes #382, January 2011. Don't miss an issue, subscribe today.
Related
After Strike Threat, Wisconsin Nurses Get a Possible Path to Union Recognition »
Wisconsin Nurses Set to Strike, As Employer Claims It's Banned from Bargaining »
Labor Must Rise Against Vaccine Apartheid »
Striking Massachusetts Nurses Outwait Corporate Giant Tenet »
Review: How Labor Can Stop ‘The Privatization of Everything’ »