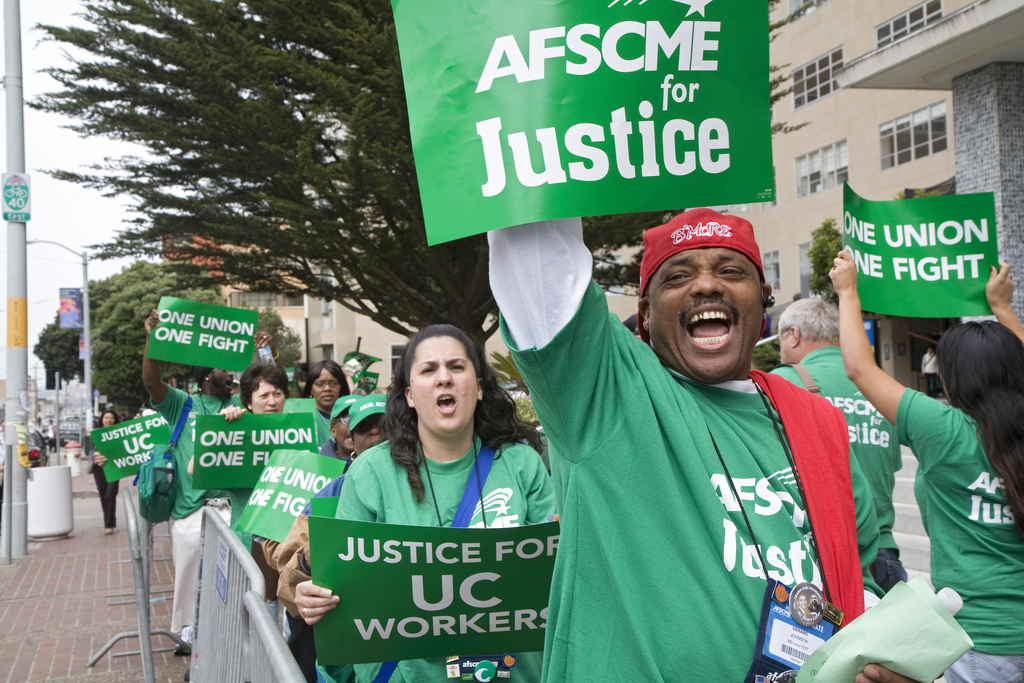 Dumping on public sector workers is so “common sense” these days that even a few fellow unionists are piling on. The head of the New York City building trades council, Gary LaBarbera, just joined the business-backed “Committee to Save New York,” a group formed solely to advance Governor Andrew Cuomo’s war on public sector unions’ pay and pensions.

Using a line lifted straight from the Chamber of Commerce, LaBarbera said that “without a fiscally sound environment, we will not be able to attract new businesses to the city.”

LaBarbera’s only mouthing what the higher-ups are telling us: the deficit is the greatest threat the country faces, and public unions have engaged in a “silent coup,” as Minnesota Governor Tim Pawlenty put it, taking over government and running it into the ground with supposedly outsized pay and benefit packages.

Labor is bringing down the government and crushing economic recovery? The era of upside-down politics is upon us.

Lawmakers across the political spectrum spent a generation giving big business a free hand in everything from trade policy to environmental protection to financial oversight. But two years after Wall Street crashed the economy, they’ve found a more convenient scapegoat. Those actually responsible for our economic mess have slipped out of the spotlight—though they’re still setting the country’s economic agenda.

LaBarbera and Pawlenty preach “fiscal sanity,” but Congress doesn’t dare go where the money is and raise taxes on the rich—they’d rather rob the Social Security trust fund. No one seems to remember that the richest Americans paid twice as much federal income tax under Nixon as they do under Obama.

This collective amnesia makes it easy to point the finger at public employees, but it’s also pushing lasting solutions further out of reach.

Despite Washington’s current bout of self-loathing, government spending is a central part of today’s economy and key to its recovery. Last year government outlays accounted for 20 percent of all economic activity, and 22 million people work in federal, state, or local government jobs.

Cutting their pay and laying them off will drive unemployment officially into double digits and extend the economic slump that’s killing the bargaining climate for everyone. And yet hundreds of thousands of city, county, and state workers are bracing for pay cuts and pink slips this year.

When Wall Street speculation drove us to the brink of another Great Depression, it wasn’t the captains of industry who stepped in. It was government—and everyone, from workers to bankers, demanded it do so. For a moment, the idea that government should do something was on the table again.

Beltway politics have snapped back from that moment like a rubber band, but labor shouldn’t lose sight of the fact that big problems require big solutions. Government will always be needed to do things markets can’t or won’t.

The Great Depression of the 1930s led to the creation of unemployment insurance and Social Security. It redefined what people expected from their government. A new common sense took root—government can and should do more. This outlook helped inspire everything from seat belts to food safety rules to standards for healthy workplaces—every reform an intrusion on the unfettered workings of the market.

Labor officials like LaBarbera seem to have forgotten that it was their forebears who led the charge for government to improve our lives and protect the little guy from the brutality of the market. The common sense that government can and should act to relieve the suffering of its citizens wasn’t the product of high-minded debate in Congress. Lawmakers moved because tens of thousands took to the streets and sat down in their workplaces, demanding change.

WHAT DO WE WANT?

Today plenty of public sector unions are hiding from the resentment the right is whipping up. But if the past 30 years have taught us anything, it’s that keeping your head down doesn’t stop the bleeding.

Plenty of public sector unionists do get it. They’re working together for a strong and expanded public sector:

Teachers in California are taking on the small-government ideology directly with a counter-education and mobilization campaign. Health care unions and postal workers in Canada are linking arms with the communities they serve. Chicago teachers are fighting school closings and the de facto privatization of education.

These unions are championing the issues that matter most for our communities, defending the public good and serving as watchdogs on cronyism and corruption. They know that the common good is not the same as a healthy bottom line for corporations. These are labor’s values, the antidote to the dog-eat-dog individualism of the market.

Banks and big corporations are once again sitting on mountains of cash, and the rich have been stuffing their pockets for decades. The resources are there to tackle today’s big problems: unemployment, the environmental and energy crises, health care and retirement security for everyone.

We can put society’s resources to work in the public interest. The question is whether we’ll keep accepting what we can live with, or start fighting for what we deserve.

A version of this article appeared in Labor Notes #382, January 2011. Don't miss an issue, subscribe today.
Related
Review: Don’t Bleed in the Shark Pool »
‘No Contract, No Matisse’: Philadelphia Museum of Art Workers Win First Contract After Strike »
Viewpoint: Support Veterans by Defending, Not Defunding, Public Sector Jobs at the Post Office and the V.A. »
Workers Building New U.S. Embassy in Honduras Strike over Severed Fingers, Illegal Contracts »
Review: How Labor Can Stop ‘The Privatization of Everything’ »

Instead of bringing up the ceilings for all workers, so called the "leaders" in the movement are going in bed with neo-liberal and neo-conservative politicians to get what little crumbs are thrown at them. Those leaders should step down and let the progressive and forward thinking folks take over the leadership.