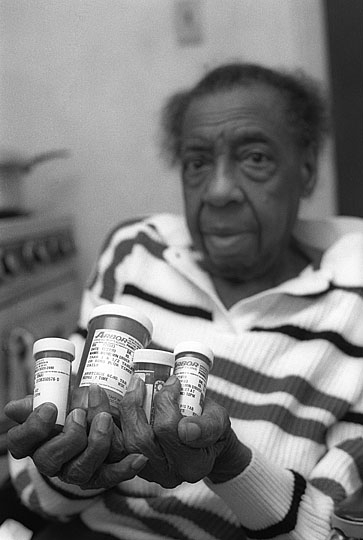 Social Security is the only income for 14 percent of seniors. For half of elderly unmarried women and widows, it provides more than 90 percent of income. Photo: Jim West.

The Big Lie technique is working. Polls show that six out of ten Americans who aren’t yet retired think Social Security won’t be there for them—with the youngest workers the most pessimistic. And more than half of current retirees predict their benefits will be cut.

When your co-workers tell you Social Security is a bankrupt lost cause, set them straight. Here are the facts.

Fact: Congress planned ahead in 1983 for the retirement of the baby boomers. The system has been collecting extra payroll taxes since then. For example, in 2008 Social Security took in $49 billion more in payroll taxes and $131 billion more in interest and other income than it paid out in benefits and expenses.

That foresight has enabled Social Security to amass a $2.3 trillion surplus now, and by 2024, the surplus will peak at $4.2 trillion. There’s plenty to keep paying benefits with no cuts for decades.

As MoveOn says, “Any politician who insists Social Security is broke probably wants to break it themselves.”

True, the baby boomers will eventually create a strain: beginning in 2037, the surplus will be gone, and Social Security’s revenues will only be enough to pay 78 percent of scheduled benefits. But that shortfall is easily fixable—read on.

Lie #2: We must cut benefits today if we want to have any money left for our kids.

Fact: There’s an easy and equitable solution: make high earners pay their fair share. Today, most workers pay the 6.2 percent FICA tax on their entire incomes. But the fortunate ones—roughly the top 6 percent of earners--pay FICA only on their first $106,800. Eliminate that cap, keep their benefits the same, and we’d end up with another surplus after 2037.

In a July Gallup poll, two-thirds thought abolishing the cap was a good idea, including a majority of Republicans. Doing so seems especially fair because in recent years those at the top are just about the only ones whose income has increased—and the only ones whose life expectancy is going up, too.

In that same poll, 63 percent thought raising the retirement age was a bad idea.

One other revenue source: put a tax of just half of 1 percent on each stock transaction. That would cut down on Wall Street speculation and produce enough money to make Social Security solvent for the next 75 years—and raise benefits, too.

Lie #3: The government has raided the Social Security Trust Fund to pay for other programs; there’s nothing left but IOUs.

Fact: The Trust Fund contains interest-bearing U.S. Treasury Bonds, generally considered the safest investment in the world, backed by the “full faith and credit of the United States.”

Fact: The biggest whopper yet. Nearly two out of three seniors depend on Social Security for more than half their income, and for 14 percent of seniors it’s their only income. It’s obvious how important Social Security is to keeping people out of poverty.

Social Security is especially crucial for women: for half of elderly unmarried women and widows, it provides more than 90 percent of their income. And that’s with women’s average annual benefit only $11,000!

It’s worth mentioning that retirees and those nearing retirement have been the primary victims of the economic collapse that began two years ago: they’ve lost more than $10 trillion in the value of their houses and stocks--which they don’t have years to recoup. Attacking these folks’ Social Security would be a double whammy.

Fact: By law, Social Security must pay its own way. It has its own Trust Fund separate from the federal budget. See Bipartisan Fervor to Whack the Old Folks.

Lie #6: There’s nothing we can do to stop Congress from messing with Social Security.

Fact: In 2005 unions and a host of other organizations mobilized to stop George Bush and his friends on Wall Street from throwing Social Security’s money into the stock market (how’s that idea looking today?)—and succeeded.

We’re doing it again—big coalitions have formed to fight back. See StrengthenSocialSecurity.org.

Too many people have too big a stake in Social Security to let it be the sacrificial lamb in a new austerity offensive. This year 52.7 million people, or about one out of six U.S. residents (one out of four families), received benefits, including retirees, the disabled, and survivors, including children.

A few days ago President Obama said he couldn't guarantee Social Security checks will go out August 3. Where are those treasury bonds set aside to pay us retirees?